Despite its weird theme, Andrewâs Wurm deck seems to be working for you. You drew both an Urza's Incubator and a Heartbeat of Spring in your opening hand, so you havenât had any trouble with your creaturesâ high mana costs.

Unfortunately, Andrew seems to be having slightly more success with his Orzhov Bleeder deck. With your Heartbeat of Spring and his early Mobilization, heâs been able to hold off your Wurms rather well. Your offense slowed to a crawl when he pinned down your only trampling creature with Pillory of the Sleepless, and he stopped entirely when he drew and cast his Peacekeeper a few turns ago.

Last turn, Andrew went all in, taking advantage of the mana on the table to cast both Baneful Omen and Seizan, Perverter of Truth. Then, after exiling his Obzedat, Ghost Council at the beginning of his end step, he revealed that the top card of his library was a Debt to the Deathless; letâs just say that youâre looking at a lot of pain when his next turn begins.

Thinking that the game is probably over, you let Seizan hit you for 2 more during your upkeep in exchange for a couple of additional cards. The Hornet Sting and the Mercy Killing were a complete surprise; you assumed that the Wurm deck didnât have any removal at all. On top of that, your draw step gave you an Emerald Charm, which looks good against any of Andrewâs non-Aura enchantments.

Now that you have some additional tools, itâs time for you to think about your next move. Andrew is sitting contentedly behind his blockers and bleeders, so itâll be quite a surprise if you pull out a win from your bag of tricks. But how?

It is the beginning of your first main phase. Defeat Andrew before he defeats you. 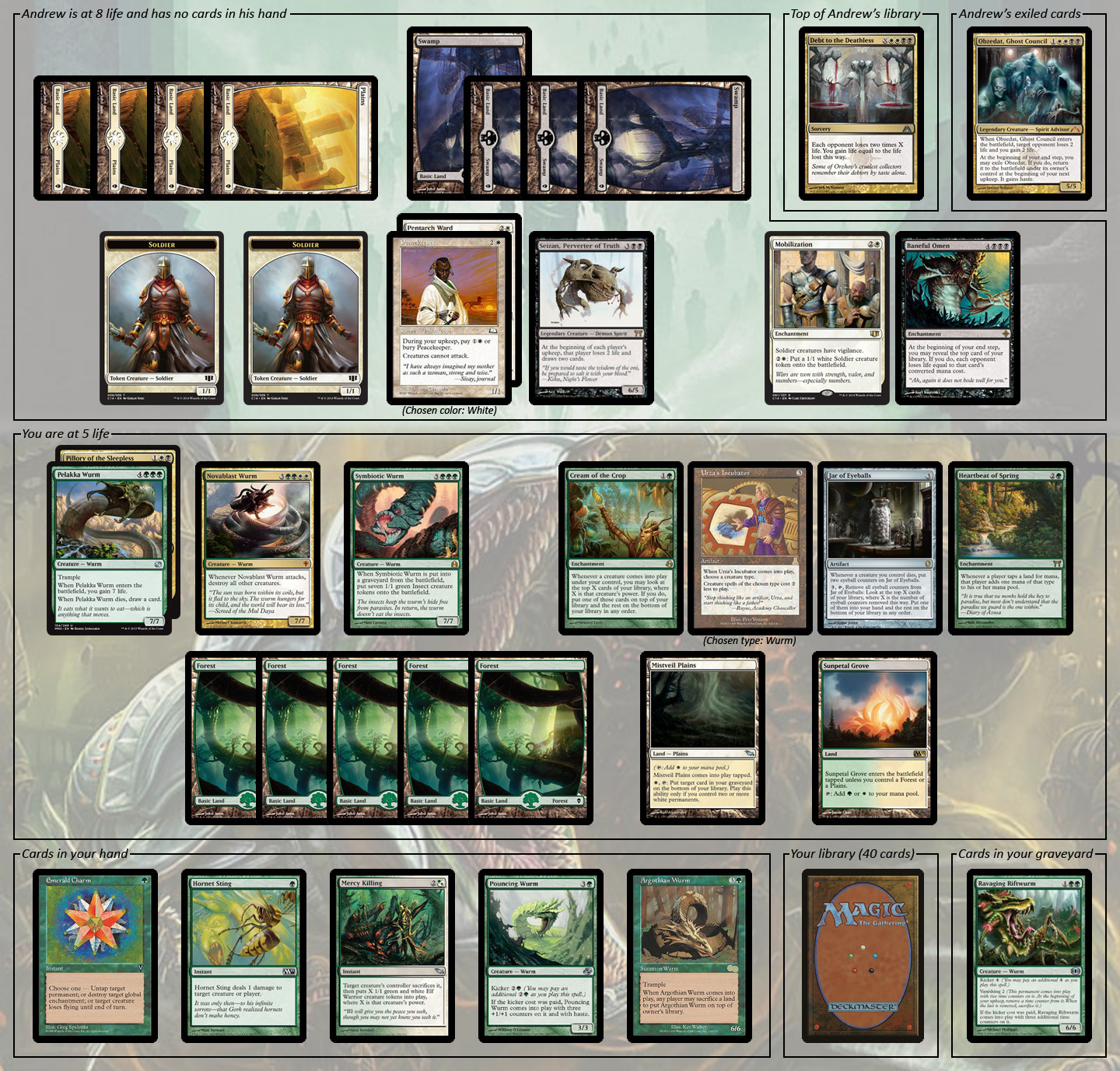 You are at 5 life with the following cards in play:

You have not yet played a land for this turn. You do not know the identity of any of the remaining forty cards in your library.

You didnât bother looking through the Wurm deck before you borrowed it and shuffled it up, but Andrew has a one-track mind when it comes to themes like this: Youâre certain that every creature card in your deck is a Wurm. You just donât know which Wurms Andrew used or whether he used them all.

Andrew is at 8 life and has no cards in his hand. He has the following cards in play:

You know what the top card of Andrewâs library is because it was revealed by Baneful Omen last turn:

Andrew has one relevant card in his exile zone because he activated its ability on his previous turn:

You do not know the identity of any of the other cards in Andrewâs library.

If you think you have a great solution in mind, donât put it in the comments! Instead, send it to puzzles at gatheringmagic dot com with the subject line âPuzzle â Turning the Wurmâ. Weâll include the best ones in next weekâs article along with the next puzzle!

First, it's pretty clear that connecting in combat is more or less out of the question, as Skye has far too many blockers to make that a viable avenue. So the first step is seeing where we can make damage happen outside the combat step.

After some looking around, we see four sources of noncombat damage: Pitiless Horde's upkeep trigger, Qarsi Sadist's exploit trigger, Ruthless Ripper's unmorph trigger, and Kheru Bloodsucker's creature-with-4-or-more-toughness trigger. The question then becomes, How do we use these?

We need to give Skye back her Pitiless Horde, but the only way to exchange Pitiless Horde is to have our opponent play a creatureâ.â.â.âwhich is not normally something we can do, but Skye has a Sultai Emissary, which will manifest when it dies, and we have a Heart-Piercer Bow.

That solves one of our problems, but Qarsi Sadist can only account for 2 life, and that manifested creature could be anything. I mean, it's not as though we have control over the top card of theâ.â.â.âwait, Set Adrift? I guess we do.

But by then, we would have already attacked, so we can't use Sultai Scavenger or Merciless Executioner. Sultai Emissary will be dead, and there's nothing we can feed to Kheru Bloodsucker, so that leavesâ.â.â.âoh, hello, Ruthless Ripper, how would you like to come work for us?

With that in mind, the only challenge involves finding a way to play the necessary cards. Fortunately, we have more than a few methods of paying our delve costs. Tony writes:

Tony also points out that the sequence of plays above is important: âWe have to cast Rite of Undoing after we already control Ruthless Ripper or else Skye will have a black card in hand to unmorph the Ripper and kill us.â

Interestingly enough, Bernd finds that we can still play Rite of Undoing before taking control of the Ruthless Ripperâin which case playing Despise is necessary:

Dashing the Reckless Imp was actually an effective, if unintentional, way to deprive us of a blocker,â Aaron says. âReckless Imp can't block, so she could have just attacked with her ground team at that point. Even if we had somehow survived combat (Douse in Gloom wouldn't have saved us if Skye had responded correctly), she could have always forced the Pitiless Horde upon us in her second main phase.

âSkye tried to be cute by sticking us with Pitiless Horde instead of dashing it,â Jeffrey adds. âHer board state implies that she had the mana to do so. Instead, she gave us the resources we needed that allowed us to swindle her out of the game. Brace yourself for more language that isn't fit for a family website.â