Itâs the final game of your current Magic Origins Draft match, and youâve managed to stabilize the table after a difficult midgame. Your opponent Orhan has the advantage in terms of board presence, but youâve removed most of his problem creatures and given yourself some breathing room.

In addition to that, you top-decked a Willbreaker on your previous turn, which drew an audible gasp from the matchâs spectators. After playing the Willbreaker, you immediately took control of Orhanâs Deep-Sea Terror, thinking that you could use it to dominate the battlefield after putting a few more cards in your graveyard.

Orhan didnât look too happy as he started his turn; in fact, after seeing the game slipping through his fingers, you suspect that heâs going on tilt. Orhan quickly played a Gold-Forged Sentinel from his hand and attacked you with it, possibly thinking that you were going to block with your last thopter token. Rather than play into his plans, you chose to take 4 damage from the Sentinel and go down to 3 life.

On his second main phase, however, Orhan spent his last 3 mana to cast Day's Undoing, which garnered another audible gasp from the crowd. You added another storage counter to your Mage-Ring Network in response, but you werenât paying too much attention at that that point. Instead, you were watching Mari out of the corner of your eye.

Your friend Mari didnât gasp like the rest of the crowd did. She frowned deeply, with a look of intense concentration on her face. As she watched you draw your seven cards from the Day's Undoing, her expression darkened further. Then, when you pulled a Bonded Construct as your draw for the turn, she turned around and marched out of the room.

You find Mari lounging around the front of the store afterwards. âDid you win?â she asks.

âYeah. I ended it on the same turn you left.â

âSo you saw it?â she asks.

âIt took me more than a few minutes,â you admit, âbut I did. He really wasnât happy about that.â

âWell, of course not!â Mari snaps. âThat was a really bonehead move he pulled. He should never have played that Day's Undoing!â

It is the middle of your first main phase. Defeat Orhan this turn. 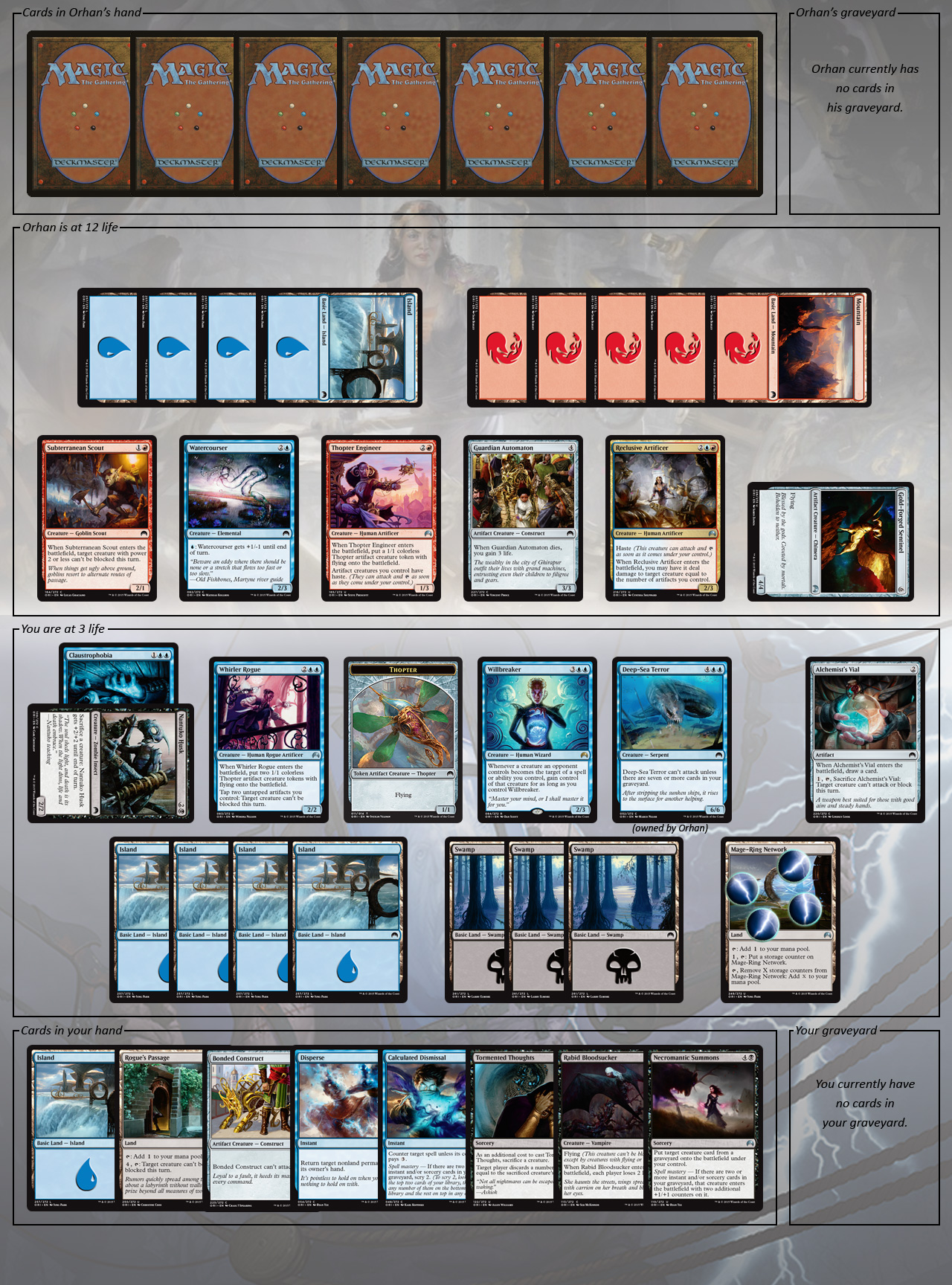 You are at 3 life with the following cards in play:

You have not yet played a land for this turn. You do not know the identity of any of the cards that are currently on top of your library.

You have no cards in your graveyard.

Orhan is at 12 life and has seven cards in his hand. He has the following cards in play:

You do not know the identity of any of the cards in Orhanâs hand.

Orhan has no cards in his graveyard.

If you think you have a great solution in mind, donât put it in the comments! Instead, send it to puzzles at gatheringmagic dot com with the subject line âPuzzle â Come Undoneâ. Weâll include the best ones in next weekâs article along with the next puzzle!

âOur success hinges on Revenant surviving the combat,â Andrew writes. â8 to 9 damage in the air is exactly what we need. However, Revenant is the only creature capable of blocking Charging Griffin, so we must block Charging Griffin with Revenant. As a result, we have to grow Revenant to 9/9 or larger before (regular) combat damage.â

âThe key to the puzzle,â Kha muses, âis realizing that Murder Investigation combos with Valor in Akros (which is a very weird Sealed deck, but hey, stranger things have happened). The question is, How do you make your Catacomb Slug die before the rest of your creatures die?â

As it turns out, you have two ways to kill the Slug: Valerieâs Consul's Lieutenant and your own Celestial Flare. Since itâs in your best interest to destroy your own Guardian Automaton as well, this works out nicely. Hyman writes:

âAlternatively,â Aaron writes, âyou can throw Guardian Automaton in front of Consul's Lieutenant and sacrifice Catacomb Slug to Celestial Flare. As long as Automaton and Slug both die before normal damage is dealt, the result is the same: two more creatures in the graveyard for Revenant, 3 life, three Soldiers, and +3/+3 to your team.â

Note that Skysnare Spider isnât obligated to deal its damage evenly between your Undead Servant and Anointer of Champions. However, this makes little difference, as Russell clarifies:

Skysnare Spider deals a total of 9 damage divided in some way between your 6/5 Undead Servant and 4/4 Anointer of Champions, which must kill at least one of themâand can kill both at Valerie's discretion.

On your next turn, Valerie has only a Knight token available to block with, and depending on her damage-assignment decision with the Skysnare Spider, you have one of the following:

In each case, Revenant can't be blocked, and if the Knight token blocks the largest available creature, 9 damage will still go through.

Matthew, Chris and Denis also pointed out that there is another blocking configuration that works, and itâs a good one. Chrisâs solution follows: