Your latest Magic Origins Draft gave you a rather nice Thopters deck, and you wasted no time using it to take down your opponents. Youâre now sitting comfortably in the second game of your last match of the day, trusting your deck to see things through to the end.

Stella, your opponent, had an interesting Draft as well: Sheâs playing an Elf-heavy deck, and after a disaster of a first game, she decided to bring in a lot of anti-flyer cards from her sideboard. This brought her deck from âpushoverâ to âheavy resistanceâ and made your second game more than a little contentious.

Over the course of the last few turns, you managed to bring five Thopter tokens into play while Stella was flooded with lands. She did end up with two reach creatures, though, so you had to hold your air force from attacking. Fortunately, you drew your Ghirapur Aether Grid at some point, and you found it useful in sniping Stella from a distance.

On Stellaâs last turn, however, she turned the tables on you by casting Eyeblight Massacre and almost wiping your side of the table clean. She then cast Necromantic Summons (with spell mastery) to retrieve the largest flyer in a graveyard, which happened to be your Scrapskin Drake. Finally, she used the last of her mana to cast Fleshbag Marauderâwhich finally gave you the chance to counter it with Calculated Dismissal.

The Dismissalâs spell mastery effect let you scry two cards, so you looked through the top of your library for a way to bounce back. You found a Fiery Conclusion and an Act of Treason there and decided to keep bothâputting the Conclusion on top so that you would draw it first.

Eventually, Stella decided to defer her attack to her next turn. You werenât too surprised at that: She knows you have a Hydrolash in your deck, and at 5 life, so she wasnât going to take the risk. With a strong defensive line in place, you imagined that she wasnât too concerned at the possibility of you breaking through.

As it turns out, she had every right to be worried. It takes you a while to see it, but you manage to spot the win on the table. Between her mana flood, her mass shattering of Thopters, and her hesitation to attack, Stellaâs not going to be very happy at the sudden turn of events.

It is the start of your first main phase. Defeat Stella this turn. 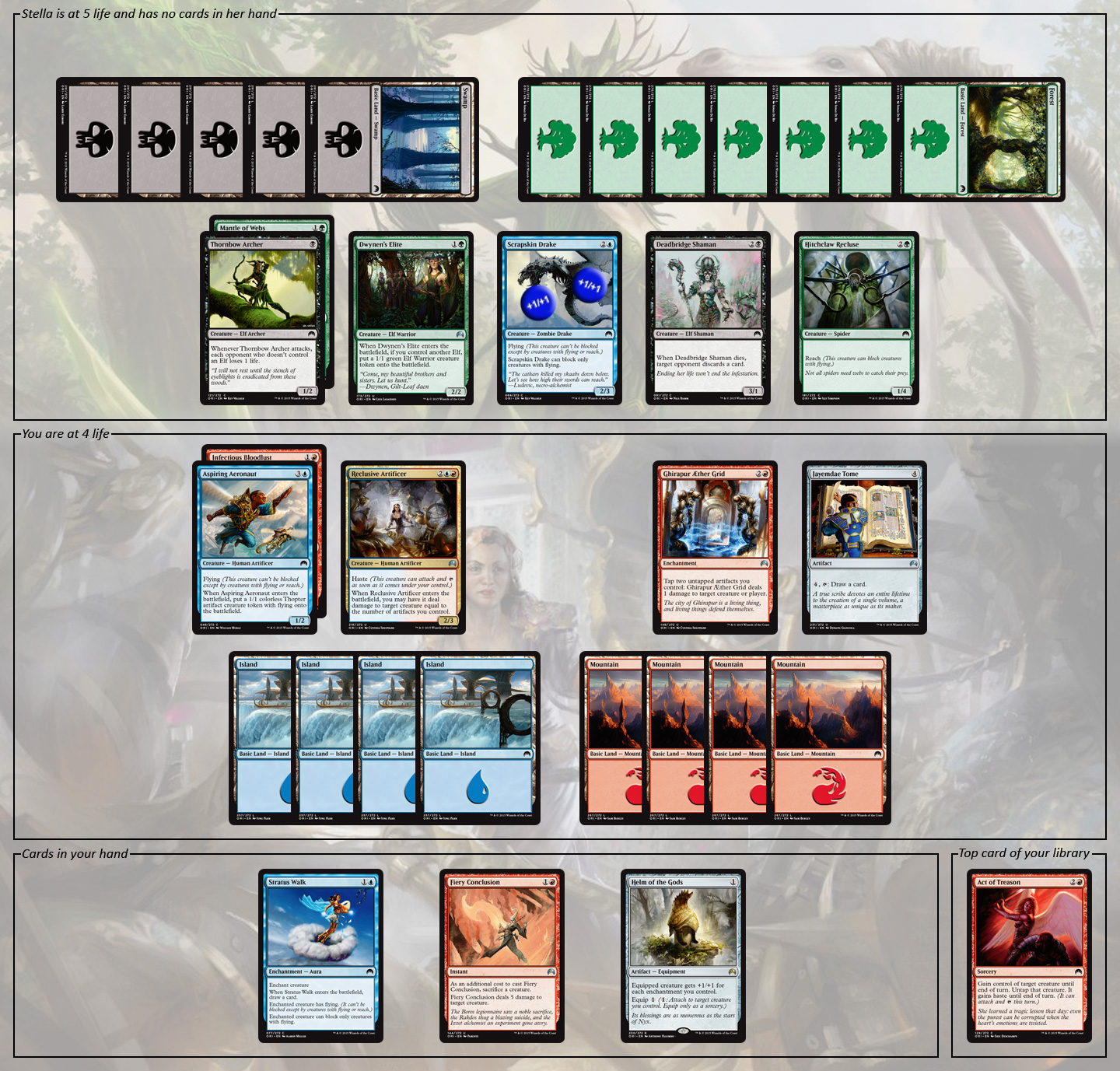 You are at 4 life with the following cards in play:

You currently have an Act of Treason on top of your library. In addition to the other cards remaining in your deck, you know that you have exactly one more copy of Infectious Bloodlust somewhere in your library.

Stella is at 5 life and has no cards in her hand. She has the following cards in play:

If you think you have a great solution in mind, donât put it in the comments! Instead, send it to puzzles at gatheringmagic dot com with the subject line âPuzzle â Broken Dreamsâ. Weâll include the best ones in next weekâs article along with the next puzzle!

Several respondents noted that this puzzle was particularly interesting: âThe path to victory is clear from the start,â Quadrangolo Tetra writes, âbut the sequencing isn't straightforward at all.â

âFollowing in the sage advice of the great Detective Holmes,â Matthew Harvey notes, âwe must eliminate the impossible then whatever remains, however improbable, must be the true path to victory. So let's start there and see just what is impossible:â

âThe trouble is,â Chris Cordell continues, âyou have to pump the graveyard with Elementals to send 16 damage through. There are seven Elementals that can be in the graveyard when you activate Sunflare Shaman's ability. Thus, you need to activate the Shaman a minimum of three times to kill your opponent, since at maximum, you only deal 14 damage from two activations.â

There are, of course, alternate solutions. Aaron Golas points out a variant that puts Cytoplast Root-Kin into the graveyard:

Another interesting approach involves using Grinning Ignusâs ability, not once, but twice. Austin Callisonâs solution picks up after you deal 4 damage to Watson at the end of his turn (and grafted a counter away from Cytoplast Root-Kin):

âI was banging my head against my desk for a while,â Austin admits, âthinking I had no way to put enough creatures into my graveyard fast enough, until I remembered the old activated-abilities-are-grenades analogy and also realized that Sunflare Shaman doesn't actually target itself with its ability.â