"Well, it's not like I have any other options."

"Wait, what?" you ask, raising an eyebrow.

"Even though I'm at one life?"

"Technically," Riku points out, "most of my creatures are smaller than yours. If I send in everything I've got, I'll be attacking you with three 1/1s and a 3/6."

"But that'll be four creatures against three blockers."

"You could block my Radiant's Dragoons, Unruly Mob, and Tuktuk the Explorer, then sacrifice your Thrashing Brontodon to kill my Triskelion."

"Yeah, but that'll get Tuktuk to give you a 5/5 artifact creature without the Brontodon to stop it."

"Not if you block Tuktuk with your Brontodon itself," Riku points out. "No, I think I can wait a little longer. Besides, I'm at fourteen life - I can afford it."

You nod. Part of what makes the Unabridged Cube so entertaining is that you can have tactical discussions like this. With the presence of one of each card ever printed, there's also the question of interesting interactions to consider: There's not a lot of other environments where you could steal your opponent's Stun Sniper with Animate Dead, then use it to lock down his 3/3 flying dragon.

Riku taps six lands and plays the only card in his hand, a Bellowing Aegisaur. That doesn't look good for you at all, but you can understand that your opponent is building up enough creatures to overwhelm your blockers. Now you're under pressure to draw another creature card on your next turn, just to make sure you can stop getting one point of damage through your front line.

"If you had some +1/+1 counters left on your Triskelion," you point out, "then you'd have a nice combo there."

"The thought did cross my mind, "Riku says. "That's how I won my first match. That probably wouldn't be the case here, though."

"Anyway," Riku laughs, "it's your turn. Let's see if that Volrath of yours is as good as it looks."

Despite appearances, Volrath, the Shapestealer has been underperforming for you so far. You're usually up for taking any of the Unabridged Cube's preview cards out for a spin, but in this case the Volrath you cast last turn has been acting more like an insurmountable wall for your opponent. It's a 7/5 wall, though, so you're not too disappointed at its board presence.

You untap, draw a card, and aren't too enthused at the fact that Crown of Vigor isn't a creature. It isn't another basic land, at least, and you suppose you should be a little grateful for that.

You glance at Riku, who's probably going over potential combat scenarios in his head. You're at a precarious spot right now, and even if you manage to hold off your opponent's forces for another turn, there's still the possibility that Riku could simply draw some direct damage and blow you away. But what kind of move could you possibly make here?

It is the start of your first main phase. Defeat Riku before the beginning of his next combat phase. 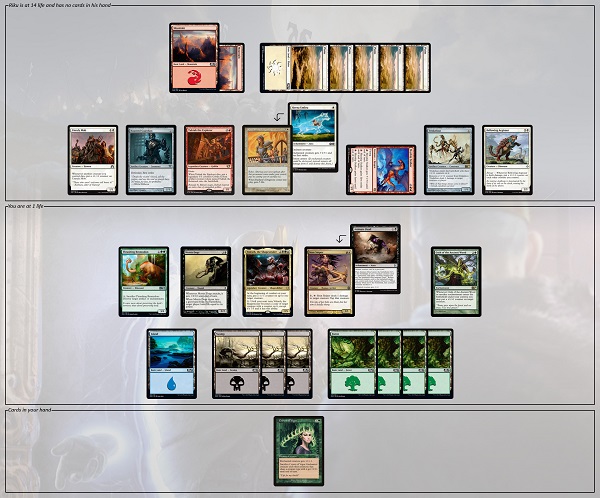 Riku is at 14 life and has no cards in his hand. He has the following cards in play:

If you think you've got a great solution in mind, don't put it in the comments! Instead, send it to puzzles@gatheringmagic.com with the subject line "Puzzle - You Leave Me No Choice" by 11:59 P.M. EST on Monday, August 26, 2019. We'll include the best ones in next week's article along with the next puzzle!

Your opponent's Watcher in the Web is the major problem here, because it can stand in front of a huge number of blockers and survive thanks to its indestructibility. You do have a removal spell in hand... but what you don't have is enough cards to fuel it.

"This one is fun because it requires us to generate some obscene card advantage with Garna," Kirk Maijala writes, "but then win instantly instead of trying to grind out a win against Angie. Our path to victory requires us to take out that annoying spider with a big Scent of Nightshade, which in turn requires us to fill our hand with as many black creatures as possible. Thankfully our Thunderscape Familiar puts in a lot of work, saving us three mana throughout this line."

"This puzzle should've been called 'Shenanigans with Garna'," Sean Patrick Keatley notes. "Garna enables returning everything put into your graveyard from anywhere, including itself if you can sac it with the ability on the stack. So...

This solution leaves you with two extra lands, because you end up not using Bone Harvest. There's a variant that uses Bone Harvest, though: You first cast it to put Lingering Phantom and Hidden Horror on top of your library. From there, your first activation of Anje Falkenrath draws you the Phantom, and because you're then untapping Anje, you can follow up by discarding the Phantom to draw the Horror.

This, however, leads to an alternative solution where you don't cast Grave Scrabbler for its madness cost. Instead, Kirk Maijala's solution uses Bone Harvest as your method of retrieving Garna:

This alternative solution has its own variant: You can cast Grave Scrabbler for its madness cost, in which case you return Lingering Phantom to your hand slightly earlier than expected.