Login
0 Item
Advanced Search
Sign In
Create Account
André drops his Orzhov Cluestone into his graveyard and draws a card. "We don't have to keep playing," he eventually says, after a moments' thought.

"I'm serious," André says. "They're about to call time on us, and I'm at seventeen life against your nine. You're going to need more than a few turns to beat me."

"For starters, I've got a Voice of Reason," André says, turning it sideways. "I'll attack with it now, and it gets my Exalted trigger to become a 4/6. I'm assuming that that preview card of yours can't do anything about it."

"My Master of Winds is Blue, so I can't block with it at all. Not that I'd want to, though."

André nods. You mark down Mari's updated life total, ticking her down to five.

"Beyond that," André says, "you're not going to be able to deal more than a tiny bit of damage to me each turn. I've even got that Cast into Darkness on your Flamewake Phoenix, so it's hitting me for a grand total of zero damage."

"You know," Mari says calmly, "we could go a lot faster if you could just get to the point."

André pauses for a while, and then laughs. It's an ugly sound, even if his face mask is muting it.

"Suit yourself," André says, tapping the last of his lands and dropping an Evra, Halcyon Witness onto the table. You shake your head; the last thing your friend needs right now is more lifelink creatures on the other side of the board.

Mari looks irritated. Despite the fact that the Unabridged Cube has given her a Master of Winds today in anticipation of the upcoming Zendikar Rising set, she hasn't been doing too well with it. Her patience hasn't been helped by her opponent's smarmy attempts at 'resolving' the game, either.

"No," Mari says simply. "I've been around long enough to expect anything from a Cube that has one of each card ever printed."

André graciously yields the table, and Mari immediately starts her turn. She untaps her permanents, draws a Raking Claws from her library, and then leans back to think.

"I'm starting to think he's right," you whisper from the seat beside her.

"What makes you say that?"

"Well, he's got a ton of blockers and some good lifegain. Even if he doesn't take you down with that Voice of Reason, I don't think you'll be able to outrace his life total. At least, not when we know that the judges are about to call you both for your final five turns."

"That's what you think," Mari whispers back.

"Not in the slightest," she says. "I've got him right where I want him."

It is the start of your first main phase. Defeat André before the beginning of his next combat phase. 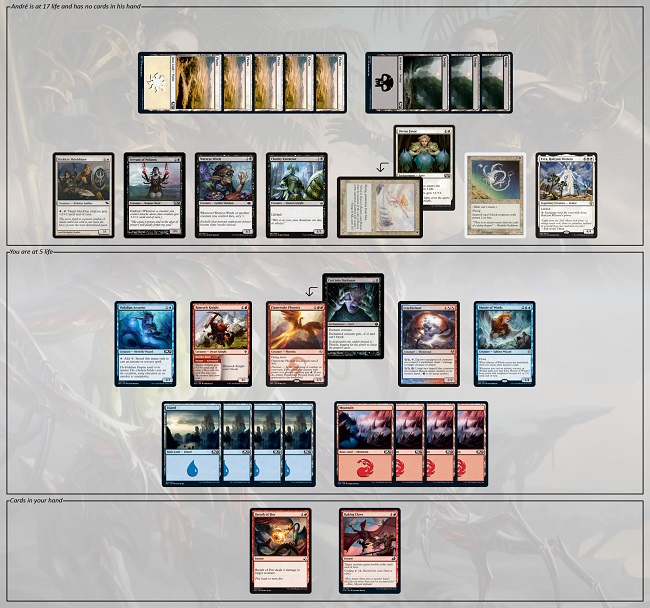 André is at 17 life and has no cards in his hand. He has the following cards in play:

Instead, if you think you've got a great solution, you can send your solution to puzzles@gatheringmagic.com with the subject line "Puzzle - Storm of the Century" by 11:59 P.M. EST on Monday, September 21, 2020. We'll include the best ones in next week's article along with the next puzzle!

Llanowar Scout's ability comes up short for you here, because it doesn't overcome Game Trail's conditions: You can use the Scout to put Game Trail into play, but the Trail will still force you to reveal a Mountain or Forest card as it hits the battlefield. Ah well.

This means that you need to get Weathered Wayfarer to work, which means getting yourself down to less lands than your opponent. "Luckily," Max adds, "there are just enough lands lying around and a creature with a very specific set of skills to make this all work!"

The only other question you need to answer is just how you can get past Miranda's blockers (including a host of Angel tokens). Funnily enough, this one isn't too difficult: "The preponderance of blockers on Miranda's side of the table is basically irrelevant," David Arnold clarifies, "on account of Vigorspore Wurm's as-yet un-keyworded evasion ability, known from such greats as Vorrac Battlehorns and Familiar Ground:

Several people also pointed out that this solution has one interesting variant: You can use the Aerie Ouphes' ability entirely before combat and still be able to win:

This leaves you in a position where all possible blockers from Vigorspore Wurm have a remaining toughness that's less than or equal to their power... which means that Boros Fury-Shield can take care of the rest. "It turns out there weren't too many angels after all," Greg Dreher muses.