"Girl, there's nothing bigger than 4 toughness on the other side of that table," Cris says, "and that Kami of the Tended Garden is a liability. I think you'd better throw it in."

You sigh. You're obviously dealing with Meredith as your opponent in this match, but given the opinion-spouting rubberneckers at her side, you're starting to wonder if she's all there. You ought to call a judge on this, but Boris is unfortunately off taking a bathroom break.

"I don't think I should. What do you think, Derek?"

Derek doesn't look up from his phone. "I absolutely think you should," he says.

"I don't know," Meredith says. "What if it ends up being relevant?"

"Oh honey, it's just a 4/4 creature with an upkeep cost," Cris says. "And you really need to move on this board, or otherwise you're just going to keep playing cards until they spill off the edge of the table."

To tell the truth, she's not too far off the mark: Despite having gone through over half your decks, you and Meredith are still sitting at double-digit life totals. This would normally put you at a disadvantage, seeing as you're the one who has fewer creatures. But between your average creature size and Meredith's indecision, you've managed to hold the line.

"Okay," Meredith says, putting both hands on the table, "I'm making a decision."

"I'm not going to attack, and I'm just going to cast this thing."

That 'thing', of course, turns out to be a 9/9 Kalonian Behemoth - something that you wouldn't be able to target even if you had the removal for it. For the first time in a long time, you curse your luck with the Unabridged Cube: You know perfectly well that it has one of each card ever printed, but you'd be absolutely shamed if you lost a match to these opponents because of that.

"That's respectable," Derek says, stealing a glance at the Behemoth.

You turn to your opponent. Something tells you that Meredith most certainly can't handle it, but you keep that thought to yourself.

"So, you're not attacking, and you're almost tapped out... does that mean it's my turn?" you ask.

You shake your head and start moving to untap your permanents, all while Meredith's friends chatter in the background. At least their attention's diverted, so you can take your draw in relative peace.

Unfortunately, the card on top of your deck is less than optimal: It's a Profane Transfusion, and although you definitely have enough mana to cast it, you're not exactly in a position where it's going to make a lot of impact on the board.

"Bet you it's something good," Cris whispers.

"Whatever it is," Derek says, dismissively.

You survey the cards on your side of the table. Boris doesn't seem to be coming back anytime soon, so you might be on your own here. Rather than deal with what amounts to three opponents in this match, you start wondering how to save a life and get away from this insanity.

It is the start of your first main phase. Defeat Meredith before the beginning of her next combat phase. 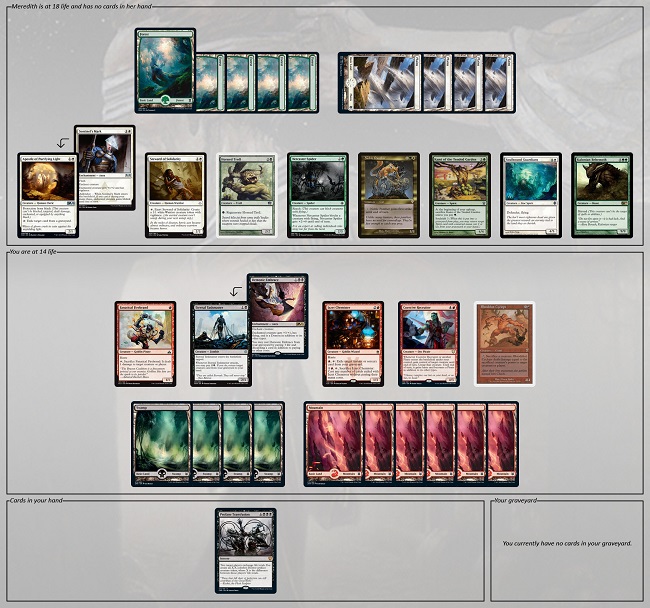 You are at 14 life, with the following cards in play:

You currently have no cards in your graveyard, courtesy of Meredith's Apostle of Purifying Light.

Meredith is at 18 life and has no cards in her hand. She has the following cards in play:

Instead, if you think you've got a great solution, you can send your solution to puzzles@gatheringmagic.com with the subject line "Puzzle - Back Alley Surgery" by 11:59 P.M. EST on Monday, December 7, 2020. We'll include the best ones in next week's article along with the next puzzle!

"The key to this puzzle is the alternate victory condition offered by Atemsis, All-Seeing," Jacob Butcher writes, "enabled by the power-up and trample provided by Goreclaw, Terror of Qal Sisma as copied by Stunt Double. The rest is 'just' carefully moving cards between battlefield, graveyard, library, and hand."

In fact, because you're moving so many things between zones, this puzzle concentrates on what you should move, and when. The ability to draw unknown cards from your library gives you a little flexibility, but unfortunately those unknown cards won't count for their mana costs.

Hyman Rosen's solution, however, points out that you can work with what you do know:

In our main phase:

In our combat phase:

To be fair, you don't even have to return Stunt Double to your hand: One variant of this solution involves putting only one creature from your graveyard on top of your library during Argus' turn. You can then activate Atemsis to draw that card and an unknown card from your library, discard the unknown card, and keep Tendrils of Corruption to act as your 4-mana win condition. This gives you some uncertainty (what if the mystery card is an Emrakul, the Aeons Torn?), but otherwise works.

Michael Feldman, however, submits an alternative solution that doesn't involve activating Eidolon of Philosophy. Instead, this solution relies on Bontu's enters-the-battlefield ability: