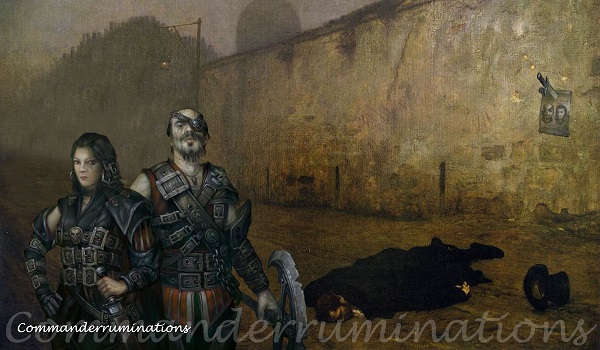 The Death of Marshal Ney by Jean-Leon Gerome (1868). Wanted Scoundrels by Volkan Baga

When I took my second look at the Universes Within partner commanders, each of which is an in-lore Magic version of the Stranger Things Secret Lair legendary creatures, I was searching for something to latch onto and build around. I was less concerned with flavor and more concerned with mechanical synergy between two partner commanders. Last week I wrote about Cecily, Haunted Mage and Othelm, Sigardian Outcast (Eleven and Will) and while it was a fun challenge, I didn't feel like they worked together in a mechanical way.

In today's column I don't expect I'll have the same problem because both of my choices care about one simple thing: getting a clue. I should probably rephrase that as "getting Clue tokens" because Wernog, Rider's Chaplain and Sophina, Spearsage Deserter are both reasonably good Clue token generators.

Wernog will probably hit the battlefield first. At 2 mana he's easy to cast and when he enters or leaves each opponent may investigate. They can either get a clue or lose one life, and you get as many Clue tokens as your opponents got plus one for good measure. Sophina will let me investigate once for each nontoken attacking creature when I attack, provided I send Sophina into the fray as well.

The synergy is clear - they both care about Clue tokens, but they also work in very different ways. Loading up on flicker effects might work with Wernog, but I'd want to go wide if I was going to make the most of Sophina's attack trigger. Whatever I do is going to have a focus on artifacts, but that in itself just raises more questions.

I think this build is going to wind up being a relatively fair deck, with a few tricks up its sleeves. My first thought is that making Clue tokens means making artifact tokens. Those can be turned into other kinds of value, up to and including just outright winning the game.

Academy Manufactor will see me make those Clue tokens and serve up a Food and a Treasure token for me to use. Dockside Chef can let me turn any of those tokens into card draw, though Clue tokens can already give me draw - that's just what they do. If I'm able to get enough of those artifacts on the battlefield, a Hellkite Tyrant can turn that into a win. Don't be fooled - it isn't easy to win via Hellkite Tyrant, but it's fun to try and if nothing else your opponents will have to find an answer if you're at or over that magic number of 20 artifacts. With most decks the challenge is to hit 20 artifacts, but with this partner pairing that part might be easier than usual.

I appreciate that you might not want to throw your Dockside Extortionist into anything but your most high-powered deck, but it fits in nicely in this list. Dockside will give you treasures equal to the number of artifacts on your opponents' battlefields. Smothering Tithe is almost as much of a staple in White as Dockside is a staple in Red and will give you a Treasure token when an opponent draws a card unless they pay 2 mana. Not to be outdone, Revel in Riches completes this Treasure trifecta, giving me a Treasure when a creature an opponent controls dies. If that doesn't sound that impressive, it can also win me the game if I get to my upkeep and have 10 or more Treasures on the battlefield.

These "you win the game" cards aren't actually this deck's main wincon. I love having a few escape hatches lying around but I don't generally expect to hit them very often. If I win a game off of Hellkite Tyrant or Revel in Riches I'll be amazed and delighted, but my main plan is a lot simpler.

I might be tempted to use those Clue, Treasure or even Food tokens, but if I can let them pile up they can make some of my creatures much scarier. Digsite Engineer might be one of my favorite white cards from the Lorehold commander precon deck. I've got lots of artifacts in this deck and when I cast an artifact spell I can pay 2 and make a 0/0 colorless Construct that gets +1/+1 for each artifact that I control.

Those Construct creature tokens don't have any evasion or even any keywords, but Bronze Guardian sure does. This Golem has double strike and has a power equal to the number of artifacts I control. Hellkite Igniter is a Dragon with flying and haste and can get +X/+0 for two mana, where X is the number of artifacts I control. Hellkite Igniter costs 7 mana, so there's a reasonable chance I'll be able to pay that cost three or four times on the turn after it hits the field. With even a meager pile of trinkets that could turn into a mess of damage for whoever I swing it at.

This deck runs a handful of low mana flying artifact creatures like Pilgrim's Eye and Skyscanner, along with creatures that provide card draw, recursion and other key functions. This isn't a deck that leans too heavily into creatures, but I want to have a good chance to be able to swing at someone in the late game and have one of my creatures get past blockers. My hope is that I'll have a nice little pile of artifacts and I'll be able to make the most of one of my favorite pieces of equipment ever: Cranial Plating.

This equipment gives +1/+0 for each artifact I control, but the reason it's so amazing is that I can pay 2 Black mana and equip it to a creature at instant speed. With 10 artifacts on the field, it could equip to Bronze Guardian and let me swing for 20 power with double-strike. Unblocked that kills a player still at their starting life total, and even if I'm just swapping it onto a Sanctum Gargoyle, it can make for a good chunk of damage.

This deck is loaded up with mana rocks and staples, and I've got a healthy dose of removal alongside a few wraths. I would be comfortable playing this at casual and mid-powered tables, but I don't know that it has the kind of powerful and dependable strategy you need when playing at high powered tables. Decks occasionally punch above their weight, but I wouldn't be expecting to win much more than my fair share with this deck. That's not a bad thing - I think with a variety of possible wincons and the fun of using Cranial Plating as a combat trick, this would still be a really fun deck to play.

You could tune this up by adding in fast mana and pivoting to a few more robust wincons. You might throw in Tainted Strike, as you'll probably have plenty of chances to hit for 10 or more damage. A strategy built around Clue tokens isn't likely to creep up towards fringe cEDH power levels, so I think it's more likely readers might want to tune this list down for more casual play. You'd do that by dropping the tutors and expensive cards like Dockside Extortionist, run a couple more lands, add some flicker spells and maybe tone down the land base a bit. It would still be a fun deck, but I love the idea that you're in White and can use an all-star like Stoneforge Mystic to get your Cranial Plating.

I should admit that this list came together from having played my Asmoranomardicadaistinaculdacar deck a while back and seeing how much fun it is to move Cranial Plating around at instant speed. I took a few ideas from that, a few things I've picked up from years of deckbuilding and some sweet picks from the 2021 Lorehold precon deck. I knew there were great artifact-centric cards in that precon and while I never even played the deck or did anything with the commanders, some of the tools from that precon will definitely put in work in this list. I love the idea of having someone remove Cranial Plating and then using Osgir, the Reconstructor to create two token Cranial Platings.

I should note that "you win" cards like Hellkite Tyrant and Revel in Riches are an acquired taste.

I've won games with weird cards like those and it can be a fun surprise. I've also built decks around "you win" cards and found myself frustrated that it felt like the deck was never able to nail down that particular wincon even if it did win some games. They're in there because they can be fun and they can draw removal, but don't fool yourself into thinking the deck will be hitting those all the time even with the tutors I put into this list.

If there are things I should have been doing with my piles of artifacts that I missed, please leave a comment. I haven't built a lot of Mardu artifacts lists, and I'm sure there are cards I left out that could make a real difference. We all have our deckbuilding habits - both good and bad - and I always love to hear how you might approach a build.