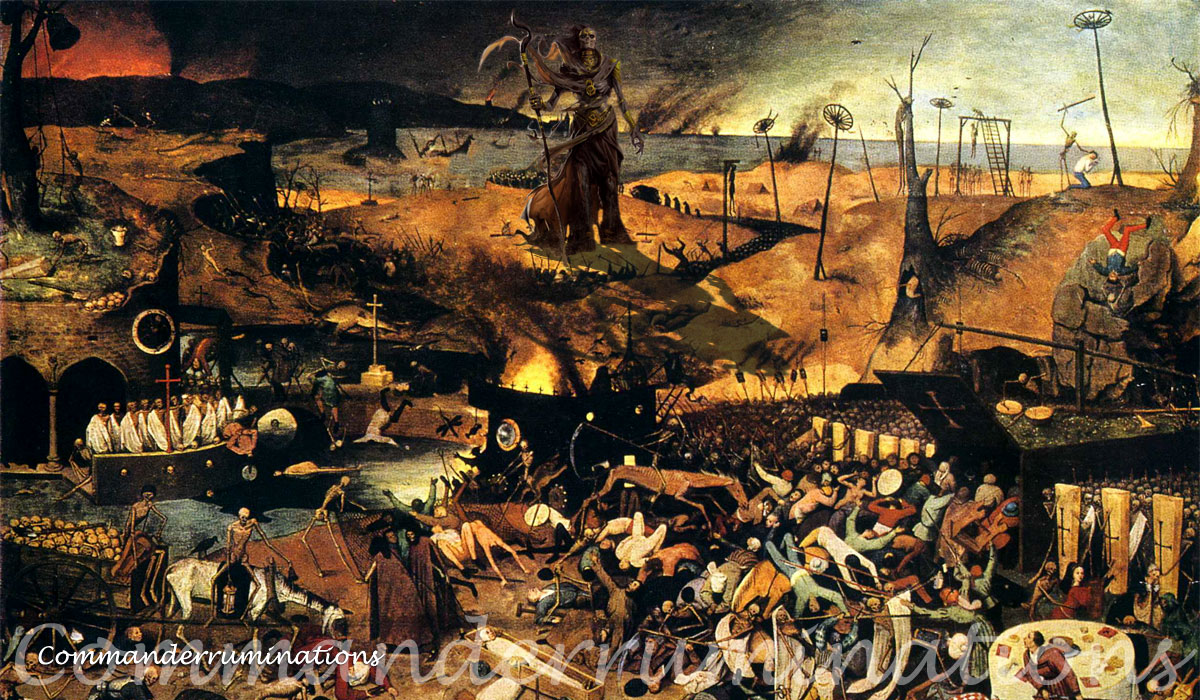 The Triumph of Death by Pieter Bruegel the Elder (1562).

Lord of the Accursed by Grzegorz Rutkowski.

I am starting to find it somewhat astonishing what Wizards of the Coast unleashed on us last Fall. Not every new partner or new legendary creature was destined to be a world beater, but the sheer quantity of exciting new options we now have to run out of our command zone was an infusion of variety that is going to be inspiring interesting new decks for years to come.

I've been planning to pivot over to covering Strixhaven for a few weeks, but every time I check the dwindling list of legendary creatures from last Fall's Commander Legends, I've been able to find something interesting to build around.

When I saw that Sakashima of a Thousand Faces had not yet been covered, I was tempted to pair it with Numa, Joraga Chieftain so that I could write a deck called Numa Numa. Sakashima is an amazing card, and deserves better than that, so I kept looking and before long I had found my pairing.

Elves are a great tribe, but Numa, Joraga Chieftain hadn't been more than a blip on my radar. Numa might do some work in a Marwyn, the Nurturer deck as she wants to have +1/+1 counters on her. The cost of paying XX to distribute X counters among any number of target Elves is reasonable, but in the age of pushed cards and broken synergy it feels a bit lacking. That probably means that it's fairly costed.

Looking through the handful of remaining mono-colored partners still up for grabs I started looking for cards that had a way of working together. It didn't take long. Alharu, Solemn Ritualist is a Human Monk who puts a +1/+1 counter on each of up to two other target creatures when it enters the battlefield. That's nice, but the big deal with Alharu is that I'll get to create a 1/1 white Spirit creature token with flying when a nontoken creature with a +1/+1 counter on it dies.

Between these two cards I've got a way to push +1/+1 counters onto Elves and a way to turn a boardwipe into a flying army of Spirit creature tokens. These commanders put me in Green and White, so I've got access to plenty of cards that care about tokens, care about +1/+1 counters and care about wiping the board. I can focus heavily on elves, add in a dose of support for the kinds of things these two care about, load up on boardwipes and hope for the best.

This deck has a relatively simple plan. Flood the board with elves, Make sure they've got +1/+1 counters on them. If my army gets out of control that's good for me. If there's a boardwipe and I get an army of flying spirits to replace my army of elves, that's good too.

I'm running lots of cheap elf mana dorks. A few of the elves in this deck also care about +1/+1 counters.

If I'm lucky, I'll draw into one of my support cards. Loyal Guardian isn't an Elf, but it will put a +1/+1 counter on all of my creatures when I go to combat if I control my commander. Cathars' Crusade will put +1/+1 counters on my creatures when another creature enters the battlefield. Vorinclex, Monstrous Raider backs up Hardened Scales to help make the most of the +1/+1 counters I am able to put on my creatures. The fact that it shuts down my opponents from certain counter-based strategies is icing on the cake for this bad boy.

My goal isn't to have all my elves get killed off, but there could definitely be times when I'll want to make spirits.

With the right combination of token doublers on the field, I might be happy to see a few of them die. With just two of the enchantments shown above, I could see three elves die and end up with twelve 1/1 flying spirits.

Any deck I build that goes wide and is in Green is going to run Beastmaster Ascension. It's just too good at what it does not to put it in this list. Odric, Lunarch Marshal might not pump my team, but if I've got even a single 1/1 flying spirit, Odric will give my entire team flying. Majestic Myriarch will be twice as big as my army is wide, and if I've got even a single flyer, it will gain flying at the beginning of each combat. This isn't a high-powered deck, so having a way to translate a big army into a single big creature makes sense.

This list ended up leaning heavily toward elves but having an assortment of other support creatures. I'm running Requiem Angel as another way to turn my creature deaths into even more 1/1 flying Spirit tokens. Those spirits might end up being Angels if I'm able to get Divine Visitation onto the battlefield. Having the flying wing of my army start out as 4/4 Angels is a great way to turn tokens that are frankly underwhelming in our format into a real problem for my opponents if I can churn out even a handful of them.

I didn't unlock any major surprises with this build, but not all builds take you into uncharted territory. This list reminds me of my Thalisse, Reverent Medium deck and I have to wonder if there's a place in that list for Alharu, Solem Ritualist. It seems like it would be a really good fit, as Numa, Joraga Chieftain would be in a variety of Elf decks. This might be a case where both of these legendary creatures are best in the 99 (or 98) of another deck, but it was fun to explore what kind of trouble they might get up to when paired together.

I'm definitely running more than usual in the way of boardwipes, as this deck will definitely have moments where I'll be happy to wipe the board. It will have a lot to do with what I've been able to play out and what I'm up against.

I came close to including a Selesnya lifegain / counters combo that uses Archangel of Thune and Spike Feeder in today's list. I do think combo has a huge place in our format, but neither Archangel nor Spike Feeder has anything to do with Elves. If you wanted to push today's list up into a higher power level, I'd probably suggest adding a combo like that or even some Elf-driven Staff of Domination nonsense. I think this deck sits pretty nicely at a medium power level. It's got the ability to deal with threats and present a threat. With the right combination of permanents, you could run away with a game.

I do believe that Alharu's five CMC is something of a challenge, mostly because this deck's game plan will sometimes hinge around boardwipes. This list will have games where you aren't able to turn your Elves into a legitimate threat, or even turn your Elves into enough Spirits to be a legitimate threat. I definitely think this could be a fun deck to play in casual metas where you're not constantly worrying about super strong commanders or combo wins coming out of nowhere. I love a good combo but I also love a good, old-fashioned game where you're going to win or lose on the battlefield.

If you've built around either of these partners or if I missed some obvious synergy or cards that should have been included, please comment below. I'd love to hear your tips or your thoughts on my assessment of this particular pairing.

That's all I've got for you today. Thanks for reading and I'll see you back here next Monday!