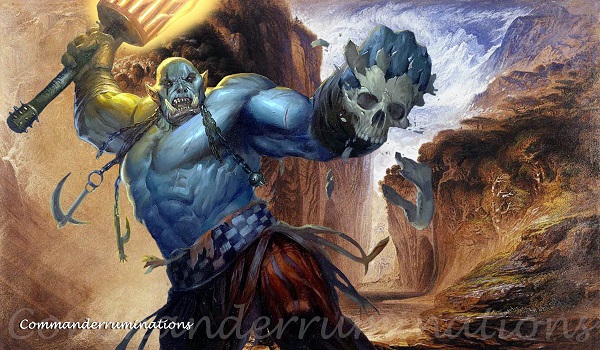 Manfred and the Alpine Witch by John Martin (1837). Rakdos Roustabout by Lucas Graciano.

For some reason I didn't wind up buying a box of War of the Spark. I always tell myself it's smarter to buy singles if you don't play Standard and when I buy a whole box I wind up feeling like I've got way too many cards lying around that I'm never going to use. That doesn't mean that I don't like to open up booster packs. I do love that moment of excitement when you crack open a fresh pack and sort through your newly unwrapped little pile of trash to look for those elusive treasures.

I once built a deck around a foil Show and Tell I pulled out of a booster and I have a foil Prossh, Skyraider of Kher waiting for me to get around to building Food Chain Prossh. I'm waiting for a good excuse or a month where our EDH League's theme lines up right so that the deck is on theme. I'll occasionally get so excited about a new card that I'll order it or trade for it, but I often just plan to build my next deck around cards I happen to open in booster packs. I sometimes just like to see what the universe will hand me for my next project.

When I opened up a pack with Storrev, Devkarin Lich as the rare, I wasn't initially that excited.

and comes ready for battle. She's a 5/4 with trample. Her "party trick" is that when she does combat damage to a player or planeswalker you get to return to your hand target creature or planeswalker card in your graveyard.

I don't generally like to write about creatures that are just milquetoast versions of better commanders and at first glance I had to ask myself why I wouldn't just build a deck around Meren of Clan Nel Toth. Meren is fantastic at abusing graveyard recursion and I've been stomped more than a few times by Meren decks.

Storrev isn't Meren. She cares about dealing combat damage but more importantly Storrev cares about planeswalkers. She cares about damaging your opponents' planeswalkers and she allows you to bring planeswalkers back out of the graveyard. Storrev doesn't put them onto the battlefield, but she still represents a slightly different angle on graveyard recursion. The qualifier that the creature you pull out of the graveyard can't have been put there during this combat seems a little odd. It simply means that if one of your creatures dies to instant-speed removal or first strike damage, you can't target it with Storrev if she deals regular combat damage.

When I think about Vraska I think about making assassin tokens that can kill a player if it does combat damage to them. Vraska's assassins make me think of board wipes.

You can and should run targeted removal as well, but board wipes are uniquely powerful with planeswalkers. If Vraska is about to make her adorable little you-lose-the-game tokens you can wipe the board to clear the path so they can get through do their job.

You can't always wipe the boards so you also want to run ways to make creatures unblockable so they can get through a line of blockers.

You'll want to have ways to make Storrev unblockable so she can get damage through against a player when trample damage won't be enough. Getting attackers through and having a built-in way to return cards from your graveyard to your hand both get me thinking about another really interesting threat.

Phage may not be a planeswalker, but Storrev can still help you get her back to your hand. If an opponent casts Living Death or finds some other way to put her back onto your battlefield you're going to lose the game, but she's just too interesting a card to pass up.

Memorable losses are part of the fabric of each of our Commander experiences and the complex and colorful tapestry we're each weaving through all the games we play. That tapestry wouldn't be the same without the occasional heartbreaking loss or train wreck of a game. Phage is worth the risk. If playing her backfires too often we can always switch Phage out for something a little safer.

The next thing we want to do is make we have a little extra recursion over and above Storrev just hitting an opponent once per turn.

If we can give Storrev double-strike we'll get two recursion triggers because she triggers on combat damage. That is fantastic, but we're not in White or Red so our options are Limited. Fireshrieker will do. We'll also get recursion from Eternal Witness, which Storrev can get back for us if it goes to the graveyard. A more serious threat and a problem for our opponents will come in the form of Sheoldred, Whispering One. Getting a creature back on each of our upkeeps is good and forcing our opponents to sacrifice creatures is even better, but Sheoldred comes with the risk of forcing the table to pull out all the stops to deal with her. Sometimes you'll be digging your own grave by playing her.

We're going to want to run some good recursion targets to try to get as much value as possible out of Storrev's party trick.

Sakura-Tribe Elder and Burnished Hart will help get us lands and will be great targets for Storrev if the game goes long. Spore Frog will help keep us safe. Running a bunch of force-sacrifice dorks like Fleshbag Marauder and Merciless Executioner will help us make sure that our opponents don't have too many blockers to get in our way. Being able to recur them every turn could easily turn into a really oppressive situation if we're able to keep Storrev on the field and swinging.

If our plan revolves around recursion with a focus on planeswalkers we should build a decent amount of planeswalker support cards into this deck. I'm not including Doubling season or Pir, Imaginative Rascal though if you have an extra one of either of these cards lying around I can see including them. I'm choosing to focus instead on cards with the proliferate keyword.

Evolution Sage is already being recognized as a powerhouse in any deck that wants to mess with counters. To make the most out of landfall proliferate triggers I'm running Boundless Realms and Scapeshift along with familiar Green ramp staples: Rampant Growth, Cultivate, and Kodama's Reach.

Contagion Engine and it's little buddy, Contagion Clasp give us more options to proliferate counters. Plaguemaw Beast will help out too, but we'll want more than just Vraska for these proliferate cards to really work in this deck.

If we were going to include other planeswalkers we'll be stuck with a fairly limited pool of cards since we're just in Black and Green.

A lot of the Green and Black planeswalkers aren't great fits for this deck. Liliana often cares about zombies and this isn't a zombie deck, though it certainly could be if built differently. Nissa cares about lands and this isn't really a land-focused deck, nor does it care about Elves or Elementals. The planeswalkers included above are in this list for a variety of reasons. Some provide removal. Some have pretty nasty "limit break" loyalty abilities. All are in the mix because we're trying to get value out of Storrev's ability to bring planeswalkers back out of the graveyard and to do that we have to run more than just three Vraskas.

Ranging from Blackcleave Goblin to Whispering Specter, we'll have a baker's dozen of these nasty little threats. Core Prowler brings a proliferate trigger to the party when he hits the graveyard. Corpse Cur will bring a creature card with infect back from the graveyard to your hand. Ichor Rats will give everyone a poison counter when it enters the battlefield, so we'll need to be careful if we're playing with an Atraxa player.

We'll run Skithiryx, the Blight Dragon alongside Crux of Fate for that rare game where we can use the latter to clear out everything but "Skittles". We'll be happy to see the board cleared when we have a Blackcleave Goblin or Putrefax in hand because more often than not we'll be able to swing in with an infect creature with haste at someone who wasn't able to get a blocker up immediately.

If we can get a few counters on everyone and in the mid-to-late game use Boundless Realms or Scapeshift with Evolution Sage on the field to get a half dozen or more proliferate triggers, it should kill the table and it will feel pretty darn good - for us at least.

As with many of my decks, this is a first draft. I've noticed that I tend to lean on infect a lot. I think that's a direct result of playing against players who make me feel like if I want any chance to win the game I have to really lean toward powerful strategies. I'm not sure infect is actually that powerful a strategy in a multiplayer format like Commander. A lot of the time you can kill one player and then you get hated off the table, but my hope is that this deck might seem a little less scary than a deck running Skithiryx as its commander or one that's trying to drop an early Blightsteel Colossus.

While this isn't an incredibly expensive deck, I actually cut out a few higher-priced lands and tutors to try to keep the price somewhat reasonable.

I wasn't super excited to plan out a deck around Storrev but I think I've managed to come up with a serviceable list that should be able to win its share of games. I can see an argument that in Green I should assume you'll be able to get enough mana to cast Blightsteel Colossus but my deck-building habits have been trending towards lower cost cards in recent years.

I think my logical flow of Storrev into planeswalkers into proliferate into infect makes sense, but I'd love to hear what you would do with her if you were going to build around Storrev. I know this deck won't stand up to truly competitive lists but do you think infect is too nasty to play in casual games? Is it "weak-sauce" to lean on only having to count to 10 when everyone else is winning the hard way?

I have a bad habit of leaning on older cards rather than looking to the more recent sets. Did I miss any cards that are recent or even in War of the Spark that absolutely should be in this list?

That's all I've got for today. Thanks for reading and I'll see you next week.