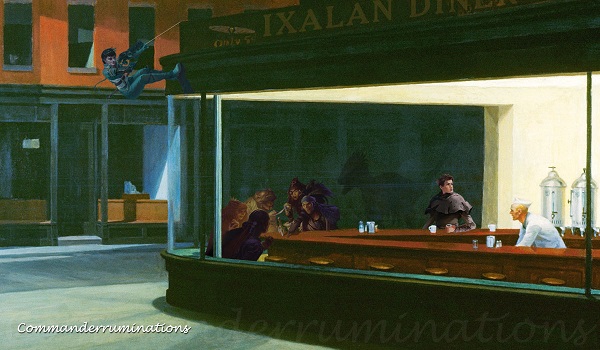 Two months ago I wrote a column called Commander in the time of COVID-19. The decklist in that column may be forgettable, especially with the advent of a far, far superior infect commander in Brokkos, Apex of Forever, but the biggest takeaway was that our world was about to change a lot. While it was clear that I had some grasp on the seriousness of the Coronavirus pandemic, it seems amazing in retrospect that I made no mention of wearing masks. Maybe there are parts of the world where folks aren't regularly wearing face masks, but in my neck of the woods it's become the norm and I expect that to continue for quite some time.

This week an interesting column came through my feed. It's an article from Slate.com by Christina Cauterucci and it's worth a read. Her use of the term "quarantine pod" as a way to describe the small group of friends she has been interacting with socially made me think of commander pods. That in turn made me think of how much I miss playing games at the LGS and to some extent, hosting games in my home.

In the best of times many of us juggled our friends and social activities as well as we could so that we were neither overwhelmed nor starved for human interaction. It's become painfully clear that 2020 is not "the best of times." Many of us are successfully engaging in social isolation, wearing masks and even gloves when we go out and only engaging with other people when we absolutely need to.

To minimize the impact of a second wave of this pandemic this coming Fall, we will probably need to be very careful about how we start to reopen society and that may mean wearing masks and socially isolating much longer than any of us want to. If you're among the many who have not been playing Commander online and have also been minimizing the number of people you interact with, you might not like the idea of things not getting back to normal for a long time.

The toll this kind of social isolation can take on a person is quite serious. Humans are social creatures and even the most introverted gamer might feel the weight of months of not getting to play Commander at their local game store. You may be playing online and you may be getting as much "people time" as you ever wanted, but chances are just as good that you're either starved for gaming or simply starved for in-person interaction with your friends from your LGS.

My takeaway from Cauterucci's article was that Commander players should be setting up their own quarantine pods. These would be small groups of a select few players from your LGS that you enjoy playing with. We might not see a second wave of shutdowns and social isolation, but if past is precedent it would be wise to plan for that to happen. Chances are, your buddies miss you as much as you miss them.

What all this means is simple.

Find some friends you love playing Commander with and have them over to play on some sort of a schedule.

Of course, in the time of COVID-19 nothing is simple.

Make sure these friends are on the same page as you are regarding how much social isolation and virus-prevention is needed and do your best to make sure you all adhere to the protocols you set up.

Your agreement will vary based upon your age, where you live, what your healthcare situation is, and how vulnerable you are because of your work, living and commuting needs. If you're going to invite people into your home, you should have a conversation about how they are dealing with living through this pandemic. My situation isn't the same as anyone else's so what might work for me might not be appropriate for you.

Make sure these friends know what your house rules are, and that they follow them. That might mean not sharing a meal and having everyone bring their own snacks and drinks. It might mean using hand sanitizer before they come into your home and wearing a mask while they're visiting.

You could house-rule that nobody is allowed to touch anyone else's dice or cards and that Mind Control and Act of Treason effects don't work. It's a different world we're now living in, and we may need to change how we play to adapt to its challenges and dangers.

The risks of setting up a "quarantine pod" is not just about you and your friends. You need to make sure you're not putting your housemates or your family at significantly greater risk by having a regular Commander night. Anyone living with you who isn't involved in your Commander games should be involved in your planning process and should have the opportunity to give input into how you go about making this happen.

Only you can answer the question of whether your mental health needs and the benefits of playing Commander regularly with friends will outweigh the risks you'll incur by continuing to self-isolate without a regular gaming outlet. They are real risks. People are dying.

The joy you can get from an evening of EDH is also very real, and it is important to be aware of both your health needs and your mental health needs.

You may not have the luxury of juggling quite as many people in your busy schedule as you used to, but I think a lot of us would do well to find a few friends to make sure we see on a regular basis.

If you like the idea of juggling humans, or if you wonder why I'm using such a weird phrase again and again, it's because I'd like to wrap up today's column with a decklist built around juggling Humans.

When I reviewed the legendary creatures in Ikoria, one of the creatures that caught my attention was Kogla, the Titan Ape. Kogla might not exactly "juggle" Humans, but he can bounce them to your hand so you can recast them.

This is going to be a very creature-heavy human-focused deck with a lot of card draw and some fun tricks up its sleeve. It's a casual build, to be sure, but I expect it to be fun to play and probably more resilient than you might expect.

My initial optimism about this deck was based upon the idea that I'd be able to find a pretty decent number of Humans with useful enter-the-battlefield abilities. I don't know what I was thinking because cards like Elvish Visionary does not have functional reprints with the Human creature type. We do have a few human mana dorks, and a few high-quality cards, but nothing like what I was hoping for.

Champion of Lambholt is very strong in a creature heavy deck. Eternal Witness is always great and she is also a Human. I'm committing to the theme pretty heavily, even running cards like Vital Splicer.

I'm probably being a bit too cute, but I've thrown in Runed Stalactite so that I can use Kogla to bounce non-Human ETB all-stars like Elvish Visionary and Acidic Slime. Incremental value is an important part of making a resilient Commander deck, so having ways to bounce non-Humans by giving them all creature types is a good plan. I could see reworking the deck to run Avenger of Zendikar, Craterhoof Behemoth, the inevitable Tooth and Nail, and as a result making this list that much more like every other Green goodstuff Commander deck. I didn't do that, but being able to make a non-Human into a Human, bounce it and recast it does make me think of such things. If that's your jam, jam away.

I always find the most fun in making weird and wonky combos work in Commander games so for me the fun stuff is seeing what kinds of combos we can fit into this list.

With a card like Thousand-Year Elixir or a haste enabler like Concordant Crossroads and enough devotion, we can cast, tap, bounce and re-cast Karametra's Acolyte to make infinite mana. If my math is right, we'll need seven devotion. Kogla, Crossroads and Acolyte give us five green, so we'll just need two other permanents with a green pip and we'll be able to go off. Once we've got infinite mana, we should be able to play, bounce and re-play enough to push for a win.

I've thrown another nasty combo into this list, inspired in part by Kogla's attack trigger. When Kogla attacks you get to destroy target artifact or enchantment.

With Myr Landshaper, you can turn an opponent's land into an artifact and then destroy it when Kogla attacks. That may not be backbreaking, but it's a fun bit of synergy and will come in handy when someone's got a huge hand and a Reliquary Tower, or a big board with a Gaea's Cradle on the field. Sometimes lands just have to get blown up.

If you want to do something truly backbreaking, you can turn a mono-colored opponent's basic land into an artifact land with Myr Landshaper and then use Splinter to exile that land and all cards with the same name from that player's hand, graveyard and library.

If you don't want to lose friends, or just don't have any mono-colored opponents, you can still use Myr Landshaper with Tanglewalker to get a free swing on someone. Just turn an opponent's land into an artifact and your creatures will be unblockable. Myr Landshaper's ability does only last until end of turn.

I suspect a Mono-Green Humans deck will underperform compared to Green Elf decks, so I think it's unlikely Kogla will ever be more than a casual or semi-competitive commander. That doesn't mean it can't be fun if your meta is slow enough to allow you to build up a board and start bouncing your humans and re-casting them.

This might be a worthwhile project if you've got a Renata, Called to the Hunt deck that you're getting tired of. The overlap between Kogla and Renata isn't huge, but there's enough in common between the two decks that transitioning from Renata to our big green Ape might not be that much work.

Forgive me for getting a bit pedantic in the first half of today's column. I've found that you don't truly appreciate how much you need people until they're gone and for a lot of us, this COVID-19 pandemic has had us seeing a lot fewer people than we're used to seeing on a day to day basis.

Please look up and follow CDC (Center for Disease Control) guidelines if you are thinking about forming a "quarantine pod." Balancing your mental health needs while also engaging in social distancing won't be an easy task for everyone, but I believe it's possible to do it right if you're careful.

As for Kogla, the Titan Ape, I'm probably going to buy a box of Ikoria, Lair of Behemoths and if I open a Kogla I'll eventually transition my own Renata deck to Kogla. I like to play my decks a bit before converting them over to another commander and I haven't been playing much lately. Today's column is in no small part inspired by my own struggles with losing my social circle and not knowing when our EDH League will start up again.

I hope you're weathering this storm as well as possible, but if you've been feeling depressed or have been struggling with a lack of social interaction, think about the idea of forming a quarantine pod. It's not without risk, but I firmly believe the benefits outweigh the risks if you're deliberate and careful about how you go about it.