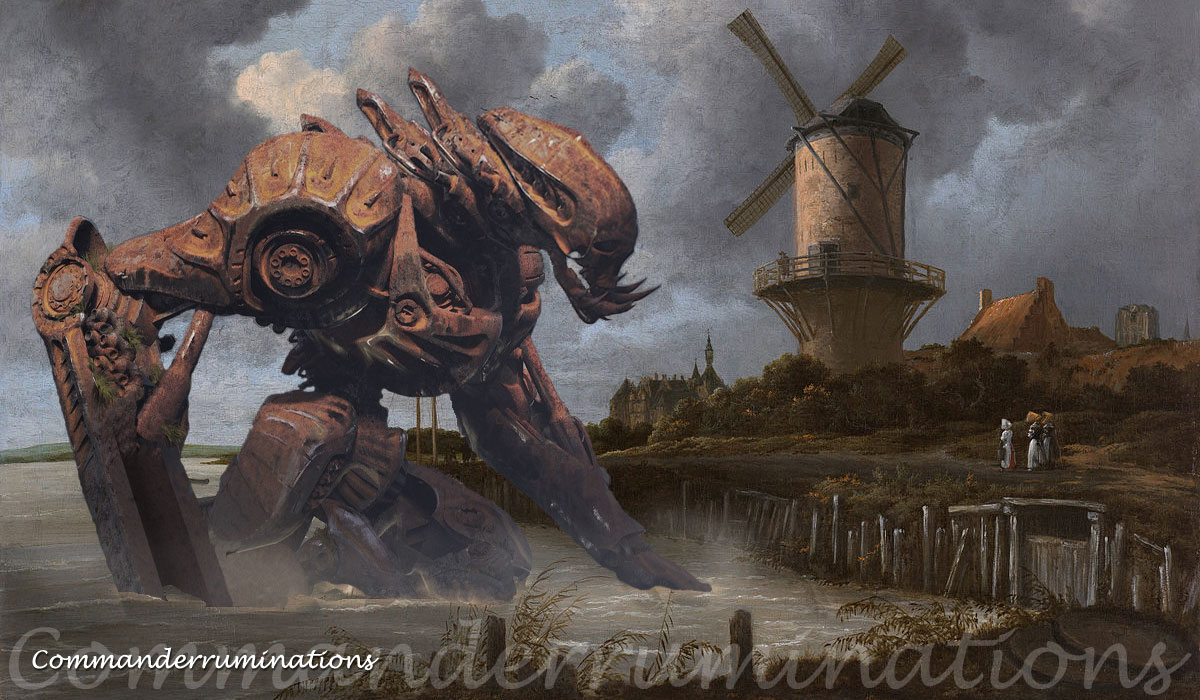 The Windmill at Wijk Bij Duurstede by Jacob Van Ruisdael (1670).

Seal Away by Joseph Meehan.

When researching a new commander, I don't always look up the character's lore. When I do, it's often to confirm which pronouns I should be using. Rarely am I rewarded with something as compelling as this.

"Losheel proudly admits that she's willing to work very hard in order to be as lazy as possible. She turns her brilliant mind to constructing ever-more-efficient mechanical helpers, with the goal of one day being able to do anything else she wants without standing up."

Even if my laziest days don't quite rise to those lofty levels of lethargy, I do appreciate the desire to have one's hard work and cleverness result in having to do a little less hard work down the road. This lovely lady is also of the Loxodon persuasion, and Loxodon are among my favorite tribes in Magic. If I wasn't in after reading that lore, I'm in now.

Losheel, Clockwork Scholar is an Elephant Artificer 2/4 with the ability to suppress all combat damage that would be dealt to attacking artifact creatures I control. That likely means I'll want to attack, and attack with artifact creatures, because why not? They won't take damage and everyone likes being attacked, right? OK - this is not my usual approach, but I think it's good to stretch yourself and play outside of your usual playstyle. As long as I hold back some blockers or give my creatures vigilance, there's no reason not to send my creatures into battle a bit more often with Losheel on the battlefield.

Losheel's second ability is really what got my gears spinning. When one or more artifact creatures enter the battlefield under my control, I draw a card. I can only do this once a turn, but if I build a flicker strategy or get artifact creatures to enter on other players' turns as well as my own, I could actually draw a decent number of cards with this Mono-White deck!

The big question is going to be what I'm trying to draw into and how this deck wants to win. Let's dig into the build a little and see where it takes us.

There are two important things to note about triggering Losheel's card draw ability.

The first is that the creature can be a regular or a token artifact creature token. That means Losheel could assemble an army of artificers. Creatures with Fabricate will create 1/1 Servo artifact creature tokens and those would draw me cards. My only problem with that approach is that there are only four of those creatures in White. Her army would be small, and those creatures don't do that much beyond making Servos. I'm into the idea of building a Servo themed commander deck, painting up a bunch of alters to look like Tom Servo from Mystery Science Theater 3000, and having a grand old time, but I don't think this is that deck.

The second issue is that I am going to want the ability to play artifact creatures or create artifact creature tokens on my opponents' turns so that I can draw as many cards as possible. That's not likely to happen if I'm leaning on just playing artifact creatures with Flash. There are only four of those, so I'm probably going to have to look at ways to either flicker my creatures, create tokens or both.

Unlike some decks that practically build themselves, Losheel isn't giving me an obvious path to follow. That means I'm going to end up playing a mix of different strategies. I'll have a few flicker cards in Cloudshift, Eerie Interlude, Ephemerate, and Restoration Angel. I'll have Vedalken Orrery along with Shimmer Myr and Ancient Stone Idol as ways to flash out Artifact creatures on other players' turns. I've got Angel of Invention along with Master Trinketeer as ways to get Servo tokens and I'm running some Thopter and Construct token generators as well.

To help out my tokens, I've thrown in Phantom General, which would pump them +1/+1, Intangible Virtue, which gives them +1/+1 and vigilance, and the aforementioned Master Trinketeer, which will pump up just my Servos and Thopters.

I'm not all-in on any one strategy, though I am running a ton of artifacts so a Vandalblast will hit me harder than anyone else at the table. The next step is to look at what kind of draw engine or wincon I can put in Losheel.

My basic extra card draw will come on my turn. Unless something has gone very wrong, if Losheel is on the battlefield I should be drawing my card for turn and drawing at least one more card when I somehow manage to put an artifact creature onto the battlefield.

One way to do this is to take a page out of Hamza, Guardian of Arashin, and play some cards that will let me pay mana to make artifact creature tokens.

Pentavus and Thopter Assembly will let me pay mana to put +1/+1 counters on and take them off to make Pentavite or Thopter artifact creature tokens. That kind of back-and-forth would be much ado about nothing, but Losheel should turn it into card draw.

Retrofitter Foundry will let us make Servos, upgrade Servos into Thopters and upgrade Thopters into Constructs, though it does have to tap so we'll only use it once per turn cycle. I'm not running an Unwinding Clock in this draft, though if you have one lying around it's a good addition, untapping your artifacts quite nicely on every opponent's untap step.

Running this cycle might be overkill for Losheel. She really just wants to see those artifact creature tokens hit the field but I've always thought these cycles are kind of fun. Decoction Module turns a creature ETB into an energy counter. Fabrication Module turns that energy counter into a +1/+1 counter. Animation Module in turn will let me pay 1 mana when a +1/+1 counter is put on a creature I control to create a 1/1 Servo. On its own, these three cards can churn out as many Servo creature tokens as you can afford to pay for. You can kick off a loop on an opponent's turn, which is the point here.

What We're Digging For

I've got lots of artifact creatures to draw me cards when they hit the field. I've got creatures like Filigree Crawler, which will make a Thopter artifact creature token when it dies. I've got Myriad Construct, which will give me 1/1 Construct artifact creature tokens when it gets targeted by a spell, letting me squeeze a little extra value out of a Swords to Plowshares or Path to Exile if I feel so inclined. I've even got Ancestral Statue, which can bounce itself so that I can cast it again. This isn't the greatest card draw engine ever. It's no Sram, Senior Edificer, but it's not bad for a Mono-White deck.

The question that begs to be asked is simple - what are we digging for?

If I'm in an offensive mood, I might be looking for a way to make one of my Thopters a bigger threat. All That Glitters is an aura that will pump up the enchanted creature by +1/+1 for every artifact and/or enchantment I control. I won't have many of the latter, but my battlefield will have plenty of the former. If I draw into Anointed Procession, I'll be really happy to be able to double my token production with that White enchantment on the field. Cathars' Crusade needs little introduction. If left around for long enough, I could pump my army up by a lot and it pairs very nicely with Pentavus and Thopter Squadron.

I might be in a position where someone else has gotten out of control. All that card draw will make it more likely for me to pull into an answer to their boardstate. I'm running Fumigate, Rout, Day of Judgement, Austere Command, and Wrath of God, so there will likely be boardwipes. I'll also be more likely to pull into a Path to Exile, Swords to Plowshares, Disenchant or even Teferi's Protection so it's in hand when I need it most.

This list is definitely pumped up a bit more than my usual fare. I threw in Mana Crypt and Mana Vault and I'm definitely going to want ways to create colorless mana so I can use Eldrazi Displacer to flicker Solemn Simulacrum on my opponents' turns to get lands and draw cards. I might not be able to line up an interaction like that very often, but it will be wonderful when it happens.

You could drop out some of the higher priced cards if this list were out of your budget, but don't skimp on ways to create colorless mana or you'll risk losing the ability to use your Eldrazi Displacer as that card could be a real all-star in this list.

There you go. Lots of artifacts, and a generally fair gameplan. Build your board, draw cards, build some more. Wipe if you need to wipe, swing when you can swing, and do your best to out-value your opponents. I like that this list has ways to put out flyers and ways to create synergistic interactions that will hopefully keep your hand full and keep you in the game. I think throwing in an Elesh Norn, Grand Cenobite or Avacyn, Angel of Hope could push this up in power a bit if it's looking a little meek for your meta.

I've talked here about wanting to eventually have at least one mono-colored Commander deck in each of the five possible colors. I've got a growing set of Unglued basic lands and my dream is to have each of those decks pimped out with 26 of those sweet old basics.

I've "unglued" my Lathliss, Dragon Queen deck for Red and my new Octavia, Living Thesis for Blue, but I haven't committed those Unglued basics to any other mono-colored builds. I don't think Losheel, Clockwork Scholar is going to be the Mono-White entry in that project, but if I'm able to get some games in with it on TTS and the games are fun enough, I could imagine building it in paper and seeing where that takes me. I pretty much expect that White will be the last color for me to build and to get the "unglued" treatment.

This is my last Thursday column for the foreseeable future. I enjoyed upping the pace for a while, but two columns a week has definitely pushed my writing and deck-building output to the limit.

That's all I've got for today. Thanks for reading and I'll see you next Monday!