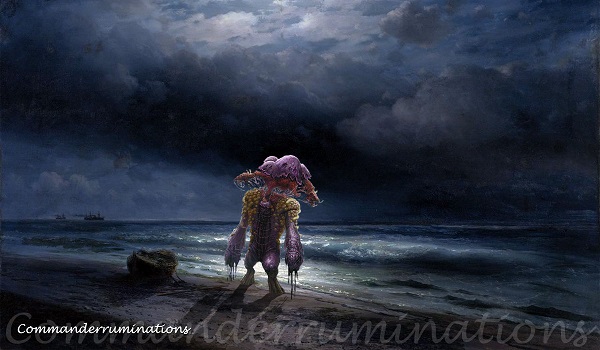 A Moonlit Night at Sea by Ivan Konstantinovich Aivazovsky (1885).

AUTHOR'S NOTE: This column was initially posted with a decklist centered around using Lonis to take your opponents' creatures and then using cards with the mutate keyword to turn them into incredible monstrosities. Mutate is not able to target humans, but that initial write-up missed the fact that they are ONLY able to target cards you "own". This is a revised Lonis list with that issue addressed, and is a reminder both of how complicated this amazing game can be and how important your feedback is. Thank you, dear readers, for your engagement and comments. You help us do our jobs better and we really appreciate it when you catch an issue that we missed.

When I first picked Lonis, Cryptozoologist for this week's Commanderruminations column, I was having visions of old X-Files episodes on my mind. I could build a theme deck around weird mutant creatures or maybe try to challenge myself to put as many creature types together at once. I then thought about how Lonis is a great 75% commander, where you will be stealing your opponents' creatures out of their decks as a main strategy for trying to win games. Then I saw what I really needed to see to get excited about this build - a way to play one of my favorite cards as the hammer to hopefully knock your last opponent out of the game.

My initial plan revolved around mutate cards, but I clearly can't use mutate cards to target the creatures I've stolen from my opponents. That removes a potentially fun avenue of play from this build. I think that means I'm going to need to focus on building a deck that can try to survive until you're one of the last two players and then you'll hopefully be able to pull a rabbit out of your hat and close out the game even if your opponent is at a zillion life and seems positioned to crush you.

This deck has a final wincon that is going to surprise a few people if they haven't played a lot of Commander. Before we get into all that, let's take a look at Lonis, Cryptozoologist.

This legendary Snake Elf Scout wants you to get a clue. In fact, he wants you to get lots and lots of clues so that you can tap him, sacrifice a bunch of them and have an opponent reveal that many cards off the top of their library. You'll get a nonland permanent with mana value X or less from among those cards and the rest go on the bottom of their library. You get those clues by having nontoken creatures enter the battlefield under your control. Those can be your own creatures but they can also be your opponents' creatures, so this ability helps to pay for itself.

This deck is built around trying to stay alive for as long as possible. In Blue and Green there are plenty of control elements that can help with that goal, but one way you'll do that is by not being particularly aggressive. Sure, you'll do what you can to stop any opponents' wincons but we generally want to get our own wincon in hand and hang out and try to be one of the last two players standing.

There are a handful of counterspells in this deck, from the eponymous Counterspell to Arcane Denial, Swan Song, Flusterstorm and even Pact of Negation. You'll keep those back to protect your wincon, but if the Prossh deck is about to try to drop a Food Chain, you'll also use them to keep someone else from winning.

Beyond stack interaction, you'll also be able to remove attackers, both en masse and individually. Propaganda can help to keep armies at bay and Constant Mists can buy you a few extra turns, but a bit part of this deck's survival will be in the way you play it. You're not an aggro deck. You're unlikely to look too threatening and it should be easy for an opponent to choose to take out the scarier players first, leaving you for last.

I should note that I didn't run any deathtouch blockers in this list, but that might be an option worth looking at. In some metas, if you've got a Deadly Recluse or a Moss Viper at the right time, you could end up not getting attacked for quite a few turn cycles. This is a meta call, to be sure, but I do often like to lean on deathtouch blockers to try to survive a bit longer in the game.

You might assemble enough creatures to be able to kill your opponents, but you're not an aggro deck so your main goal isn't to make an army and swing for the win. In Commander it's always an option, but if you're able to survive long enough to be one of the last two players at the table, this deck has a fairly effective way to try to close out the game.

Of course, they might have ways to shuffle your graveyard back into their library. You've got a Disallow to try to stop that trigger. They might have more counterspells than you. You've got Flusterstorm and a bunch of options to fight that battle. They might be a graveyard deck and can easily win now that you've set them up properly. These things happen, but they also might just lose by drawing from an empty library.

This kind of end game isn't for everyone, but not every deck has to be based around combat and battling it out in the trenches. I'm sure Lonis could be built with a different win condition, but I've always loved odd and unexpected interactions between cards.

Having extra ways to put cards on the bottom of an opponent's library just makes sense in this deck. I like Lonis' ability, but there will be times when I use a clue to activate Lonis, hit a basic land, and then find myself without a good Tunnel Vision target.

I'll also need to build in ways to tutor up this precious, precious card. Mystical Tutor will do the trick nicely, and Spellseeker can go get Mystical Tutor. Tamiyo's Journal not only gives me clues, but can also use them to tutor up a card. Ring of Three Wishes is another universal tutor that can be played outside of black.

This deck runs a lot of recursion spells, because I like my Tunnel Vision plan enough to want to be able to still go after that wincon even if it gets countered or milled into the graveyard. If I'm looking at recursion in my hand and I've got two players left I might even be able to use it on two of my opponents. Once they've seen it work the first time they might figure they're safe with it in the bin. Even if they exile my graveyard there's the chance I could hit Riftsweeper and get it back into my library.

This is positioned to be a casual deck, and while it has a decent bit of interaction, I don't know that it would fare well against high powered decks. I don't see a fringe cEDH Lonis build existing but I've been wrong before. Maybe there's some broken synergy or combo that lies waiting to be discovered, but my Tunnel Vision angle is the best I could come up with. If you wanted to tune this up, you could certainly add better mana rocks and crank up the control elements.

To play and have fun with this deck, you need to be willing to play a more responsive game - reacting to what your opponents do rather than being the aggressor. I could see the Tunnel Vision / Lonis, Cryptozoologist combination fitting into a wide range of Simic shells, so if you'd prefer to build this tactic around some other type of deck I think there's no reason not to try it out. Simic landfall with Lonis in the command zone and Tunnel Vision as a potential closer could be a lot of fun. My only concern would be making sure you can go for the win somewhat reliably. If your friends get sick of getting Tunnel Visioned, you might need to switch gears but I doubt this list would end up being too oppressive in even a casual meta.

I have to mention that I wasn't the only CoolStuffInc.com writer who was interested in Lonis. As soon as I figured out that I wanted to build a Tunnel Vision deck, I realized that my fellow Commander writers are really unlikely to go in the same direction with this Legendary Snake Elf Scout. I'm going to encourage them to take a crack at Lonis if they still have an interest in him, because I definitely think there is more to discover beyond what I was able to cover here today.

I am going to be opening a box of Modern Horizons 2 soon, and I'll be looking at it with an eye for whether or not I could build a commander deck out of its contents. This "deck in a box" challenge doesn't often leave me with a particularly good deck. Magic Expansion sets aren't often designed with this goal in mind, and if you don't open a 5 color Legendary creature, you can end up without enough cards to even fill out 60 non-land cards in your deck. I still find it a fascinating experiment so you may see that column pop up for next Monday's Commanderruminations.