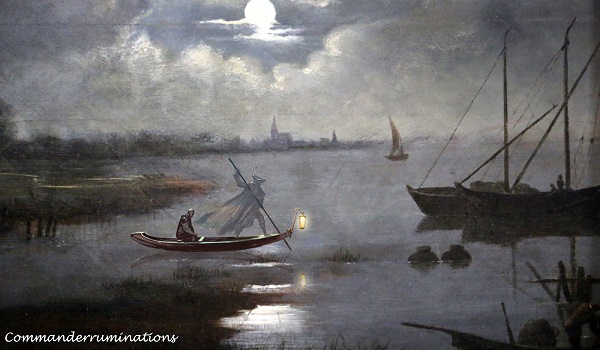 When looking at new commanders for a new column, I'm always drawn to ones I've opened out of booster packs. This week's column is about a Mono-Blue Human Wizard I opened in a pack that has some powerful abilities and also presents me with a puzzle of sorts.

How would you like to not get your spells countered?

What if it meant you would be in Mono-Blue, but couldn't counter any of your opponents' spells?

If you're thinking this sounds like the worst Mono-Blue commander ever, what if your instants and sorceries also got flashback?

Still, flashback is a powerful ability, and today I'm going to take a look at a build that will try to make the most out of what Lier, Disciple of the Drowned brings to the table.

My list is that rare Mono-Blue deck that isn't running counterspells. You certainly could run counters if you played enough bounce spells or expected to see a lot of boardwipes, but I didn't go that route. I decided to assume my commander would always be on the field when I needed to deal with a problem, so I went looking for answers that could work in this deck.

Both Disappearing Act and Familiar's Ruse both require me to bounce something to my hand. If I bounce Lier, my spell will be able to resolve. Hopefully I'll have saved my answer for something important enough that it'll have been worth it.

Unsubstantiate can bounce Lier to my hand, but it can also be used to bounce a spell back to its owner's hand, effectively countering the spell without actually countering it. Low mana spells might just find themselves put right back on the stack again, but I might be able to force an opponent to wait a turn before making their big play again. Venser, Shaper Savant is essentially an Unsubstantiate with legs. This Human Wizard can bounce a creature or remove a spell from the stack at instant speed. Once Venser is on the battlefield, if I'm running a deck with flicker spells and effects I should be able to keep my opponents' wincons at bay.

If Venser isn't a good enough reason to load up on flicker spells, I've packed this deck with other good targets. Archaeomancer, Mnemonic Wall and Salvager of Secrets will recur an instant or sorcery. Mulldrifter and Sea Gate Oracle will draw me cards. Farfinder, Pilgrim's Eye and Skittering Surveyor will put lands into my hand. Spellseeker will let me tutor for a low mana value instant or sorcery. I'm running Solemn Simulacrum as well, as putting lands onto the battlefield can help me ramp up to a big turn later on.

I'm only running a few flicker spells, as most of my instants and sorceries are devoted to drawing through my deck to find key cards. One such key card for Lier is Deadeye Navigator. I'm running Peregrine Drake, Palinchron and Great Whale so I can make infinite mana. Lier isn't an infinite mana outlet on its own, but with the ability to cast spells out of my graveyard, my hope is that I'll be able to dig my way to a more concrete wincon.

If I can combo off, I should be able to dig to a way to mill my opponents out.

To survive until that point, this deck is running plenty of ways to defend itself. From single target bounce like Chain of Vapor to Aetherize, Aetherspouts, Cyclonic Rift, Flood of Tears and Split the Party, my goal is to always have an answer if an army is knocking on my door. If I've got my Leyline of Anticipation or Vedalken Orrery out, I'll even be able to use my sorcery speed options at instant speed.

Lier, Lier, Pants on Fier might not be the cleverest deck name I've ever come up with, but so far I'm not hating it. Yes, I know it's spelled "liar" and "fire." I just love bad puns and goofy wordplay. Even though fier... er... fire isn't the most natural match to a Mono-Blue deck with "drowned" in the commander's card name, I had to go with it.

I'm really not sure if this much card draw - doubled up with Lier's flashback ability - will be enough to get to this deck's wincons. I think it will, but I haven't had a chance to play the deck in a game so I'm not 100% sure. I like the basic idea, and it's not like I'm usually going to be building a combat-oriented game plan. I do find myself wondering if there's enough recursion and enough ways to protect my wincon beyond having them be uncounterable.

If I had to tweak this first draft in any direction, I might wind up putting in a self-mill strategy. Thassa's Oracle and Laboratory Maniac alongside ways to turn infinite mana into card draw would make sense, but there are better ways to accomplish that than the path this deck would be taking. I could also see running extra turn spells that go to the graveyard, though those cost a lot of mana and there aren't too many of them.

I might play this list on Tabletop Simulator, but I'm not sure yet if I'll be building it in paper. I think it could end up being a lot of fun, but I'm not yet sold on playing a Blue deck that makes it harder to counter your opponents' spells. You also can't run the usual Blue counterspells to protect your own stuff unless you plan to bounce Lier to your hand. That's a little much to have to deal with, but not everyone likes playing counterspells and some of those people might want to play mono-Blue.

I might be mistaken, but I feel like Lier's drawbacks would be too great in high-powered metas to make him viable. If you've built a cEDH or high powered Lier, Disciple of the Drowned list, I'd love to hear about it. Flashback is powerful, so I could see some brave soul diving into cEDH deck-building around Lier.

If I were to build this in paper, I'd probably be taking apart my mono-Blue Octavia, Living Thesis deck and I don't think I'm ready to do that yet. Octavia certainly has had the occasional non-game, where I can't get her cost down and she never hits the field, but she's also had some fantastic wins that have me looking forward to the next time I'm able to shuffle up that deck and get a game in with it.