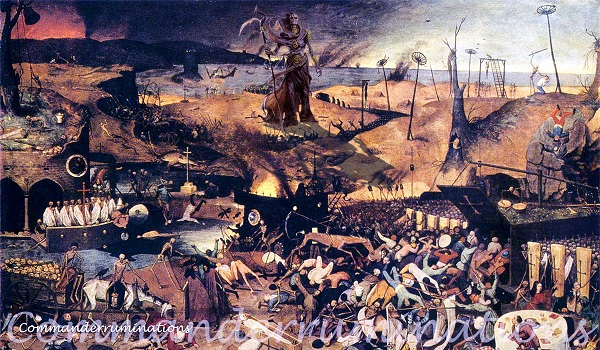 The Triumph of Death by Pieter Bruegel the Elder (1562). Lord of the Accursed by Grzegorz Rutkowski

This week's commander might not really be for our format, but I'm going to take my best shot at building up an interesting list that will have some fun with what he gives us. What he happens to give us is Zombies! Not just Zombies, but Zombies that can't block.

Jadar, Ghoulcaller of Nephalia lets me at the beginning of my end step if I control no creatures with decayed, I get to create a 2/2 black Zombie creature token with... you guessed it... decayed.

Getting a free creature at the end of your turn isn't a bad thing, but when they can't block, that makes them significantly worse. They can't pile up if I don't attack with them, and I'm stuck in Black so my options are a bit limited.

I like that I can sacrifice them to force-sac triggers from creatures like Fleshbag Marauder and Plaguecrafter. I like that I can flush them into an Ashnod's Altar or Phyrexian Altar for mana, or Altar of Dementia to mill myself or someone else. Even using a Viscera Seer to scry 1 without having to lose a blocker isn't bad, but Jadar is the kind of commander that I think of as having a "low ceiling." There are simply better Zombie commanders, both in mono-Black and in other colors.

Our challenge today is not to expound upon Jadar, Ghoulcaller of Nephalia's shortcomings.

Let's assume there's a good reason we're building Jadar. Maybe I want a low-power deck. Maybe I lost a bet or got challenged to build him for some reason. Maybe I just love his jaunty tricorn hat. Heck, I do love his jaunty tricorn hat, and I wish he was in Orzhov colors so I could give you a Fabulous Hats deck with Crusader of Odric, Thraben Inspector, Champion of the Parish, Slayer's Plate and every other cool in-color hat card I could scrounge up.

I'm not building Orzhov Hats, and I'm also not building Jadar with any other decayed cards, but I think I might play around with Zombies. I might not be pushing towards a high-powered deck but that doesn't mean I can't have a little fun today!

Not long ago, I brewed a mono-Black deck built around Ebondeath, Dracolich. That was very much a mono-Black goodstuff deck with Ebondeath meant to be something of a red herring. The goal was to try to fly under the radar and maybe get a good game by not looking like you're playing too strong of a deck.

My goal will be to build a "Zombie petting zoo" deck with a bunch of my favorite non-humanoid Zombies.

That Zombie with decayed that we get on our end step?

He's the groundskeeper. He'll be tasked with cleaning up after all of our Zombie animals. If you think cleaning up aardvark Poop and feeding the ocelots sounds like an interesting job, what if you also had to sweep up cast off bits of decayed flesh from the Zombie pangolin and rotting albatross?

OK - in truth I don't think there are Aardvarks, Ocelots, Pangolins and Albatross cards in Magic, but I'm pretty sure I'll be able to find some interesting cards to include. I'm not aiming for a high-powered deck, so I can pick art I like and cards that just strike my fancy. This is the kind of a deck you'd play against new players with no real expectations of winning. You're there to have fun, help them learn about the game, and play a weird deck with a silly theme.

This turned out to be one of those decks where I wanted to run certain cards, but just couldn't bear to put them in an EDH deck. Wandering Tombshell is a 1-power, 6-toughness Zombie Turtle with some wonderful art, but it has no abilities. I might not be trying to build a deck that is going to crush tables, but even when playing with new players I think parading out a bunch of bad vanilla creatures that bring nothing extra to your game is sending the wrong message.

There are SO MANY options available to deckbuilders, given that we can pick from the entire history of Magic, that it feels wrong to run cards like Wandering Tombshell, Dross Crocodile or even Wretched Camel.

My initial list got pared down from 42 creatures to 32 creatures, as I removed creatures that were overcosted or brought nothing to the party and added in an assortment of artifacts, instants and sorceries to help round out the deck.

I still found room for Gurmag Angler, because it gives me a decent body and has cost reduction built in so it won't always cost 7 mana to play. Lurching Rotbeast and Ghoulsteed can probably share an exhibit, though the former will sometimes find itself cycled into the graveyard. Rotting Regisaur is the top of my power scale and comes with a serious downside, but I couldn't resist adding it in.

What Zombie zookeeper could resist adding a genuine, bona fide Dinosaur if it could?

In this case, the team is the team of non-Zombie staff that will be running my Zombie zoo. Greg the Groundskeeper (our Zombie token with decayed) can't handle this all on his own. He'll need some help.

One of the things I looked for when putting this together is ways I can use Greg. My basic goal is to always have a card in hand that requires me to sacrifice a creature. Usually, that is meant to be an inconvenience, but if I've got Greg around, it's not a big deal. Like any good Zombie, he'll come back up out of the ground on my end step, he can't block, so I might as well put him to good use.

Every theme park needs greeters, so I've got Deathgreeter ready to welcome people to the petting zoo, warn them not to actually pet the animals, and of course give me a little life gain any time a creature dies. This deck will want to see creatures die. I'll mostly be sacrificing my own guys but that life gain could come in handy.

I might not be planning to loop any creatures, but a steady trickle of creatures dying should work with cards like Falkenrath Noble and Blood Artist. This didn't end up being a strictly tribal list, nor did I adhere too closely to my plan of only running interesting Zombie animals, but I think the list is better for it.

I've included every black card with the exploit ability that I could find. Creatures with exploit allow you to sacrifice a creature when they enter the battlefield and we should always have someone we can throw under the bus.

Rakshasa Gravecaller will give me two Black Zombie creature tokens. Vulturous Aven will draw me 2 cards at the cost of a creature and 2 life. Sidisi, Undead Vizier is the kind of creature that can be an all-star in a high-power deck, letting you tutor a card to your hand. In this deck it's still very good. You just don't happen to have any major combo pieces or heavy hitters to tutor for, as it's meant for low powered, casual play.

I thought about running Conjurer's Closet to have an exploit trigger on future end steps, but there just weren't quite enough ETB triggers in the deck for it to make sense.'

One of the best things about Jadar is definitely his ability to give us sac fodder on our end step. All those black spells that draw us cards and force us to sacrifice a creature or two will be easier to cast with our ever-returning decayed Zombie creature token. I'm running the Black card draw spells that force us to pay life as well, as card draw is really important, even in a deck meant to be super casual.

Even when I'm not building the most powerful of decks, I tend to rely on staples. As a result, I don't usually build very budget-friendly decks. If you're looking for a deck to switch to when you're at a weak table or you just won a couple and want to ease up on your tablemates, a deck like this shouldn't cost you too much. As of this writing, this list weighs in at less than $300. You can build stronger decks for less, but that's not really the point of today's build.

Jadar's Zombie Petting Zoo gives you a chance to play a goofy, fun game against other decks of similar quality. If nobody is trying to kill someone or combo off before turn 10, your game might go a bit long, but there's no reason it can't be fun and you might even land a Twilight's Call or Patriarch's Bidding with a full graveyard and position yourself to go for the win.

One of the positive things about a deck like this is that you can shift fairly easily to give it a different flavor. You could load up on regular Zombies, play a lot more removal or even start adding in more powerful staples like Bolas's Citadel and Sheoldred, Whispering One if you want to push up the power level. Starting with something that isn't far from a precon level deck - and might even be weaker - definitely gives you room to grow. You could change a few cards each week, or just play it for a while until your playgroup gets good enough that Jadar is consistently outclassed. That might not take long.

I'll be honest, it wasn't easy for me to trot out a Zombie Petting Zoo list and try to focus on the fun. The reality is that I can't remember the last time I played in a meta where this kind of deck would fly, or even shamble its way to a win. Just the other night I played a game with my Drizzt Do'Urden deck and then my Inferno of the Star Mounts deck, only to find out part way through the evening that one of the guys was loaded up with cEDH staples like Mana Crypt and Mox Diamond. I switched to my Jarad, Golgari Lich Lord deck, but still managed to lose the last game in what was a surprisingly fun night for how well I did.

This ended up being one of those weeks where a new legendary creature - Vadrik, Astral Archmage - caught my eye the day before I had to dive in and get this deck written up and wrapped neatly into a column. Vadrik was getting my creative juices flowing. I'm really excited about diving into that build and with any luck I'll have it for you next week. If it works the way I hope it does, it might edge up towards cEDH territory.