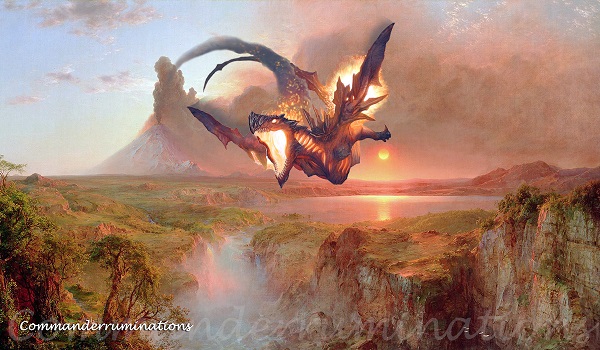 It's been a while since I've come up with an idea so silly that I had to devote an entire column to it. I write a lot of columns about building Commander decks and generally do my best to make them viable and fun. I often build decks that have somewhat unrealistic game plans. I am an optimist at heart. My crazy ideas always don't seem that crazy until I build the deck, play it, and realize that you sometimes have to play a deck a dozen times to get your weird pet wincon to actually show up.

Today's deck has a weird, fun, crazy plan but I don't think it's going to be impossible to pull off. As you may have guessed from this week's title, we're going to be building around Brudiclad, Telchor Engineer.

This pesky little Artificer has a lot going for him. He's a 4/4 Legendary Artifact Creature who gives our creature tokens haste. At the beginning of combat on our turn we get to create a 2/1 Blue Myr artifact creature token. Then we get to choose a token we control and turn each other token we control into a copy of that token. They don't change back, though at the beginning of combat on your turn you can choose another token to change all your tokens into.

That's all very exciting, but Brudiclad is in Izzet colors (

). Over the past five or six years I've less and less fond of six mana commanders if they're not in Green. A reasonable casting cost four or five years ago feels like a moderately high casting cost to me today. That may have as much to do with my growth as a deck-builder as it has to do with Wizards of the Coast printing better and cheaper legendary creatures.

That high casting cost isn't enough to keep me from at least brainstorming this idea and putting together a first draft decklist to share with you.

If you haven't guessed what I'm up to today, all I have to say is...

You might think me Goofy, but this is a serious deck and that isn't even the name of one of the Dwarves from Disney's Snow White. We're going to be building our tokens deck around a creature who I don't think was even designed with Commander in mind.

The more of these guys we have on the field, the more powerful they will be, much like a number of Black creatures you might be familiar with.

If we have one copy of Seven Dwarves on the field, it will be a 2 power, 2 toughness creature.

Running 7 of these cards in your deck will put you in a pretty good position. There's no guarantee that you'll draw into one, but this will be a deck where you might consider mulliganing until you have at least one.

We're not going to draw into all of our Seven Dwarves even if we were running Rhystic Study, Consecrated Sphinx, and every other draw spell ever printed. It's just not realistic to plan around trying to win with just those seven cards. We want to use Brudiclad's ability to turn all of our tokens into the same kind of token and if things go right, we'll have made a token copy of Seven Dwarves when we go to combat.

We've got lots of options in Blue. Both Cackling Counterpart and Quasiduplicate can get used more than once. Rite of Replication can be cast on one Seven Dwarves or it can be Kicked for an extra five mana to make five Seven Dwarves. I'm also running token-creators like Supplant Form that can be used on an opponent's creature if there is something more powerful than Seven Dwarves.

We also run a few artifacts that can make token copies of a creature. Mimic Vat will need the creature to die, but it's likely we're going to send a few Dwarves to the graveyard over the course of a game. Soul Foundry will require us to exile a Seven Dwarves from our hand to imprint it, but we're running more than one in this deck. If Soul Foundry gets blown up before we can use it, our plans aren't completely foiled. Hour of Eternity is worth calling out because it will let us create 4/4 Black Zombie Seven Dwarves tokens.

I'm not holding my breath for a Disney reimagining of the classic film - Snow White and the Seven Black Zombie Dwarves. Maybe if Tim Burton were involved?

From Seven to Seventy

The problem with this plan isn't that it's unrealistic. It's a tad convoluted for any responsible deck-builder but I enjoy weird decks and difficult wincons. Part of the fun of casual EDH for me is seeing what kind of ridiculous stuff you can get up to. That's why we're not going to be satisfied with just a few 2/1 Myr creature tokens.

A bunch of token generators will find their way into our list along with Talrand, Sky Summoner and The Locust God along with old favorite Chancellor of the Forge.

If you think getting 70 Seven Dwarves sounds impossible, well... you're probably right.

Let's look at how that could actually happen. This isn't an actual goldfish, just a rundown of how things could go if they went particularly well. Our plan will start falling into place before we draw our first card. I won't break it down by turns, but just give you a general flow of how your deck might play out. I'll list the number of creature tokens in brackets as we go.

Show Chancellor of the Forge in your opening hand and start with 1 Goblin creature token. [1 token]

Play Brudiclad, Telchor Engineer. Make a 2/1 Myr when you go to combat and turn all 6 of your tokens into Myr. [7 tokens]

Chump block 2 attackers from another opponent who is getting nervous and decides to attack you. [15 tokens]

Pray nobody is paying attention. They probably are.

Pray they don't have removal. Let's pretend they don't.

Play Sakashima the Impostor as a copy of Chancellor of the Forge, making 18 more Goblin creature tokens. [33]

Play Spark Double (or Clone, or Clever Impersonator) as another copy of Chancellor of the Forge. Make 37 more 1/1 Goblins. [70]

Swing with 71 Seven Dwarves creature tokens, each of which has 73 power and 73 toughness.

Was all of this a little unrealistic? Possibly. Was my math off? Feel free to go back through and check it. I should be close, keeping in mind that each Chancellor of the Forge ETB counts the non-token creatures when it makes its Goblin tokens. It's not exactly seventy, but I think it's entirely reasonable to think you could get up to the kind of numbers that could kill off an opponent, if not an entire table.

Most Commander games actually involve interaction and removal. Nothing goes as smoothly as you might like, but "Magical Christmas Land" for this deck is where we make a ton of tokens, find a way to make a Seven Dwarves token and then turn our token army into a Seven Dwarves army.

Even if the deck's best games aren't as ridiculous as the series of plays (without any opposition) that I outlined above, I think you could probably have some pretty crazy games when everything goes well.

This deck won't have the inevitability of a cheap two-card combo and you don't have the luxury of having lots of tutors or a Commander with a low casting cost, but if you're in a casual enough meta I think this deck's dream scenario could be worth pursuing.

If you don't find yourself drawing into your Seven Dwarves, you also have the possibility of making a token copy of an opponent's Blightsteel Colossus, Consecrated Sphinx, or whatever other great creature they have on their side of the battlefield. A Brudiclad deck that is able to make token copies of your opponents' creatures will be nothing if not flexible.

This is probably the most clone and copy heavy deck I've ever thrown together, but you'll want to have ways to make creatures that are clones of Seven Dwarves if you're going after that game plan. With seven cards that could enter as a copy of Seven Dwarves along with Mirage Mirror, which can become a copy of any artifact, creature, enchantment or land, we're actually running 15 potential Seven Dwarves in this deck.

My original Brudiclad deck had a few interesting tricks up its sleeve. The dream with that deck was to make a bunch of Fire Servant tokens and then kill the table with Grapeshot. It was a silly dream, but I think this whimsical Seven Dwarves gameplan may be a little more realistic. Sadly, our Dwarves don't have evasion or trample, but if you're in a casual enough meta and you happened to get your hands on 7 copies of Seven Dwarves I could see this being a really fun build.

Did you enjoy today's little thought experiment of a deck?

I like exploring new territory but I have a soft spot for weird interactions and creative and out-of-the-ordinary wincons. Combining Brudiclad and Seven Dwarves is just the sort of goofy plan that I was thinking of building if I had won the Great Eldraine Bake-Off and had opened up another box full of Throne of Eldraine booster packs. Sadly, I didn't fully appreciate how much the contest was about photography rather than about making a recipe for Magic: The Gathering players... I'm not salty. YOU'RE salty! I really should have known better, but I have to admit that the winning entries were very impressive.

If you'd like to see my Eldraine Bake-Off entry and read a column about what I thought of the whole thing, let me know in a comment below. I'm also still thinking about building Kenrith combo or Kenrith Knight Tribal, or possibly a mix of both, so if that sounds more like the kind of column you'd like to read please say so. I enjoy hearing from readers and I'm nothing if not easily swayed by your comments.

I've also been brainstorming a column about various metaphors for EDH. Is our format like sparring in martial arts? Is it like a dance? Is it like poetry? Is there anything that Commander can aptly be compared to that would reflect its range of playstyles and power levels? It's an idea I've thought about exploring in a column so let me know if you think I should flesh that one out and turn it into a column.

That's all I've got for you today. Thanks for reading and I'll see you next week.