Letâs start things off with something fun. Do you have a copy of Garruk Relentless near you? If you donât, go ahead and hover over the convenient link. Now open up a new tab, and Google âYngwie Malmsteen Relentlessâ. Go ahead. Iâll wait right here.

It would appear that Eric Deschamps is a fan of metal. Iâm actually listening to the album as I write this, out of curiosity. I havenât heard much of Malmsteen before, but Iâve heard enough to know that he is a master shredder. Anyone who singlehandedly creates a new genre gets major props.

Garruk Relentless is one of those cards that is very hard to evaluate, not only because thereâs never been one quite like it, but also because it does so many things. Planeswalkers in general are complex cards, and decision trees that result from them being in play have many branches. Before we go further with this, let me explain what I mean by a decision tree.

Letâs start with a simple example:

Say we have a Runeclaw Bear on the battlefield and a Titanic Growth in hand. Our opponent has a 3/3 Gorehorn Minotaurs and an untapped Mountain. Heâs at 6 life and may or may not have a Shock. We can represent this scenario with the following decision tree: 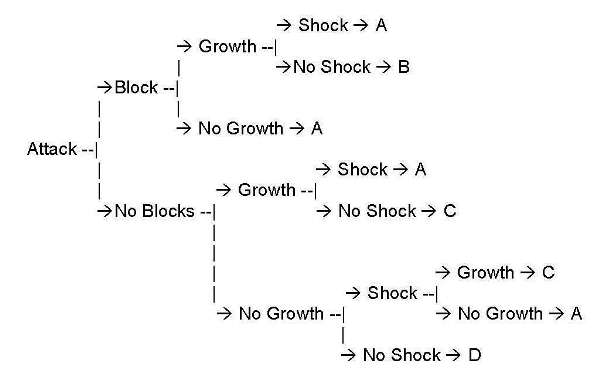 Iâve only listed four outcomes to keep things simple, but itâs not hard to see that there are in fact eight distinct outcomes. All of this results from one attack and our opponentâs single Boolean decision on whether to block. So you can see that even with our bare-bones model here, the few decisions to consider can lead to many different outcomes. In turns out that the number of outcomes that can occur grows exponentially with the number of possible decisions.

Like I said before, planeswalkers are complex cards because they introduce so many different decisions. Back to our metal guitarist, the fact that he has five abilities makes a huge difference because of the exponential growth of the decision tree. Magic is a complex game, so this shouldnât discourage you from exploring what he can do, but the complexity means it will take longer than usual for him to find his place.

Letâs take a look at some lists that have already begun to incorporate him:

The great thing about Garruk Relentless is that itâs easily splashable, which is why a deck like Bernalâs nearly-mono-Red can run it. The mana cost alone means that it will likely see a lot more play than Primal Hunter, even though I think the latter is more powerful. Kiblerâs deck is interesting because of the two/two split on Garruks. I suspect itâs because heâs not sure which one he wants more, but itâs also possible that having both is something he wants. Playing Relentless on curve, using it twice, and intentionally letting it die so he can play Primal Hunter the following turn could be part of his game plan. Keep that in mind when building decks for your metagame. If you find that Relentless doesnât stick around for more than one or two turns, and your deck can support it, playing both is probably fine.

I hope you guys found this exploration of decision making interesting and useful. Any of my eagle-eyed readers may have noticed that my articles are running on Tuesdays now. My workload at school has picked up to the point where Iâve decided that writing on weekends will be better for my Magic/school/life balance. Writing about Magic is definitely something I enjoy and want to continue doing on a regular basis, but school is my first priority. Iâm likely going to be applying to grad school next year, so I have a lot of pressure on myself to get really good grades this year.

Next week, I think Iâll look at the results from States and go over some of the lists that I like. As always, feel free to comment below. Iâm always looking for article ideas, so if thereâs something you want me to talk about, drop me a line.