Personally, I look at legendary characters and see who hasn't seen print in a while, or at all. That is the group text discussion, and I'm here to share some information that may have been overlooked. I called up Jay Annelli, Continuity Consultant for Wizards, and Cary Thomas Barkett, the master wizard behind mtglore.com for some fact checking. Cary's site in particular is where you should go to find real citations with verified sources, and Jay "knows things"... or so he says.

Since the 36 planeswalkers have been discussed by every imaginable person, let us examine who is still alive today. There were 45 legendaries in Ravnica in the original three-set block and the second installment. Let's take stock of them, share some stories, and predict if they'll be in the next set. 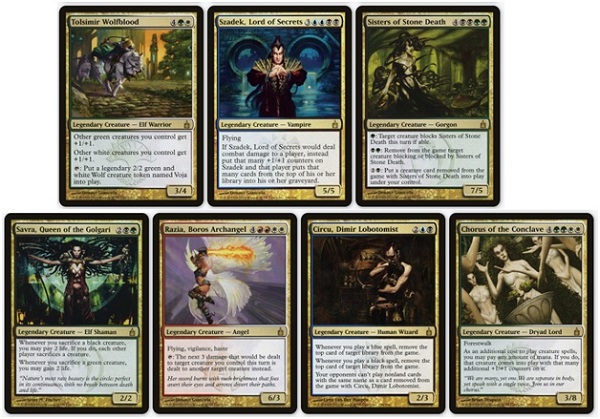 As Tolsimir was reprinted in the Guild Kit for Guilds of Ravnica, and is an elf, we should see this character soon as he did not die "on screen" in the previous sets. I would think in commander because of the anthem ability, but with the war, that would also make sense. A quick note from Jay: Voja is Biracazir's grandsire, and Voja at least is implied to be dead. It is unknown whether Tolsimir can resummon a new wolf, or reincarnate/resummon Voja.

Killed by Azorius, specifically Augustin IV, his ghost is missing in action, probably disappeared along with Agrus' ghost when Agyrem disappeared as shown in the card Ethereal Absolution.

This, as a reminder, is a painting that no longer exists. Donato Giancola painted over it and its current whereabouts are utterly unknown. 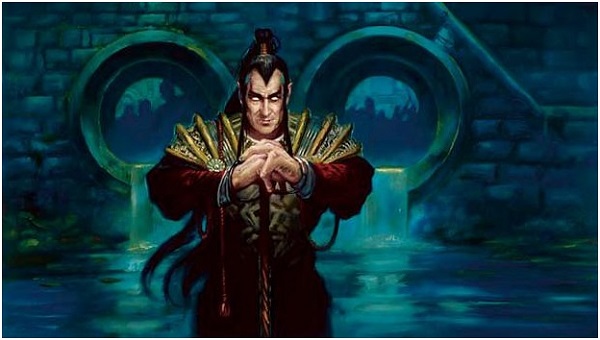 Killed by Svogthir, former lich, former elf for the first two sisters. Having Ludmilla rise to the surface just as Golgari regains power would be a great addition to War of the Spark. 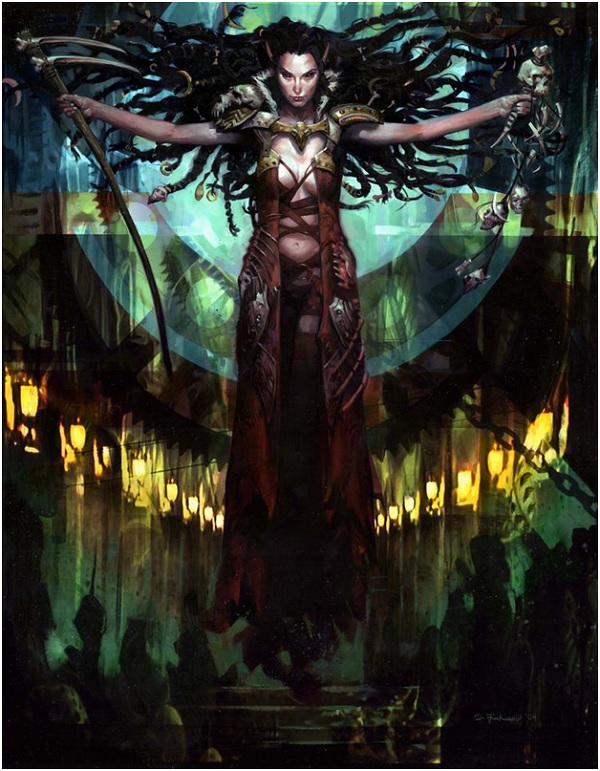 Original painting in a private collection

As with most Dimir members, it's hard to tell if they're alive or dead. He would make for a great addition in War of the Spark. Like Tolsimir, he was also reprinted recently in the Guild Kit. Cyril the artist is still battling his cancer diagnosis and if you want to send him a note that you love his art, I strongly encourage you to do so. 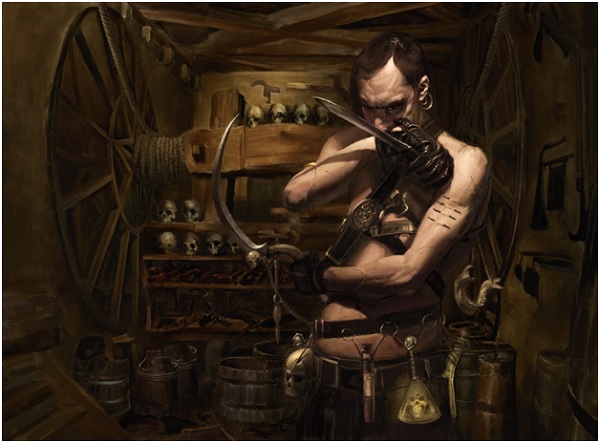 Chorus of the Conclave

This "card" represents a concept more than a physical creature. Selesnya works as hive mind and the dryads were the voice. Technically Trostani is who the Chorus was. Three dryads all bound together to make Trostani, represented by a recent reprint, still exist to this day.

Last seen: His spirit (ghost) was seen in the Agryrem precinct office working for Boros. Since ghosts were freed via Ethereal Absolution, he is also likely totally gone. 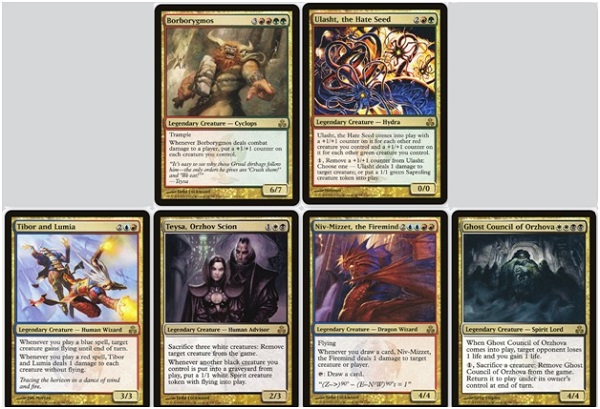 Run out by Domri Rade, Borborygmos now roams the wilds of Ravnica as a former leader.

With Gruul preparing for war, I look for a callback to primal, furious nature of Ulasht attacking "peaceful" saprolings of Selesnya in all out war. 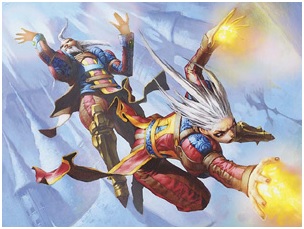 The married couple Izzet members were created before couples were created as completed concepts in Magic like in Kynaios and Tiro of Meletis, Anax and Cymede, Krav, the Unredeemed with Regna, the Redeemer, Pia and Kiran Nalaar, and Ever After. I would think they are a shoo-in for a Commander product, especially with all the heavy Izzet characters, and won't make the cut in the War of the Spark.

"Show a husband-and-wife team of Izzet archmages. Tibor, the man, is a master of the air and can grant both of them magical flight. Lumia is a master of earth magic and can bring magma to the surface, scorching enemies on the ground. Tibor is wise, noble, head in the clouds. Lumia is fiery and wild-eyed. Both should have the Izzet look/feel in costuming, hair, etc."

She has gained a lot as a mortal woman working with Kaya for the Orzhov.

The dragon is still very much alive with plenty of speculation as to his schemes and awareness of the planeswalkers.

The ghosts were exiled, destroyed again by Kaya in the card Kaya's Wrath. 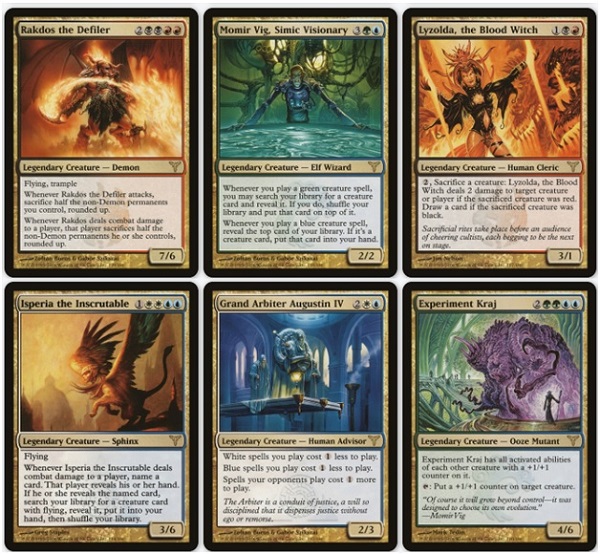 The guild leader is still very much alive, printed as a new card recently in Ravnica Allegiance.

The final deed of Project Kraj was set into motion as Momir Vig was killed by Agrus Kos.

She perished in the Dissension novel, also confirmed in Illusions of Child's Play, Not even Lyzolda had that many enemies.

Killed by Vraska as shown on Assassin's Trophy. 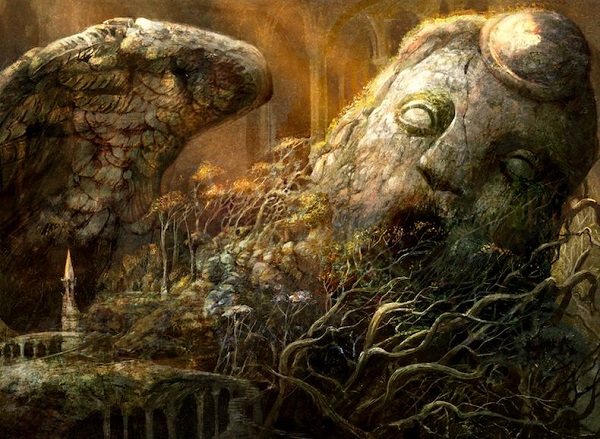 Killed by Szadek/Agrus Kos who blew up the engines of the Parhelion, blowing up everything in its midst. 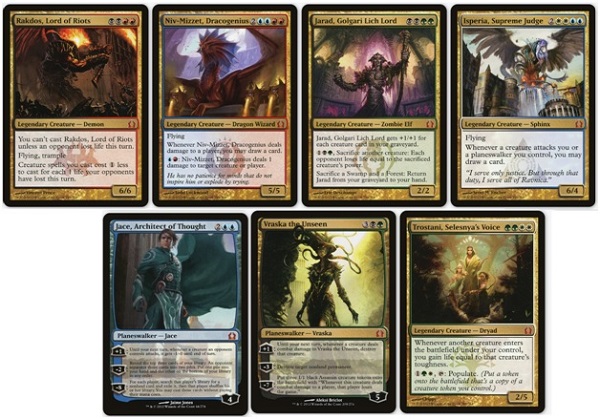 His slumber situation is a bit of a problem, but he's back awake and since reprinted. He's not likely to be reprinted in a new card for the fourth time overall.

Jace is to find Niv-Mizzet and he assumes simply asking for help will be enough. "He could challenge Nicol Bolas both physically and mentally, plus he'll be furious to know there's a dragon smarter than he is."

A mention of a "new lich" would assume he was killed off screen, though his whereabouts are unknown. In the Golgari, you quite literally die a few times, meaning he may not be totally gone this go around. Vraska would have had to kill him to take control, making the assumption that he's dead.

Killed by Vraska in Assassin's Trophy.

As mentioned before, they're still around.

The living Guildpact is to rendezvous on Ravnica, and while it feels like he's ever-present, he was not made into a card for the Guilds of Ravnica block. I would expect him to be a card in War of the Spark without question, especially as Vraska has been already printed.

Her memories of hers are less than stellar, an idea she asked of Jace, ""I need you to temporarily take my memories of you." 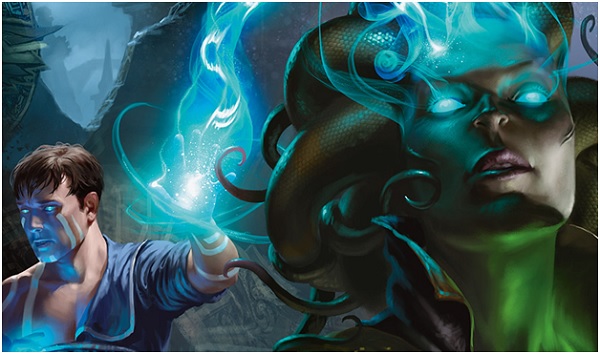 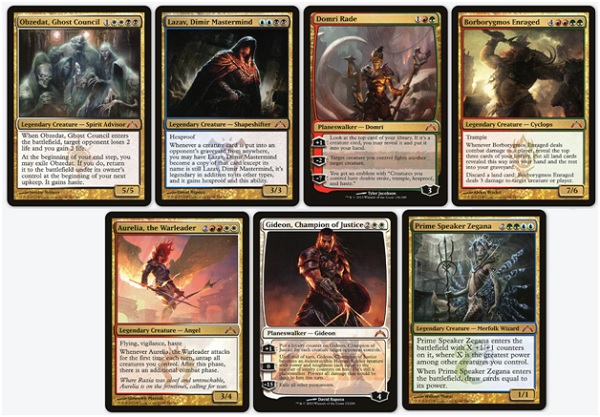 While ghosts before, they were finally, eternally put to rest as shown in Kaya's Wrath.

Recently given a reprint in the Guild Kits, a new card in Guilds of Ravnica and like Circu, likely to survive any conflict as his corporeal form shifts just as easily.

He's really into pigs now. His guild also thinks he will be instrumental in their apocalypse myth as mentioned in the card Rhythm of the Wild.

Working alongside Gideon, we are likely to see a greater role for her in the upcoming war, especially as she welcomed Gideon to the guild, and she recently has a new card with a mentor ability built for war. She's unlikely to receive another new card though.

With the Blackblade in hand, Gideon could be the one who can finally weaken Nicol Bolas. Though as Tin Street Hooligans mentioned, it won't likely be Gideon to actually kill the dragon. They think Vivien Reid will be that character.

As the previous Simic leaders were all killed due to cytoplasts being ripped from their bodies, or personally killed, the merfolk came from the depths to rebuild the guild. 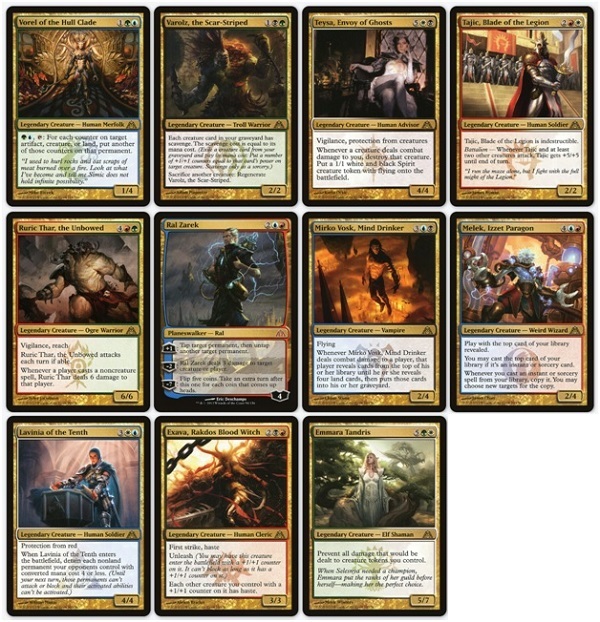 Last seen advocating for Vannifar instead of Zegana to be guild leader.

Last seen alive and with his symbiotic regenerative powers as troll/plant, he could very well be reprinted.

A fan favorite, she has been reprinted already and appears to be one legendary character safe for surviving the upcoming war.

Tajic was already reprinted as Tajic, Legion's Edge and is still alive for the current time.

They are still alive, as mentioned in Rage of the Unsung as playing a role in the War of the Spark. As a trivia note, the Tyler Jacobson piece below was nominated for the best institutional art award in the Spectrum art annual. That won't keep the character necessarily alive, but it's notable to mention. 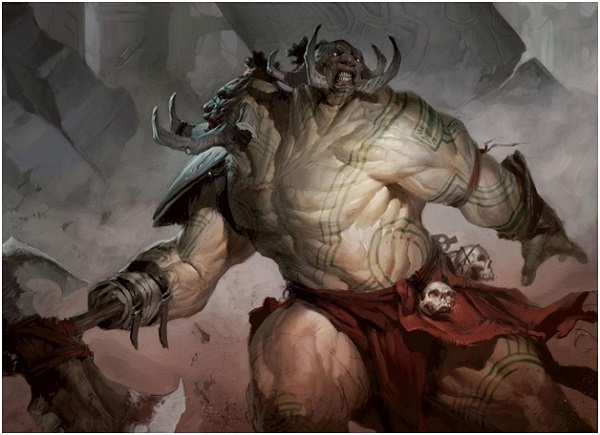 As one of the thirty-six planeswalkers, he's still well alive. Since he was just reprinted twice, near zero chance of getting another card in War of the Spark.

As Mirko has changed bodies, technically more lich like than alive is an apt descriptor and hard to tell from sources is killed off screen or not.

Killed by Ral Zarek before the running of the maze in Dragon's Maze. Ral took his spot, as it were, as explained The Secretist, Park Three.

As the exiled renegade, she is still alive. Lavinia can be a future guild leader with Isperia dead or a future plant needed for the future return. 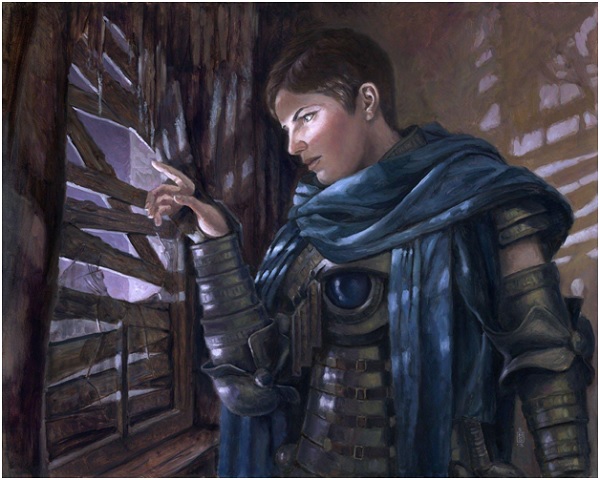 Original painting in a private collection

Her whereabouts are currently unknown.

Recently reprinted and a strong contender to have a small story bit in the war. 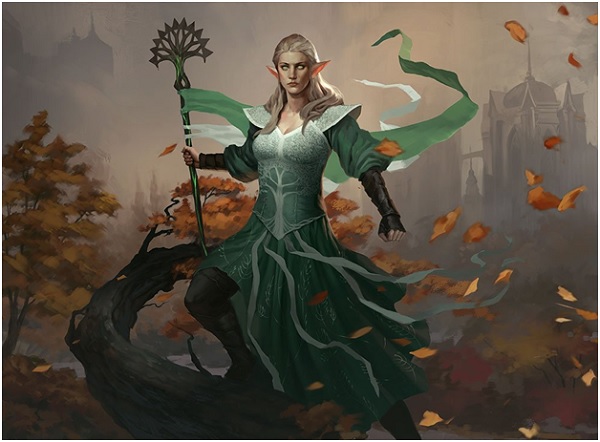 Emmara, Soul of the Accord by Mark Winters

With those in mind, look for the long living creatures like the elves or angels to make a return. Most humans unaccounted for are likely dead. We still don't know of Feather, the Boros angel, and while she could be in War of the Spark, a Commander set is also possible for her. Let us hope she can join us soon, she's the main character from the novels that is yet to have a card made for her from the block of entirely so many characters.