After the original Magic artwork for Arcbound Ravager sold for $45,200 in a public auction on the Facebook group MTG Art Market, you may ask yourself: is Magic art that expensive? That can't be right.

Why was this artwork so expensive?

I'm here today to explain not only why it sold for $45,000, but also give historical examples of where we are in the market for Magic art as well as a few projections on where we're heading next. 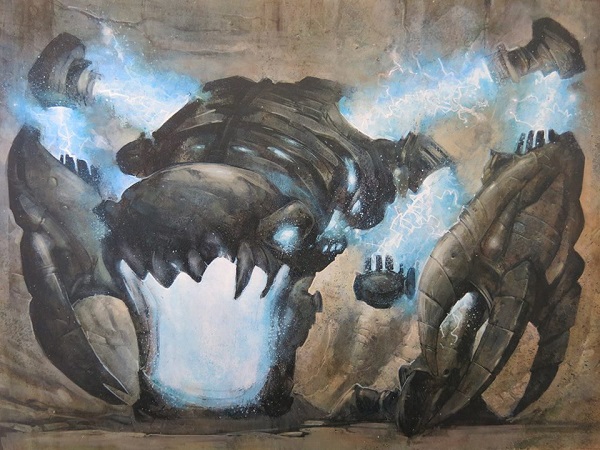 To frame the painting in context, compared to recent sales, the second highest public auction was half that amount. Ravager topped the most recent public auction of Force of Will by Terese Nielsen from Eternal Masters on eBay, sold for $21,319.99. 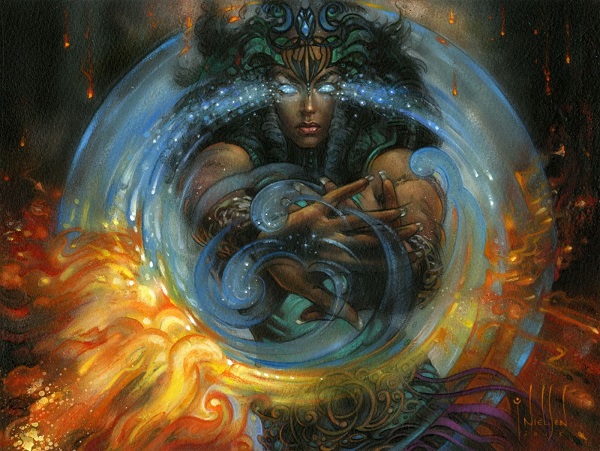 Force of Will by Terese Nielsen

To be fair, these are both fun depictions and good paintings, but the art is not why these paintings sold for more than your new Kia Rio.

To research an article a few years ago, I did a longer study on whether a Spectrum-included artwork increased the value, all other things being equal. (Spectrum is an art annual for which a jury picks the best submitted sci-fi and fantasy artwork in the industry.) I found no statistical significance in terms of art choices. Award-winning art, that is technically superior created artworks, did not impact pricing.

What did matter, was the original printing and the frame, old or modern. If a reprint was a much better technical work, that card wasn't more valuable unless it was more scarce, like a promotional card. The original printing, irrespective of art quality, is beloved due to familiarity and nostalgia.

This matters because the reprinted cards with new art aren't as preferred because they haven't been around as long. Logically, their art is also worth less than the original painting.

What separates these two paintings from any new reprinted card is that these cards are highly used in an established deck.

Being Terese Nielsen or Donato Giancola will add a premium, yes, but what brings them into a stratosphere is being from a card that a deck is built around.

While a noted sideboard card artwork will be valuable, Arcbound Ravager nearly hit $50,000 because it is the card Affinity is built upon, and when two bidders realized that, a bidder war was created to exponentially increase the price.

Very few card artworks will rival Arcbound Ravager's final realized auction price because only a few paintings are the crux of a deck.

This article will list which paintings can rival it, for ease of reference.

My favorite Vintage writer is no longer writing because he, Nat Moes, was picked up by Wizards to work in-house. He has the best primer and he breaks down how Vintage is traditionally explained.

Many would-be Vintage players are introduced to the format with the idea of pillars: five cards and their resulting decks that form the basis for the metagame. These are Mana Drain, Mishra's Workshop, Dark Ritual, Bazaar of Baghdad, and Null Rod.

Those four cards are the next step up for a card like Arcbound Ravager for their original art valuation. This is obvious.

Of the Mana Drain iterations, there is only one traditional painting. That piece, were it to hit the open market would likely be at the top of the public Magic painting auction's price with ease.

Mishra's Workshop has only one traditional painting, just like Null Rod. The former would be a six-figure original painting, with Null Rod being closer to Arcbound Ravager, likely in the market. (Sure, there are other must play cards with MUD/stax decks, but really, it's Mishra's Workshop, then everything else. Though, Sphere of Resistance, for example, would likely be more expensive than any modern staple build around me card simply due to the status and wealth of Vintage players who skew older and of a higher socioeconomic status.)

Bazaar of Baghdad has two traditional paintings, with Christopher Moeller's being an online-only promotional card that sold for $10,827 on eBay in 2014. The original by Jeff Menges would likely be five to ten times the final realized price. Dredge builds have a few options with Cabal Therapy, Golgari Grave-Troll, Lion's Eye Diamond, and Stinkweed Imp, though these are good options compared to the great of Bazaar in terms of highest valued artwork of the graveyard and dredge building world of Vintage.

The art of a four-of Vintage staple would only be rivaled by the Power Nine itself. (I refuse to believe Time Vault and Library of Alexandria would top the dredge, shops, and drain built Vintage builds. In most cases, they would be private auctions anyway, like the arguable Wrath of God final artwork private sale price being $37,000 or $80,000 from a few years ago.)

And as for Dark Ritual, the old Vintage standby, the original Alpha painting is still not for sale from the artist. The subsequent printings have all been sold from their respective artists and would be valuable, but not marquee like other artworks in this article. Some decks like Dark Ritual, but you just don't see people looking for the variations of it on any Facebook art groups yet. 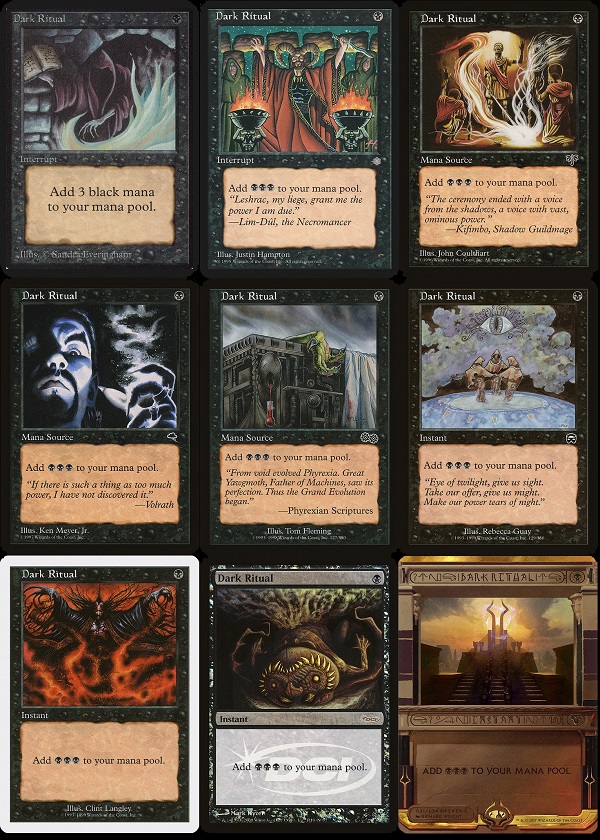 As for other Vintage staples, Oath of Druids decks are plentiful and the namesake card fits into the criteria set for this article. The original is very much held in a collector's hands and won't hit the public auction block save an emergency situation.

Paradoxical Outcome Vintage decks will be sad to hear that there is no traditional final work by Nils Hamm, but a color study does exist, which I own.

Eldrazi Vintage builds really are Thought-Knot Seer builds, which only has a color study and wouldn't really fit our study today but is notable despite being a digital final. Chris Rahn did do Matter Reshaper, but the card isn't a playset in the deck.

Eldrazi Vintage builds also have Ancient Tomb, which is very much in a collector's hands. Sorry to say, the unstoppable Lyon's newer piece is digital.

Did I miss a Vintage mega staple? Sound off in the comments.

The most playable cards in the Legacy format that are valuable to own as paintings are dual lands, and they would be astronomical in price if in a public sale, even the unplayed ones. Let's take them off the table for clear reasons.

While Ponder is played often, and Tedin's Lorwyn art would be a spicy auction, there isn't a Ponder deck. Instead, you have to dive into archetypes and find out why they're strong. Every Delver of Secrets build struggles here because it's a digital card and omitted, just like Deathrite Shaman and Young Pyromancer. People may get a reprinted card one day and they may love it, but the mystique of being the first printed card, that iconic nostalgia, drives prices into the tens of thousands no matter the time it emerges.

And then there's Snapcaster Mage. 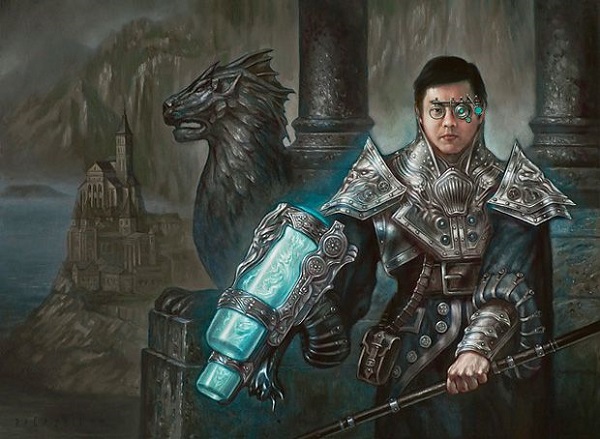 Whenever that card hits the market, which it eventually will, it will be the most expensive card artwork below the Vintage staples, the power cards, the dual lands and the like that get investment level bids. I look forward to the day it's eventually donated to a museum, which it will be in time.

Death and Taxes is made viable by Aether Vial, which Greg Hildebrandt has the original, with Raoul Vitale's also being highly popular for blinged out reasons. Both would fetch quite high values like Arcbound Ravager because of this deck, but also because of Merfolk archetypes. Big crossover decks only add more art bidders!

Burn means Lightning Bolt for this study, and the rest are secondary in comparison. Moving on.

Maverick has so many options, but we're talking about Swords to Plowshares and Mother of Runes most often. Both find themselves in a variety of decks, similar to Aether Vial.

Miracles was a deck, making Sensei's Divining Top and Counterbalance options for an original painting to hit the high threshold of pricing, but with Top being banned, it's akin to Hypergenesis, a former strong deck. (And an artwork I used to own.) It doesn't have the ongoing community presence. Were Miracles to have an unban, these artworks would rise to prominence in terms of art collector viability again.

Lands are an interesting choice, with all Tabernacle varieties being more based on Rishadan Port vs. Crop Rotation, a card played in Legacy infect. When offers of $65,000 were made public and they were turned down, the sale was made in private and the final total was not made public at all, whether it was all cash, all paid up front, or a mix of cash and trade was accepted for it. What we do know is that it's with a private collector and definitely surpassed Arcbound Ravager. 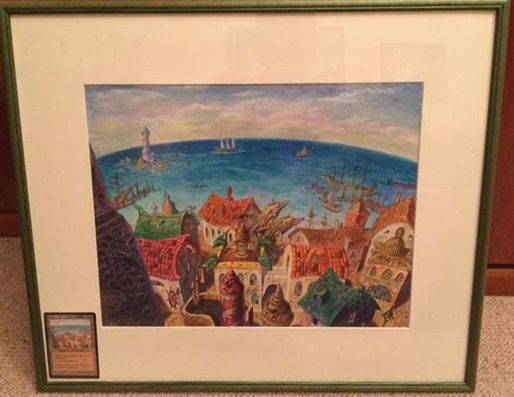 Storm has a few choices in Lion's Eye Diamond (Dredge's #2 card art to own), Lotus Petal, Tendrils of Agony, and Empty the Warrens. Sure, Cabal Ritual, Infernal Tutor, and Cabal Therapy are popular, but they aren't the cornerstones of the deck. Were the Mirage Lion's Eye Diamond to change hands again, it would be sold at a ridiculous level, despite there being two versions, both traditional paintings.

As for Modern, Standard, and Commander, there just hasn't been enough time to get two interested bidders, with the funds available to start a bidding war for a painting. While cards like Noble Hierarch are multi-format all-stars and could rival a Sphere of Resistance and the like, they aren't as fundamental to a singular deck, or the crux of a few decks.

Having said that about the commander format, I'm also the idiot that sold Doubling Season's original painting. There are Commanders who may rival in the future, our near $50K little robot but not yet they won't.

Let's return to this soon. Art will hit $50,000 in a public auction soon. I'm not sure what painting it will be, but it will happen in the next year. I can't wait for it. Try to buy it in a private auction before that happens, you might save a few dollars.