Today we have a very special guest, someone who is both an art director for Wizards of the Coast on the Magic: The Gathering tabletop team, and a Magic artist, most recently for the Secret Lair Ornithological Studies, Ovidio Cartagena.

As the Secret Lair Summer Superdrop are hitting homes, it's the perfect time to hear from him! 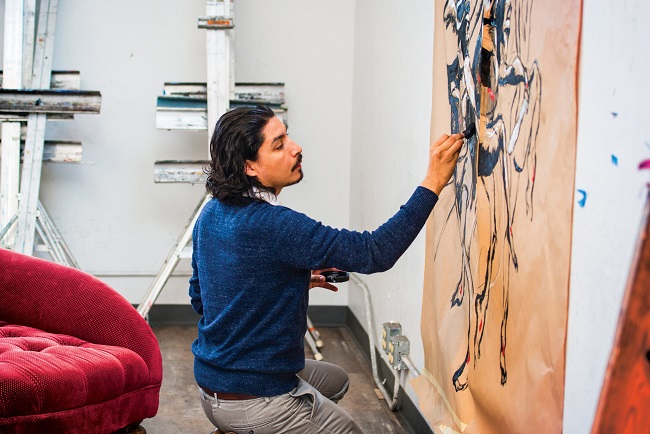 M: Ok, so who is this Ovidio, what's his deal, can you give us some background on you?

O: I'm, for the most part, a traditional artist with most of my practice in fine art.

I was born in Guatemala, where I trained as a graphic designer and a classical guitarist and also had some fine art shows there. I studied Classical Painting in the Aristides Atelier in Seattle. I focused my artistic practice on Guatemalan objects and traditions, using part of my personal collection of Mayan artifacts as inspiration and reference. 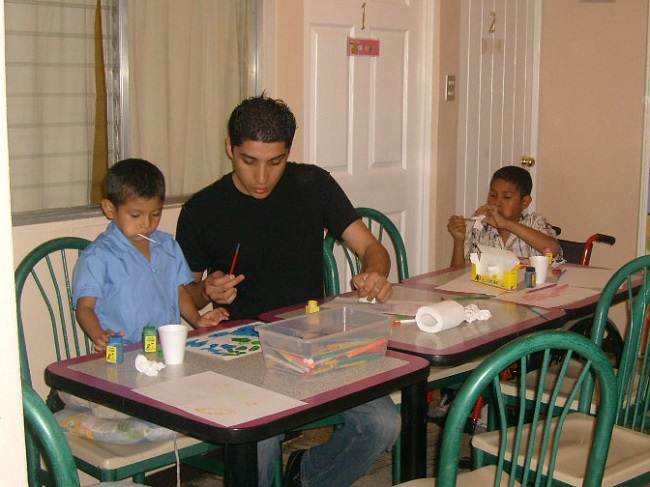 O: I've done service and art-related work for non-profits both in Guatemala and in the Seattle area, which has been very fulfilling work to touch people's lives and give others some of the inspiration I've been lucky in life to have.

M: When did you start noticing Magic? Start playing?

O: I started playing Magic: The Gathering in when I was an elementary school teacher, because some of my 5th grade students were big fans of the game, and wanted to teach me how to play. I was very much impressed by the art in the cards, especially an 8th edition Swamp by Dan Frazier. I really became a more avid player when I moved to Las Vegas, now I could finally afford the hobby! This was around Theros Era, which I loved because of the introduction of Gods. Plus, I'm a huge classical art nut, so the Greek-inspired theme art went a long way.

M: What is your favorite card art? Everyone has one!

O: One of the most interesting experiences I've had with an artwork was Warden of Evos Isle by Nils Hamm. It has a mysterious, dreamy atmosphere that was so moody and oneiric I had a dream one night that I was INSIDE the card art. Not a lot of games or art pieces have done that to me, but it was really cool. Needless to say, that made me love the game and the art even more! I didn't know I would be commissioning cards for Magic: The Gathering just a few years out. 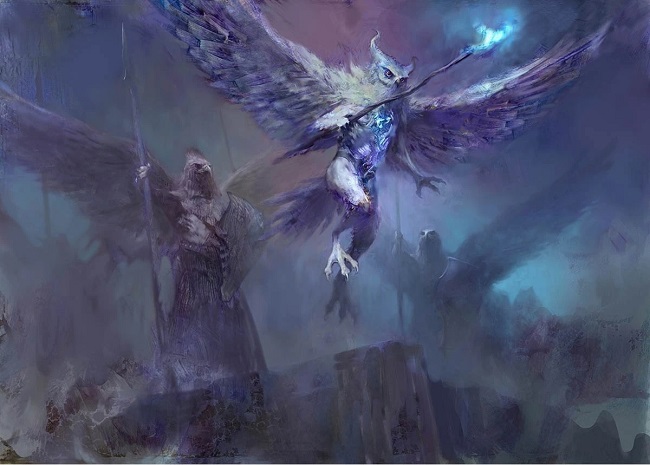 There have always been marketing art directors and card commissioning art directors. The community knows that. Folks like Cynthia Sheppard and formerly Jeremy Jarvis work on making card artworks with commissioned illustrations. You're an art director primarily on cards now, what was your first project?

O: My first big project was the art direction for the Godzilla cards in Ikoria. Bringing legendary kaiju to Magic: The Gathering was an interesting task. I was honored as a big fan of Godzilla and MTG. I loved the results, each of those artworks was stunning and grand in a way we've haven't quite seen. I wanted to capture the awe one would feel at seeing such a force of nature like Godzilla, Mothra, or King Ghidorah.

M: Got it. And you also make art, for Wizards. That's unreal! I might've heard though, that the Secret Lair wasn't your first...

O: Fun fact: the first Mystery Booster card ever opened has my art on it; it was Golgari Death Swarm. It started as a tiny ink doodle, but I overworked it and made it into a homage to one of Goya's engravings. Francisco de Goya is one of my favorite artists.

The first mtg card I illustrated was when all the #WOTCstaff did tiny doodles for cards on #mysterybooster. Mine was Golgari Death Swarm and I did a #Goya homage. No one has caught it lol #MagicTheGathering #ink #horror pic.twitter.com/d0Xk3Oeuz8

For Birds of Paradise and Dovescape, the art director was Tom Jenkot. I had already done some bird illustrations, and because of my background in classical painting he thought I would be a good fit for the Ornithological Studies Secret Lair Drop. You can see my sketches for Dovescape: 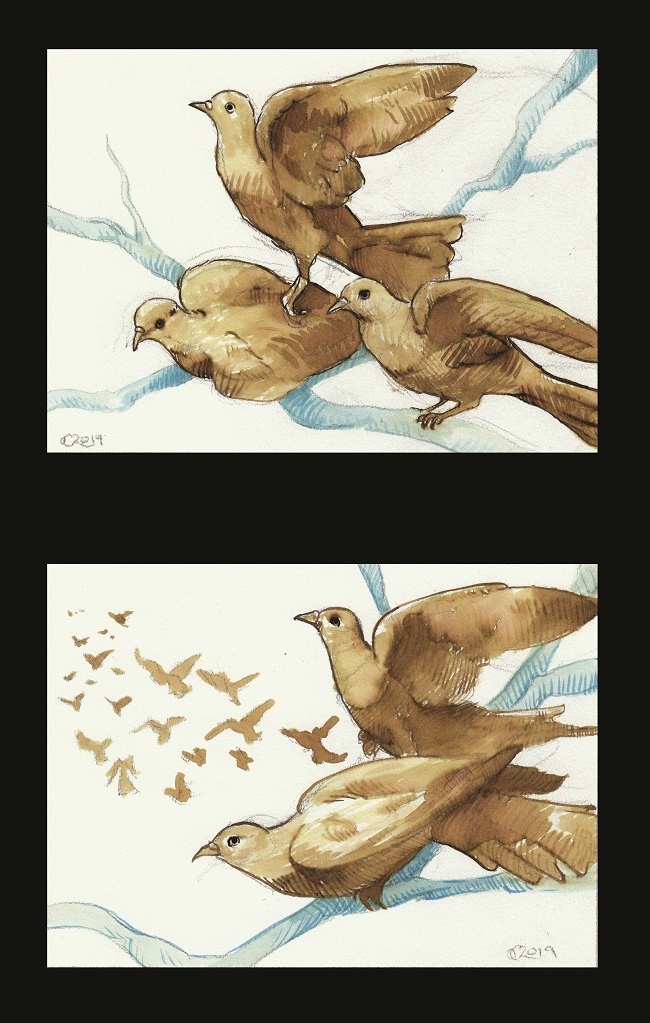 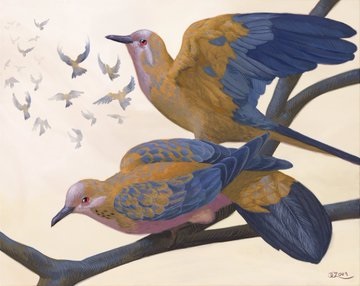 I recall you mentioned Birds of Paradise is more than just an artwork for you. Can you please elaborate for our readers?

O: Birds of Paradise was a very meaningful illustration for me, for several reasons. I wanted it to be inspired by the national bird of my country, the resplendent quetzal. 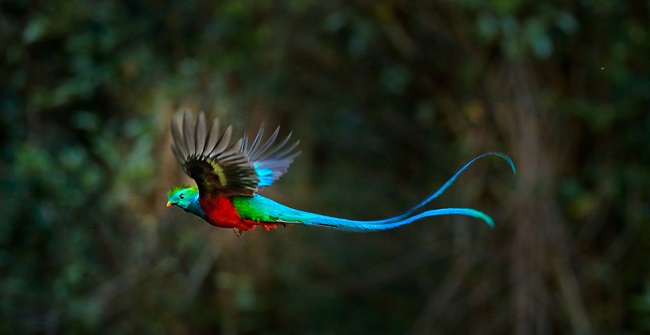 O: This bird has a tail so long when it flies it flutters and it's almost as if you're seeing a snake flying! Also, bright colored birds are a very common feature where I grew up, so I had a clear idea of how a Bird of Paradise would look. I chose to draw a bird that would look regal, proud and even uncannily intelligent.

This was the first time I did a piece with gouache, thinking gouache would give it that "classical bestiary" look. It was easier to come up with about 6 ink sketches, of which I sent 3 to Tom for selection.

O: It was very hard to paint the actual picture because of my lack of experience with the medium (gouache on panel), and I kept reworking areas to highlight the color and accentuate the feather details: this is something the Audubon illustrations are very good at, because they fulfill not only the objective of having a beautiful bird but also to explain the species and its behavior. So, I had to live up to the Audubon reference, the quetzal inspiration and illustrating a beloved classic MTG card, a staple of ramp decks everywhere... no pressure! 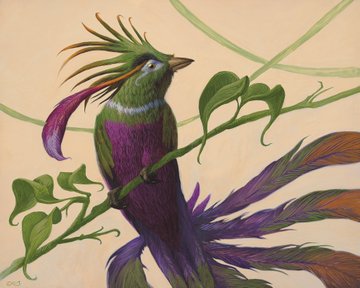 Birds of Paradise by Ovidio Cartagena

O: I was happy the art was well received, but mostly just glad that I got the opportunity to give my take on it. Also, Magic: The Gathering has a lot more fans now in Guatemala!

M: I am sure they have your art already on the walls of local game shops there. No question!

Speaking of fostering a deeper connection with art, how has making art yourself allowed you to be a better art director?

O: Being an artist definitely helps as an art director, because I get to relate to the people I work with. I can also be more in tune with their ambitions as artists as well as what a card needs to look great. I have been lucky to work with people who love Magic, and we all want to make art that excites players and attracts new people to the game.

Thank you Ovidio. Let us hope we see more of your art soon.

Enjoy the birds in your superdrop!