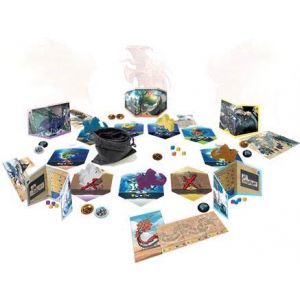 In a galaxy far far away, there is a planetary system composed of a great big sun and nine minor planets, four of which have been developed as mercantile planets more or less under the control of politicians and guilds. On each of these planets are a merchant guild, a guild of smugglers, a bazaar and the galactic government, and players can take special actions on each of these planets.

In RYŪ, a game of negotiation, bluffing and dice-drafting, players each represent one of the other five planets in this star system, with each planet having a different type of humanoid - such as sharks, amazons and meka goblins - and its own unique influences. These planets are open to prospecting, and with the proper financing players will be able to dig the resources they need to build their own RYŪ, a mother ship composed of "Rare Metal", "Memory Stone", and "Amber Magic". Players will need to cooperate with one another to raise the necessary resources, but they must also work for themselves in order to maintain an advantage over other players. Once assembled, the RYŪ comes to life as a living spaceship, and its owner wins the game.
Category:
Strategy Games
Sub Category:
Mechanics:
Auction
Ages:
13+
Players:
2 - 5
Designer:
Kim Sato
Publisher:
Asmodee Editions
SKU:
ASMRYU01
Contents: