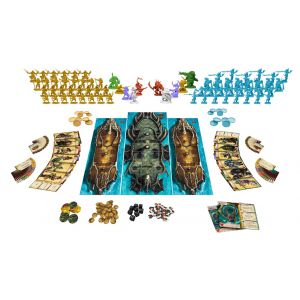 Rum & Bones: Second Tide is the exciting sequel to Rum & Bones that introduces a dynamic, new leveling system, revamped gameplay, and new Heroes. In it, players control the Heroes, Bo-suns, and Deckhands of the monstrous crew of the Deep Lords or the sea-hardened humans of Marea de la Muerte, all represented by high-qua-lity miniatures.

Players direct their forces to board the enemy's ship and destroy objectives for points. However, they best beware of the Kraken! With a good plan and little bit of sailors' luck, they might be able to defeat their opponents and sail off with the pirate booty!

* Mini (and many) Pirates - With 70 beautiful, highly-detailed pirate miniatures, battles will take on a new level of realism.