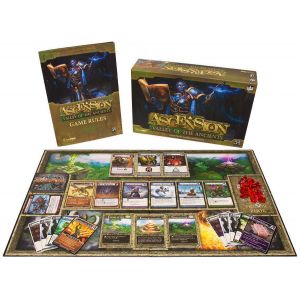 Ascension: Valley of the Ancients

Unlock the Power of the Ancients!

Ascension is a deck-building game in which players spend Runes to acquire more powerful cards for their deck. It offers a dynamic play experience where players have to react and adjust their strategy accordingly. Each player starts with a small deck of cards, and uses those cards to acquire more and better cards for their deck, with the goal of earning the most Honor Points by gaining cards and defeating monsters.

In Ascension: Valley of the Ancients, players compete with one another to maintain control over powerful temple cards. Players can control three different temples: the Temple of Life, the Temple of Death, and the ultimate Temple of Immortality. Players race to collect keystones, which aid them in their quest to acquire temples or steal them from their opponents!