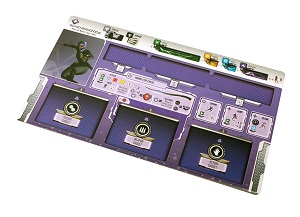 MAYHEM's Firing Squard is your go-to strike team for mystery, murder, and mix tapes. Kingpin is a talented triple-threat who can shoot, dance, AND sing. The enigmatic Scheherazade fights with blades and her bizarre mastery of space and time. Oni, a former Yakuza hitman, is a one-man army of terror and vengeance.

Meet the members of MAYHEM's Firing Squad: Kingpin is no slouch when it comes to uniting people for a common cause, known for uniting the gangs of Stilwater and expeling LEGION forces from the city when they attacked. Oni, once a hitman for the Yakuza, turned against his family when he discovered the Boss took orders from LEGION. He's more than a match for Yakuza forces, and more than a match for LEGION. Scheherezade has told so many stories and lies about her past that no one knows what's true for sure. All they know is she's a master assassin and excellent at keeping secrets!

The Firing Squad Expansion for Agents of Mayhem - Pride of Babylon contains the Figures, Character Boards, and Upgrades for the three members of MAYHEM's Firing Squad. Vary your strategy and take on LEGION with this new, powerful force!

LEGION won't know what hit them when you attack with the fierce forces of the Firing Squad Expansion for Agents of Mayhem - Pride of Babylon. Order your copy today!