Coming off an exceptionally poor effort in alteringâone after which, upon seeing the finished result, my girlfriend politely suggested that I slip $20 in the envelope with the cards as a form of apologyâI was sure that my altering days were over. All one would have to see was the blue marker covering what was formerly a functional Stasis in order to deem me unfit to alter cards or touch a Sharpie marker again.

A guy read my alter article and decided he wanted in on all the hot, drunken action. Guess which card he wanted me to make utterly worthless.

He was talking about Karn Liberated, not the other dude, Karn, Silver Golem. Mint ones are $14.99 on CoolStuffInc.com. Not a super-expensive card, but definitely multiple thousands of times the value of any other card Iâd ever drawn on previously. Itâs also worth noting that Karn Liberated might actually be worth more than $14.99, but CoolStuffInc.com strives to give all their valued customers great deals! Whether youâre in the market for a cool new planeswalker or some new sleeves and deck boxes: CoolStuffInc.com! For all your Magic: The Gathering needs!

We exchanged e-mails, I asked him multiple times if he was sure he knew what he was doing, he assured me he was, and he even passed my litmus test (Q: What is your name?), so I gave him my blessing to ship me a Karn Liberated, with the understanding that I was to send it back to him totally defaced.

This gave me pause. Maybe I am an unappreciated genius, after all. Maybe Iâm just destined to go unappreciated in my own time, like President Bush (either one works), or that new show, The Playboy Club.

I got the Karn Liberated in the mail about the same time classes started, so I hadnât gotten a chance to work on any of them until Yom Kippur came around. Getting drunk and drawing on Magic cards is the traditional way of celebrating Yom Kippur, right? 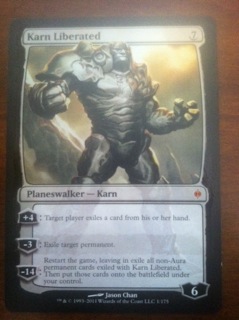 I got started on the Karn Liberated by making the black border a little bigger. I still have no idea why anyone does this, but I saw it on a bunch of Jeremy Froggatt alters from a long time ago, and it still seems like the thing to do. 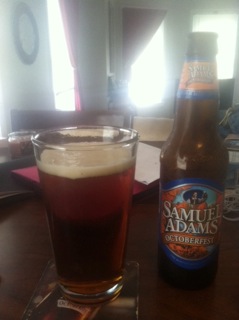 Whenever Iâm creating alters, I always gotta bring some brews, because altering Magic cards without alcohol involved is like Title IX or votingâitâs pointless and just a waste of time. Iâd like to consider myself somewhat of a beer snob, but thatâs just not true. Iâm a beer slut. If itâs carbonated and contains alcohol, itâs going down my gullet. Iâm certainly not above Sam Adams, and their Oktoberfest just so happens to be my second-favorite beer of all time. It was my favorite beer, but then I had some Allagash Curieux while I was in Philadelphia for the Pro Tour, and it changed my life. They age that shit in bourbon barrels. You donât drink it; it makes sweet, passionate, candlelit love to your mouth and throat. 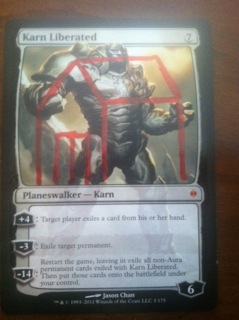 I figured that for this alter, Iâd draw a barn on it, because barn rhymes with Karn, and I lack imagination. In case you were curious, the sinking feeling you get when you deface $15 that doesnât belong to you set in while I was drawing the outline of a barn on a Karn Liberated. 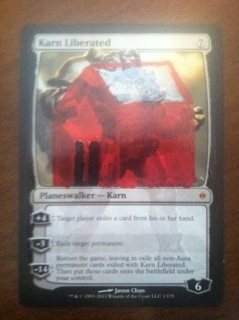 Okay, I have no idea what the fuck that could possibly be. Is it a barn? Is it a church? Is it a depiction of a ghost lying on top of a church, drawn by a four-year-old? I hate this. 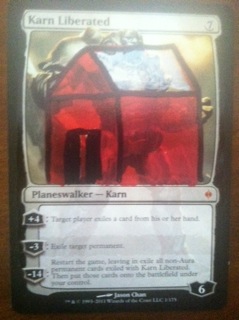 At this point, I thought it would be prudent to do some black outlines, so that maybe you could trick someone into thinking that maybe that red-and-white blob covering up Karn is actually a barn. I also very much like the effect of Karn peeking over the barn ever so slightly, like heâs playing a really serious version of hide-and-seek. 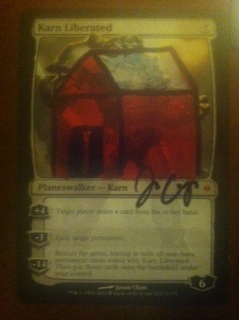 For the finishing touches, I signed it. Because who doesnât want a Limited-Edition Jon CorporaâSigned Alter to show all their friends, right?

I am a horrible person.

So Craw Wurm. The art really reminded me of that stupid fucking nightmare-fueled creature from The NeverEnding Story:

Guh. That is awful. 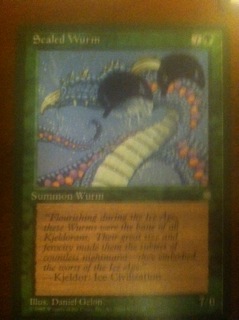 I hate this already. I started with the eyes, because thatâs how Iâve drawn things since I was in fourth grade. Start with the eyes; work your way out. I think thatâs how the guy from Pappyland did it, too. Anyway, those eyes are really creepy, and Iâm glad this isnât staying in my apartment, because Iâm pretty sure it would wake up in the middle of the night and eat my cat. 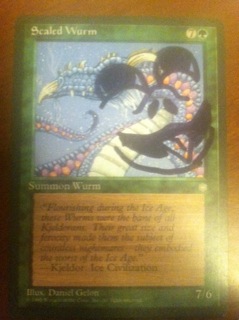 Hoo, boy. This must be like what staying in an Italian flat with Amanda Knox must be like. Iâm never getting to sleep tonight. 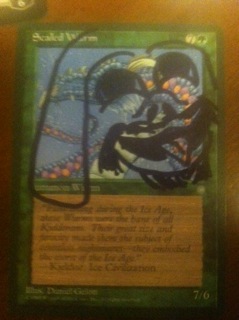 I showed it to my girlfriend Emily. The following dialogue ensued:

âWhat is that supposed to be?â

âThatâs the dog from NeverEnding Story.â

âOh my God. Have you ever even seen NeverEnding Story?â

âHow much is that card worth, Jon?â

âOkay. Wait, doesnât the dog from NeverEnding Story have eyelashes?â 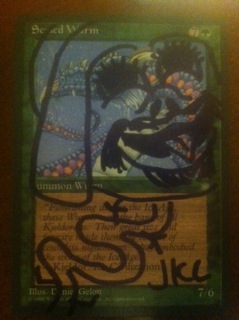 Yes, it does! Also, whose idea was it to give that dog a Fu Manchu mustache? Is that really necessary? Oh, and I initialed it because Iâm going to be famous someday (soon), and I wanted to throw my boy Tom a solid, âYou are welcome, brochief.â

Oh, you wanted to read about FNM?

Hereâs the deck I ran:

My most notable loss was actually my Round 1 opponent. We got a little pre-game banter going, and he told me that he had only been playing Magic for three or four weeks, and that this was his first FNM. The guy next to us looked at my opponentâs deck as he shuffled and saw Overgrown Battlements. My opponent said, âOh, is Zendikar illegal tonight?â and then pulled another deck from his bag and started shuffling that one instead.

He and his Dungrove Elders swept me with thirty-five minutes left in the round.

It was definitely one of the weirder FNMs Iâve ever been to; out of eighteen people, ten of them dropped, so I made Top 8 and got a pack for my trouble. I also got the bye twice, if that makes any sense (it doesnât).

My advice: Donât play that deck. Itâs really, really bad. I lost more than one game in which I stole Gideon Jura with Master Thief. You donât want any part of this.