He has been one of my favorite legendary dorks for a long, long, long time. He's unique. He rides a Wolf to work. What's not to love? Sure he might cost six mana... but who cares.

New Tolsimir is cheaper and can bring his Wolf Friend on arrival, rather than by tapping. However, while he'll love Wolves arriving to the battlefield, the first one would pump them and others.

Both are great, and I really want to build an EDH Wolf deck around them.

But that ain't all.

Hello Arlinn, Voice of the Pack! I hope that you are having an awesomely Wolf-y day today. Wolfs are fun and great and awesome in equal measure. Arlinn has another form too:

Her flip-walker from the plane of Innistrad. Now, I may be shipping a bit, but wouldn't they make a great couple? They both were on Ravnica during the War event. She's a Wolf Woman Walker of Planes and he's a Friend to Wolves. He's one person who likely won't judge her other side. Plus, Ravnica and Innistrad are the only two planes with an Eastern European flavor, so they even have that in common.

Here's what I want to do. I want to build a deck where Arlinn and Tolsimir have partner for each other. Now, I want to combine the Gruul of Innstrad with the Selesnya of Ravnica and use her old version. But a five ability planeswalker may get pushback as an illegal leader, especially when twinned with Tolsimir illegally as well.

Now, for this deck, I also want to limit myself to only using these cards:

For example, take Birthing Pod. Can you see that Phyrexian world magic as Wolf magic? Of course not! I'm also going to steer clear of equipment that makes no sense either, as well as non-basic lands that don't tap for mana. No Reliquary Tower or Rogue's Passage here! Or even things like Sol Ring. Go away!

Also, no cards that have a generic tribal flavor, like Heirloom Blade that make no sense in a Wolf deck.

Let's get started with a few 3-drops that can be easily dropped and add some nice theming. I love Spirit of the Hunt flashing around the area. It has a great and powerful effect to pump up defenses by surprise and helps a lot. Meanwhile your Silverfur Partisan will begin to pump out some little doggies when you mess with its friends. It's another fun theme for your deck!

Want some Huntmasters? Of course you do! All three of these join Silverfur Partisan in their making of the precious Wolf. Master of the Hunt and Wren's Run Packmaster will both make as many dorks as you wish to invest mana. Get your Wolves on! Master of the Wild Hunt however makes one for free each of your turns, and can tap and kill something really, really, really large (in this build).

I know that you want to ride some Wolves like Tolsimir with that cool Saddle. It's a piece of equipment that's both on theme and pretty cool. It makes a Wolf Friend for you as well! While on the note of artifacts on theme, did you note that Selesnya Keyrune turns into a Wolf?

Flashing Wolves are great with new Tolsimir as you can fight on arrival, so you have a lot of instant removal with them. Nightpack Ambusher is also awesome due to its 4/4 body that can also make more Wolves and pumps your team as well all nice like!

Now on to some fun flavored gumdrops for y'all.

Wolfcaller's Howl is wolf-calling awesome! If you don't like free Wolfs in London then I'm not sure why you are still reading this article. It's all about that Wolf!

We also have a few Wolf-themed Auras. My favorite is probably Raised by Wolves, which makes two Wolfs on arrival and pumps up the enchanted one massively. Imagine that on Tolsimir! Now we know where the title "Wolfblood" comes from! It's always going to be at least six power, and it could be loads and loads more! Mantle of the Wolf is a solid addition to the build as you get eight power from your Aura. Now it's locked in, so it can't get better. For four mana? That is not bad at all, my Wolf People!

Let's review some other cards, like Howl of the Night Pack or Moonlight Hunt that add fun options to your howling build! The flash Glorious Anthem of Howlpack Resurgence makes it a fun combat trick as well as a valuable Anthem effect.

After my initial run of Wolves and Friends, I have 24 dorks, 1 'walker, 5 sorceries/instants, 2 artifacts, and 6 enchantments. That's a total of 38 cards already, but I scraped the barrel of creatures.

Now for some cards on theme!

Nothing says "Wolf" more than Tooth and Nail. It's great and fun, especially in a build that cares this much about a tribal creature type. The Sword of Body and Mind is my next addition. It'll probably be my last equipment addition as it does make those Wolves! 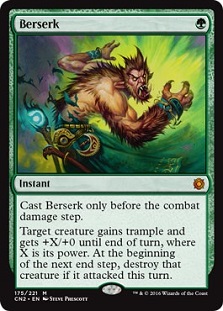 Berserk is also very, very Wolfish. Look at that art! The idea of going all smash-crazy enough to die also feels like a Wolf mechanic. For the pack! You can use it as someone attacks a foe with their leader and net a surprise Commander kill out of nowhere, or kill an opposing dork that swing as well. Enjoy it!

Here we have some removal effects. Now again I won't be running Generous Gift or anything out there. But these work fine and are on theme too boot! Stomp and Howl like a good Wolf!

Here we cards themed on things like Hunting and Packs, both themes of Wolf living. Hunter's Insight screams Wolf with its art and also adds some on-theme drawing of cards. Gather the Pack can also help with that as it can keep up the card flowing action!

Wild Pair and Call of the Wild are also two fun and thematic additions to your deck! This is particularly true of the latter where you have the literal name of a Jack London book that stars a housedog, Buck, who becomes more and more feral as the book progresses. With a huge density of creatures in the deck, you have a good shot of getting a free dork onto the battlefield from your library.

Note that Wild Pair is also great long-term value as you churn out many new dorks from the library out there in the battlefield. Ready for double dorks? I hope so!

I dug deep into the Wolf theme, but I came up short of an actual deck, even using cards like Howling Giant and Mayor of Avabruck and weaker Wolf cards too like Wolf Pack and the vanilla Watchwolf.

Given that my deck just wasn't able to get up to an actual deck size, I had three options:

I chose #2. Look, I am not abusing the fact that I have a pretty cool illegal planeswalker. There's no Doubling Season or proliferate, and there still wouldn't be key cards for a three-color deck like Command Tower or Arcane Signet. Why are my Wolves in towers?

I audibled late into Naya

And that gave me these cool cards:

Who wants more Lords and Lands? Me! 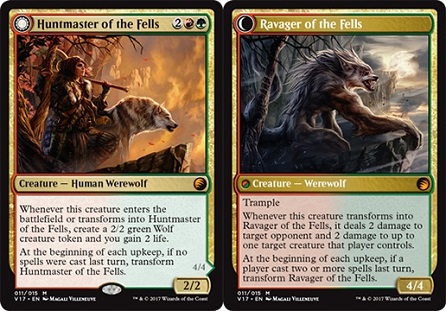 I like to call it Huntmaster of the FEELs because it makes you feel happy when on the battlefield. The strong arrival and transform triggers can layer serious value over time. It makes those sweet, sweet Wolf tokens and also can Shock for damage or grab you some life.

As does Ulrich of the Krallenhorde. And just like Arlinn has her Wolf and Tolsimir has Voja, Ulrich has his Kindred which have some useful abilities to help out the team too.

I also added in the Geier Reach Bandit. His 3/2 haste body swings fast, and his Alpha form really helps the team keep their best selves out there as I can transform a Werewolf immediately on arrival. That gives Ulrich both his ETB ability and his transform ability back to back, which gives you a 10/10 fighting Werewolf!

I know it's not much burn and dorks that kill on arrival, normally you'd run something like FlametongueKavu in the four spot. But any Wolf on Fire ina storm, right? Right!

For my last few cards I chose those that could be flavored Wolf. Cultivate? Kodama's Reach? Nope! Collective Voyage? Of course, the pack travels together! Omen of the Hunt? They are hunters! That sort of thing.

And there you are! I don't think this deck abuses the partner overly much as everything must be on theme. I hope you enjoy it , and have a great day!