I hope that your day is most pleasant and you're experiencing fun and accomplishment in equal measure.

A month ago, I still needed 13 cards to finish Abedraft, and now... I'm done!

What's Abedraft, you ask? Let's back up and talk about this journey!

Our journey begins as dawn breaks over the West Virginia capital of Charleston in 1997 and Winter Break's frosty embrace had arrived. I was playing at the local game store almost daily, and I was joined by other students, and locals. One of the folks in the local scene had created an unusual draft experience around packs that combined cards from various sets. You would pay the same money, and get the same pack distribution of 11:3:1. We enjoyed it.

Many of us were inspired to create our own formats. I remember one of us having way too many beefy Green dorks and Red burn, particularly Rolling Thunder. I nicknamed his draft YART as every pack had "Yet Another Rolling Thunder." I created my own, and it was warmly received by everyone as well balanced. Inspiration struck.

I turned to create a big box of draft-able cards I called Abedraft. As new sets came in, I would push to add in new cards, and you could stir and pull out the card, and it felt and played awesomely.

One common variant, an auction, was so popular in Charleston that they called the auction, "Abedraft" even though that was the name of the box of cards.

I even published my first (of more than a thousand) article on it back in 2001, as well as a sequel a few weeks later.

But then I found a new fascination....

Almost a year had passed since I started AbeDraft'ing my articles. And then Ben Bleiweiss arrived on the scene in this article.

He goes over a large big box (sound familiar) with... every card in the game! WOW!

In the article he went over what he had to do in order to get some of the more expensive and iconic cards, as well as other places here and there. Ben has a few rules too for his Big Box:

And that's it. Take Naturalize. Ben has one Naturalize in his set. I have eight copies, one for each expansion set from Onslaught through Rivals of Ixalan. But I only have one copy of Lightning Bolt as it was never in an expansion set. I have two Swords to Plowshares for Ice Age and the original, but not Conspiracy. Also note that I have the copy needed from that expansion. I don't just have two STPs, I have one each from Ice Age and earlier (Revised if I recall correctly).

I had a new goal in sight, and it was big.

In order to track the cards needed for my Abedraft, I had an excel spreadsheet I created called, unoriginally, "Cards Needed". Each time a new set was released, I would crack boxes, and purchase singles of everything from planeswalker sets to more.

Over the years, my numbers grew smaller and smaller, but this always felt like a long term goal. Some years I might only get one or two cards beyond keeping current, as prices spiked. The reserve list spike a few years ago hit my collecting hard, and it became much harder to knock out the last few cards.

Let me give you an example:

As of December 2014, you can see, I still needed 30 cards for Abedraft, but they were pricier. Over the last few years I might save up around $1,000 of store credit for a key dork like Juzam Djinn or a spell like Chains of Mephistopheles. I might get one or two deep.

Then January dawned, and I took another look at my Cards needed list:

Just 14 cards. But they are very, very pricey!

Now I run the Power Nine in Abe's Deck of Happiness and Joy, and I own them.

I own an Italian copy of Tabernacle. Buying an English one right now would be $1,500 easy, and drop at least one third of that for an Italian copy of the same condition. How committed am I to that English rule? Could I make a single exception?

I did and I pulled the Tabernacle off my list. And then I committed. I went out and picked up the other cards, and they just arrived... 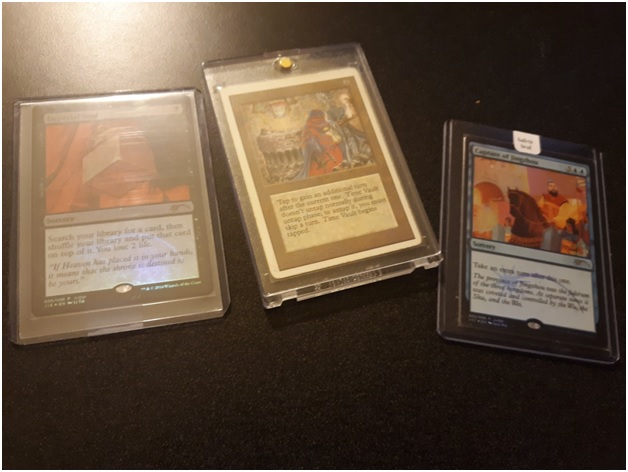 Here they are! Time Vault, Imperial Seal, Capture, all for around $900 total.

And then that left me the Power 9, which I took out of Abe's Deck of Happiness and Joy.... 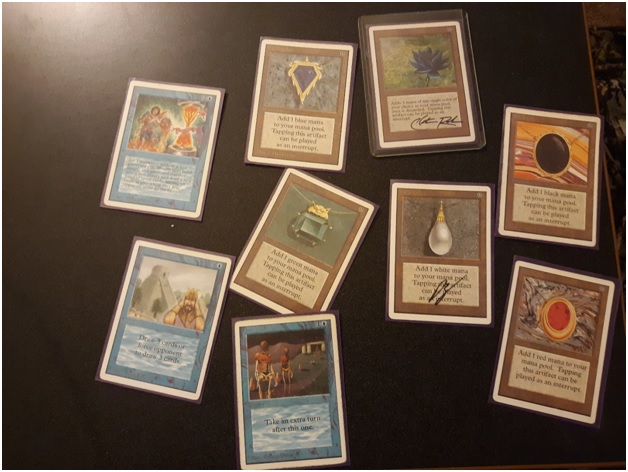 I loved them there! But this project needed to conclude.

I also made another change. I keep a copy of the expensive MTG cards next to the draft, such as Moat. I have a proxy of Moat and then when you flip over the Moat, I hand the card over protected. You can use the proxy. Also, unlike Ben's Big Box, I ask that everyone use the sleeves that come with Abedraft to sleeve up.

Now we are finished! There are a few ways to draft Abedraft. My favorite is to use the commonalities to give you a traditional booster pack of 11 commons, 3 uncommons, and 1 rare or mythic. This will give you a number of more reliable commons, and booster packs that feel more organic. It's my preferred method.

Some folks prefer a more chaotic draft, and we do 5 rares/mythics, 5 commons, and 5 uncommons for packs instead. Those have been more popular recently as the people I play with really want to push themselves into crazy town for their drafts. You can get more bombs and more craziness, but rares can also be pretty lousy for folks, and thus are placed at rares because they are bad in draft, so you can have more hits and misses.

The format can be pretty random, but the key archetypes of the colors remain. I'll show you some packs below. 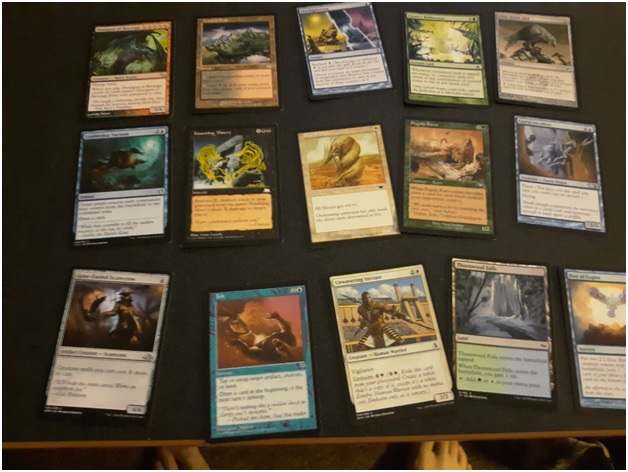 Here is my 11/3/1 we talked about earlier, and this is my preferred method of drafting. Rares are rare, and commons are common. You can still see a number of cards in their colors. Blue has flying, Black has graveyard caring, green mana making, and more. We have a Sliver, and a few cards there.

For this pack, I would lean toward Faerie Invaders, which is pretty good. I like forcing Rakdos, Orzhov, or Boros, as those will tend to have enough removal to really help. However, if I am trying to force Rakdos, the rare Demigod of Revenge ain't bad either. Plus, Tainted Peak is a likely wheel. We also have a Sliver, a Glint Hawk Idol which is solid, and a few more cards. Don't sleep on Thornwood Falls and a Simic build as there are a number of quality cards in here in that color combo, like Jolt, Rise of Eagles, or Dawn's Reflection. You'll also note the bad-flip of a unplayable Leadership Vacuum. Happens. 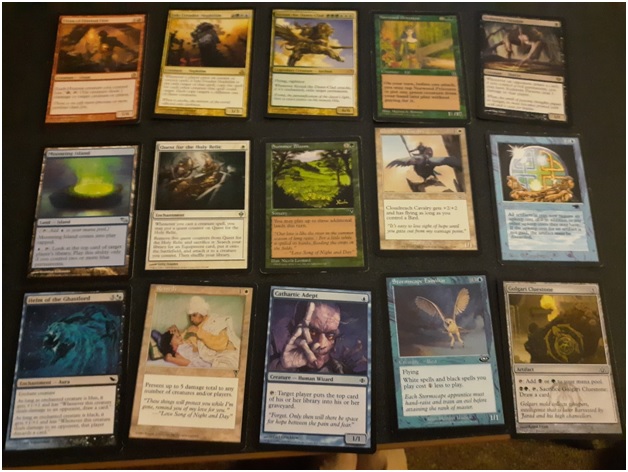 Here's the chaotic 5/5/5 split we discussed above. The rares include Norwood Priestess and Krond the Dawn-Clad. Without any major removal spells, my top choice in a vacuum is likely Cloudreach Cavalry hoping to get the Stormscape Familiar on the wheel (it might normally go around then, but that's unlikely in this pack as Blue has weaker Energy Flux). If this were my first pack, Kederekt Parasite is solid and Titan of Eternal Fire beefy. We have 7 dorks but it feels dork-like as many of these, like Ink-Treader Nephilim are pretty unlikely to be played. You can see the benefit and costs of a 5/5/5 right there.

Now, to be fair, there are a handful of recent cards in 2019 and 2020 I haven't gotten yet, such as Uro, Titan of Nature's Wrath, Brazen Borrower, and Wrenn and Six, but I will! It's easy to get the new stuff. But the task's difficulty has been completed, and we are approaching the finish line! It will remain an ongoing task as new sets are released, but we are getting there! Ready?

I hope that you are inspired to begin your own XDraft (where X is your name). Thanks for reading, and have a good one!!!

P.S. - Want to see how my Huntington's Disease has affected my mind over the last 7 years?