Hello folks! I hope that your day is delightful, and your week has been productive.

We have a ton of cards that are eligible for running in Commander. Countless (almost 20,000 according to Gatherer) cards are available. Where do you start? Great question...

How about a random card?

If you head over to Gatherer's "random card" function, you can hit any random card. Keep going until you find a legal Commander to start a build; you've got this! It'll be fun. You could get anything from Nicol Bolas to Klothys, God of Destiny and anything in between.

Today I am going to do just that, and we'll play it in real time. What will I grab?

I'll take the first legal Commander that follows these rules:

Are you ready? Let's get started! 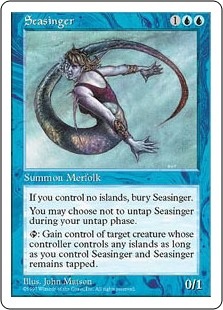 My first card in the Fifth Edition take on Seasinger, originally printed in Fallen Empires. It was one of the most played cards there. I recently hit it for a random Top Ten at #2. It was a heavily played and iconic card during its day!

All right, ready for my next cards?

I am not going to finish the project and find a legal Commander.

I'm building around the Seasinger instead!

I have a cool idea.

Now there are a few ways I could lean into with Seasinger in Mono-Blue:

Teferi, Temporal Archmage is great as you can untap the Seasinger. You could also use the deep Blue Wizard loving Azami, Lady of Scrolls. Even a generic Thassa, God of the Sea or similar build may present itself. But nope! I'm leaning older school than that.

However, the obvious choice is to go Mono-Blue Merfolk and run Kopala, Warden of Waves. Kopala will protect your team of Merfolk and help keep them going! And Lord of Atlantis comes from the very first set, and you can't get older than Merfolk tribal!

If you want protection but from another non-tribal direction, Kira, Great Glass-Spinner may evoke itself.

But I am going to the same set, and same card for inspiration, just to a different place...

Here is Lord of Atlantis. As you can see, he's a fun, cheap, powerful leader that can pump your folks up if they are Merfolk as well as give them evasion.

That latter part is my inspiration. Phantasmal Terrain. Giving your foes Islands so you can swing at them was often a card in early Merfolk decks.

What if we just gave me a leader that already has it?

My deck is one that cares about your foes having Islands. (And you too)

Bribery and other Acquire-style effects are heading in. As you may have noticed our leader is a Rogue. Therefore, you could easily do this in the first few turns:

I love how powerful this is! I've tossed in Notorious Throng as well, but most of the good prowl cards are in Black and thus aren't Thada Adel-able.

I also tossed in these:

This deck lives off of Thada Adel's combat trigger. Slipping in two hits with double strike or using the Resonator are both keys to pushing the game into your place. Note that you cannot use the Fireshrieker on the turn after Thada Adel barring mana ramping of a mana-rock or something, but you can drop and activate the Resonator.

Helm of the Host is a more expensive take on that. Equip Thada. At the beginning of combat, you get a free one with one extra set of triggers to use.

Who wants some artifacts to help the team? Quicksilver Fountain is a one card way to increase both your Islands as well as others. You can slowly build up opposing islands to swing into or to use to steal from with the Seasinger. Note that you can also increase your Island count which will help your Vedalken Shackles. The Shackles are perfect as they work alongside your Seasinger quite nicely. I also tossed in an Old Man of the Sea which also plays into this idea of tapping a permanent to steal a dork that Seasinger brings.

I'm also running this fun, old-school combo! You want to give some of your other non-islandwalkers that cool level of unblockability as well. You can use the War Barge over and over again to dole out key islandwalking. You can also use it to give islandwalk to your foe's best dork, and then tap Merfolk Assassin to murder it. You are going to get so much value from both!

Also, don't forget that if Seasinger can steal a dork from someone, you can islandwalk them, so you can steal and then smash with your unblockable dork.

Wanna give your foe an Island? Sure thing! Also note that the Will is a free card if you control your leader or a few others when you cast it. That's pretty cool. And you may want to save it for turn four in case you don't have one of the amazing back-breaking turn four plays we look at below in order to ensure the cards flow.

I love Stormtide Leviathan as a fun mid- or late-game way of giving out the Islands and ensuring that you can face-smash away.

We care about Islands for foes, we might as well care about them for us too, right? Right! Cards like Tempest Djinn and Scourge of Fleets will really want you to push your Island count to the max.

This is neither a Merfolk nor a Wizard deck, but Stonybrook Banneret reduces the cost of Merfolk like your leader and the occasional Merfolk/Wizard you may unearth in this build while also having the key Islandwalk to use to swing at your friends. Swing away!

You'll be drawing a ton of cards with Agent of Treachery! Given the proclivity for Thada Adel as well as Seasinger and others (Desertion, Vedalken Shackles, Bribery, etc.) to steal cards, this will draw you many a card.

Drop Padeem after swinging on turn four and grabbing the fattest artifact and you'll get to draw cards from it as well. And protect your best stuff too.

A three (or four) mana clone that can copy a cool dork or the best artifact you just pulled is nasty as a 4-drop too! Ditto Clever Impersonator, who's a great fourth turn drop after you fetch the best artifact. You can also use it on anything else (not named Land). One with the Machine can draw an epic number of cards early by grabbing a fat artifact when you swing on turn four. Punch and draw like 6 or 7 cards with one spell! Just a simple Staff of Nin is going to turn into a card drawing extravaganza.

If you wanna go Spike, you could go for the most expensive card, and then Transmute Artifact into Sundering Titan. That's not my style but some may want to lean into it.

And there we go! I hope you enjoyed our look and Seasinger and similarly themed cards that are either "Island Matters" as well as it's "Your stuff is mine." Anything in here you forgot about or want to try? What about me, anything I forget about?

Thanks for your time, and have an awesome day!

Did you enjoy today's deck and want to check out all the random chaos from the previous editions? Great! Here they are.