Editor's Note: This article does contain reference to cards that were recently censored given their racist/intolerant/insensitive names, art, flavor text, or a combination of all three. We feel it's important to mention them in the context of the history of the Anthem effect since the effect did originate with these cards. For all intents and purposes, historical context is the only reason for their inclusion. Thank you.

Hello! I hope that your day is going well!

Core Set 2021 preview season has started! I hope that you are ready to go! Wanna see the preview below? Sure thing! But first, let's get some context into similar cards and effects so you can see what this card plays into.

Alpha gave us several cycles. Five card cycles that include the powerful Boons for one mana, like Lightning Bolt and Giant Growth. The Moxes. The epic ten card dual lands. And then smaller cycles like Black Knight and White Knight. Oh, and Crusade and Bad Moon as well:

Crusade and Bad Moon, twin versions of the same effect. Note that the templating then gave these boosts to your foe's dorks as well, should they qualify, and this was a part of these sorts of effects for a long time. Both Crusade and Bad Moon led to powerful decks during their heyday, and Crusade's White Weenie was one of the classic decks of the era. It was the major anti-Necropotence deck with its massive numbers of cheap protection from Black dorks (12 copies of White Knight, Order of Leitbur and Order of the White Shield).

These Anthem effects (as they shall henceforth be known) became a big part of the game very early on. In Arabian Nights, the very first expansion set, we got a similar style card with Jihad. It was a three-mana variant on Crusade that would go away if your foe didn't have a certain color, but it also gave a bigger boost in the front.

Two sets later Legends printed Angelic Voices that would pump your team as long as they were White and colorless. Now you could get a boost to Juggernaut or Clockwork Avian if you wished! This was an awesome boost to the identity of White mass pumps. 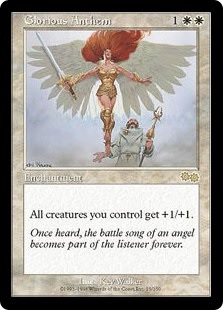 Then a new style of card debuted that combined Angelic Voices and Crusade. With Urza's Saga came a new Anthem style effect, Glorious Anthem. Like Angelic Voices, it only pumped your team, but unlike previous effects, it worked just on your cards and was not reduced to a color or artifact creatures. All of your stuff was now eligible for your pump enchantment. This card was so ubiquitous that the mass pumping of a team was called an "Anthem" effect in honor of Glorious Anthem.

In fact, Glorious Anthem became so Standard that it was in every core set from 7th Edition to 10th Edition. During those days, Wizards of the Coast would have votes that would determine what cards would make core sets as well as other things like flavor text and art. For 8th Edition, Crusade was put up against Glorious Anthem, and Glorious Anthem won almost 2-1 which surprised a lot of people at the time. You can check out the results here.

In had evolved into the go-to mass pump effect for White and grew into a frequent card at kitchen tables and tournaments.

Shared Triumph was printed and it's a creature type Anthem. It's as cheap as Crusade, is splashable, and can work for any creature type build. However, like Crusade, Shared Triumph will help every player. Barring some super common like Humans, your tribe is much less likely to run into helping your foe than the 20% of dorks that are White.

In a similar poll, for 10th Edition three separate flavor texts battled for printing. My personal favorite was, "Each victory adds a new verse." That is succinct, shows the power of victory in battle, and is a great example of flavor text! But it lost. You can check it out here.

Glorious Anthem was so common that it was colorshifted for the set Planar Chaos, whose central conceit is that commonly known cards are shifted to other colors. Gaea's Anthem is a big deal in casual town and is still played at the kitchen table. Shoot, there are 1,246 decks over at EDHREC.com that have registered it. Glorious Anthem? 1,597 decks.

You also began to see Anthems on dorks. Kongming, "Sleeping Dragon" was a starter card printed in Portal Three Kingdoms. It was meant for beginners. Celestial Crusader was a Crusade call back but again shows the ability moving more toward dorks.

Honor of the Pure was printed in Magic 2010, 2011 and 2012. It replaced Glorious Anthem in the core set. The first set to see Honor of the Pure was also the first core set that new cards were printed for. It's cheaper but limited power limited its use to Mono-White aggro builds. You saw the occasional Standard deck during it's run as well.

Another variant of Glorious Anthems you see are cheaper ones that only care about a smaller subsection of dorks. These tend to have heavy impacts in tournaments. Intangible Virtue was a powerhouse during Innistrad Block and made many appearances in Standard. Tempered Steel was a similar powerhouse during its day and it's made appearances in Modern as well. It's a double Glorious Anthem for just your artifact dorks. Others in this genre are Favorable Winds in Blue that pumps flyers and ones that help just one creature type such as the recent Ikoria: Lair of Behemoths grand pumping of all Humans in Sanctuary Lockdown.

Another subset of Anthems goes large. Dictate of Heliod is my favorite Anthem variant as the flash lets you play it as a combat trick should you need to. It's also popular in Commander world as it's run at 4,446 decks almost triple the number of Glorious Anthems (according to EDHREC.com). Want to really go big? Collective Blessing has you covered with its permanent Giant Growth for the team. 2,563 decks over at EDHREC.com run it as it's also more popular than the Anthem of Gloriousness.

This is also an effect that we still can see today with effects like Benalish Marshal that are being reprinted for recent sets, as well as Force of Virtue from Modern Horizons which will let you drop it for free with flash as another combat trick.

Therefore, Glorious Anthem is a good effect for the core set. The Anthem itself hasn't been in a core set from 10th Edition through now. But many similar cards have been!

What Glorious Anthem like card is making Core Set 2021? 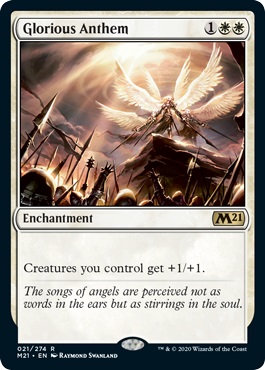 How about just bringing back the original! I think that would work wondrously! It makes the Anthem legal in a few fun formats, as well as bringing back the old times for a new generation of coolness. Welcome back old friend! I hardly know you!

Let's build a New Standard deck around Glorious Anthem for your consideration!

Here we are! I have twelve 1-drops, a bunch of twos, and then a few threes including the Glorious Anthem, double token making Omen of the Sun, and a few valuable 3-drops. My favorite card in this brew is Faerie Guidemother who is my favorite 1-drop. She's a Suntail Hawk who can also pump a dork and give it flying as well as both for just three mana!

And there you have it! Are you excited to welcome back our friend Glorious Anthem? Any brews you are thinking about already? Any card tandems you are looking forward to? Just let me know!