It's time for a Xantcha Smash! 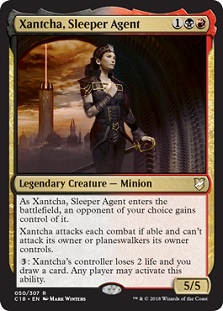 Last week, I wanted to talk about her in my preview article, but I wanted to hold off building a deck around her for a week because I didn't want to annoy my fellow Johnny/Jenny friends out there who want time to think about stuff on their own. Now that you have, you can compare your thoughts and ideas to my own!

After all, I had more than a week to look at Xantcha and come up with combos, synergies, and such, and you had 5 minutes reading my article! That's not fair! I got a Xantcha head start!

So today I wanted to reach out and build this deck after giving you a chance to catch up.

Xantcha is, to my mind, the perfect example of a Group Hug concept.

What is a Sleeper Agent? It's someone who, by all appearances, is trying to be your friend. They want to help you out, and it appears genuine. They give some cool party favors. But then, when you least suspect it -- BOOOM. Dagger to the chest. That's Xantcha. She's someone who seems like she'll be on your side. She's a 5/5! She can swing at your foes! Then you look down and someone died of her Commander damage and you've taken 20 from her life draining and are about to die. She is a perfect Sleeper Agent, because she seems to give more than she is, and then she is active and helps to win the game.

Ready to Xantcha this thang?

I wanted a sort of build that seemed really friendly at first! Here are some cards! Everyone likes cards, right? But then we start to see some hurt.

Now most players aren't going to notice Underworld Dreams. They have 40 life after all. Forcing someone to take a life when they are also drawing a card is just a Phyrexian Arena. Lots of players enjoy that sort of effect and Spiteful Visions is essentially an Arena for everyone. But when they look down and pay attention, they've taken some serious damage.

Similarly, there are other little, small, effects here and there, such as the death of Kokusho, the Evening Star and Gray Merchant of Asphodel. There aren't too many in here, but they are present in enough quantities to slowly push your life into a dominant position without anyone knowing, all while hiding behind friendly cards like Howling Mine and defensive stuff like Stuffy Doll and Maze of Ith.

In addition to the various "mass draw" cards like Howling Mine, et all, I also wanted to dip hard into Red's "Draw 7" set list for Xantcha's debut performance. After the obvious Wheel of Fortune, you can also find Reforge the Soul, Molten Psyche, Magus of the Wheel and even the cool Runehorn Hellkite. This is a classic tool in Red's toolbelt and I want to play into it nicely. I also like the bodies of things like Magus of the Wheel as they let me have critters that can swing or block and such. They add to my density of creatures and my board presence and entice folks to swing elsewhere.

The next thing I want to point out is the unusual decision not to run any equipment. I can't easily equip my Commander. I can do so with things like Magnetic Theft, but for the most part, I'd have to leap through some hoops to do so. Instead I want to run something different.

I envision running something pretty powerful for Xantcha instead, like auras.

I think helping Xantcha to be a sort of Bizarro Bruna or Reverse Uril really makes me happy.

These are both commonly played Commanders that get all aura'd up and swing at people's faces. And I love the idea of helping someone kill opponent's more quickly with the Commander damage of your Xantcha. So what awesome auras can we rely on? Great question!

This is Vow of Malice and it's great on Xantcha as well as other opposing dorks too. Giving Xantcha some evasion is key to ensuring that she isn't blocked. That's also true of Sleeper's Guile. I also like that the Guile can be recast on Xantcha after it heads away, thus ensuring it has fear. Grisly Transformation can replace itself, so it's a free aura. You'll also note Rogue's Passage in the deck as well.

I also like Undying Rage for its ability to come back and Fists of the Demigod and no one will want to block a 7/7 wither, first striker.

Did you catch it?

This is a perfect example of the Sleeper Agent mentality of Xantcha. First is the Sleeper and friendly aspect of Curse of Disturbance. Sure! You want to attack Bob with Xantcha and make a 2/2 dork! I'll get another dork too, but hey, it's only fair as I invested a card here and you are getting a free Zombie token. But then you have the Agent backstab of Visions of Brutality. Whenever enchanted creature deals damage, the controller loses that much lifeâ.â.â.â Uh oh. That is a fast and nasty clock.

I also tossed in an Isochron Scepter.

I originally put it in here for two cards -- Darkness and Terminate. Both the Fog and the dork kill feel good in this shell on a Stick. But we also have cards like Rakdos Charm and Fury Charm. Fury Charm can Shatter but it can also give a target dork +1/+1 and trample for the turn, so you can use it to pump up Xantcha and give her trample.

Other Stick options might include Funeral Charm, Ebony Charm, and False Cure.

Did you see the Captivating Crew here? Hey, if I am investing all of this time into making Xantcha into a major threat, then I might as well steal her back so I can hit someone as well, right? You could also do Frenzied Fugue if you like that idea.

One of my favorite additions to this deck is War's Toll. Whenever the person to whom you donated Xantcha swings, they also have to swing with everything else! That's pretty strong. You are also getting the cool "tap lands" effect as well, but we are playing this for the 2nd ability, that's just a nice, added bonus. I also like Warmonger Hellkite here as well. Now, do note that it will force you to swing as well, and it's the only card in here that does that. But I still like it because you can pump up other attacking teams as they swing into each other.

That's why I am running Rowan as well. She can force folks to swing all out, and punish them by shooting them for three damage after they are tapped (Assuming they don't have vigilance). But she won't kill your Xantcha. She should prove particularly damaging alongside cards like War's Toll, Fumiko the Lowblood or Warmonger Hellkite.

Both of these guys will also help to bleed folks with their first + ability that you can repeat a few times and have useful additions to your board position.

Don't sleep on the power of this Unnatural Hunger. On Xantcha it will slowly whittle away their life total or creature count. It's also good on other high-power Commanders out there, or Voltrons that get bigger.

I also included some answers to potential problems. For example, I need an answer to Homeward Path. Therefore, I am running three lands that can kill it as well as Expedition Map to tutor for any land (or Demonic Tutor as well).

And there we go!

What did you think of my Xantcha build? Any thoughts you had? Anything you want to suggest?

It's time for the Ride of Rakdos at the kitchen table.