Today I want to take a gander at my fourth Real Life Commander deck I've built in the Commander '95 format, and I just finished it last week.

My other three decks are:

What is Commander '95? It's a format I created where you can only run cards that were first printed up through the end of 1995 so that's Alpha - Homelands, Promo. The format has the same banned list as Commander it was printed during the first few years of the game. The card pool is very interesting!

What leader inspired me today?

I wanted to build a reanimation deck, but we only have three traditional spells in the format that will count - Animate Dead, Dance of the Dead, and Resurrection, but that would require an Esper colored Commander who wouldn't be on theme at all. What if I ran Adun Oakenshield instead? If I did, I could tap him and his three mana to select any creature from our graveyard and put it into our hand, which is pretty good on curve. It also unlocks Green's Regrowth and Red's mass discarding Wheel of Fortune.

All right let's do it!

Did you know that Soul Exchange existed? This fun spell from Fallen Empires will exile a creature you control and then brings back a creature from your graveyard onto the battlefield. Normally you don't want exiling effects in a reanimation deck, but beggars can't be choosers. We need all of the reanimation spells we can get! Pretty sweet, right? Right! I think so as well!

Hell's Caretaker has been reprinted since its debut on the market and has a reduced cost as a result. It can tap and sacrifice a creature to bring back another creature, but it can only do so in your upkeep. That's not great, but any card that brings back dead stuff will make the cut in this era, right? Right!

Have you seen All Hallow's Eve that was printed as a sorcery, errata'ed to an enchantment, then turned back to a sorcery after suspend was created and the mechanics existed to keep it a sorcery. I have an Italian copy I purchased a month or so ago in this brew. This fun thing will wait a couple of turns while you pull off counters and then everyone gets everything back! It's a lot of fun. I am running 29 creatures in this build which is a lot for this metagame, so we are likely to have more than our foes. Much more!

Let's toss in the Shadow and the Ghoul. I have a Real Life Commander deck I call Commander Shadow built around these self-reanimating card and sacrifice engines. Both have haste and will come back in your upkeep to the battlefield if you have at least three creatures above them in the graveyard. With haste they can swing after coming back, and they have some sauce to proffer. Good pair!

Check out this odd duo. The Troll is one of the best rates on cost if you control a Swamp. You get a 3/3 Red creature for three mana that can regenerate for

, which is very on curve. There is some removal that won't let it regenerate, like Terror, Dark Banishing, Wrath of God, Incinerate, Disintegrate, and loads more. We are running Eron the Relentless which is also regenerating, and I wrote up an Eron the Relentless Real Life Commander '95 deck for you last week.

The Treefolk is here for a very different set of reasons. It's a nice 4/4 for four mana and can swing at folks. You can take two damage to make it forestwalk and hit for 4. You traded 2 for 4. You can also do the same to give it swampwalk for the turn instead. Trading 2 damage for 4 unblockable in combat is pretty nice. And almost everyone has one of those two lands. This deck has both. My Chromium deck and Skeleton Ship deck have Swamps. The Selesnya anti-flying deck I'm working on has Forests. Only my Mono-Red build isn't vulnerable to the Treefolk.

Spoils of Evil will reward you by playing against a big fat graveyard full of dorks and artifacts! As you cast this interrupt... er... instant, you will target a foe. Sorry no self-targeting. Then you get one life and mana for each artifact or creature in their graveyard. You could easily net 6 or 7 life and mana in the mid game.

Now let's add in some ways to discard to fill out that graveyard.

Let's start with this pair. The Ring was printed in the first expansion set, Arabian Nights, as well as brought into a white bordered core set in Revised. It's a bit pricey at six mana, but it only costs two mana to tap and use. You can tap the Ring and discard the card you just drew and draw another card. In this case you are discarding to draw, the first time you see the effect that would move to Red and is called rummaging today. Then, in the next set, you had the Tome printed. It costs half of the mana of the Ring and the same activation card, and in this case, you tap it to draw and then discard, the first time you see this ability printed which would be moved to Blue and is calling looting after Merfolk Looter. The Tome is an iconic card that has been heavily reprinted, and both of these are very cheap.

Let's look at one more card and then we'll call it.

Bazaar is one of the most iconic and powerful lands ever printed and it's allowed as a four-of in Vintage and powers that format's dredge and graveyard shenanigans. Let's toss in my final copy into this build. I picked up four a long time ago when I was in college for $160, which was the appropriate price at that time. I still have hold of them today, and the other three are in brews. Let's use my last one here. The problem with Bazaar of Baghdad is that it's card disadvantage. You tap to draw two cards and then discard three, so you may only want to use it a few times. But it's still pretty good!

And there we go! Let's turn to our decklist and then a couple of pictures!

And there you are! Let's look at some pics! 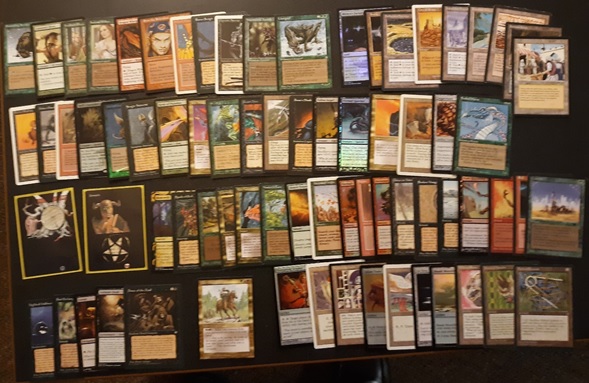 Here is the zoomed-out pic of the deck! 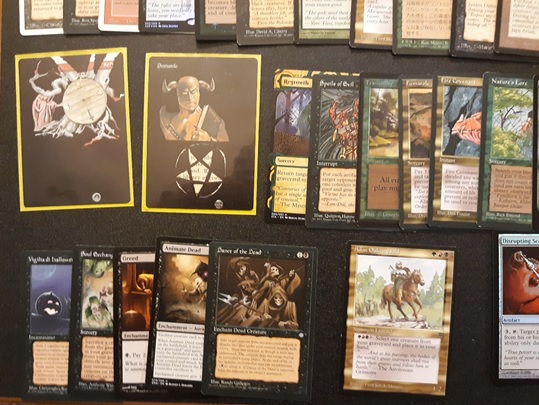 Let's zoom in on some of my reanimation stuff! As you can see, we have some re'arted Wheel of Fortune and Demonic Tutor in here. Our playgroup used to heavily modify cards and I inherited many of them after they got rid of their cards and I have them in here. Enjoy the duo!

And there you go! Anything in here that I missed or that you liked seeing? Just let me know!