Hello! I hope your day is going well!

Earlier this week, CoolStuffInc announced a set of five New Player Mono-colored Commander decks designed by myself as a fun way to start with the format. They are meant to be a fun, evocative way to examine the format, and include a lot of synergy. For folks that are new to Commander or even newer to the game, these are good place to get started.

Each day this week we are going to highlight a different build for you.

Monday, we looked at the first of these Mono-colored builds - Lena, Selfless Champion who makes some dorks on arrival to the battlefield and then can sacrifice to save your team if they are small enough. Then yesterday I turned to our Mono-Blue Kefnet the Mindful Commander deck themed around card drawing and flyers. In each of these articles, we reviewed the decklist that comes with the series, and then I gave you some highlights from the deck and concluded with some suggestions for ways to upgrade it.

Let's continue to follow the color wheel and move to Black!

Our leader is Whisper, Blood Liturgist. Whisper has a lot of cool dials to turn and delve into for this build. I wanted to emphasize two things - creatures you were fine sending to the graveyard, and creatures you want to bring back from your graveyard to the battlefield.

Before I take a look into all things sacrificial, let's review some of the cards I dipped into for this deck, so you can see where I was going.

Phyrexian Rager is a smooth body that will draw you a card when it arrives to the battlefield. It keeps the valuable card flow going, and gives you a body to swing, block, and jump in front of stuff. This Horror is also useful as sacrificial fodder for Whisper. Another Horror that works well here is Slum Reaper. On arrival, it can force a mass-sacrifice. Note that you can sacrifice it to itself if you want to keep your team. Then you can sacrifice it to the great Whisper and bring back more stuff. Burglar Rat can be cast, force everyone to discard on arrival, and then fed to Whisper as well. Also, if you need these abilities later, then you can bring them back with Whisper's ability as well.

These are the sorts of synergies I wanted to dip into for our build. 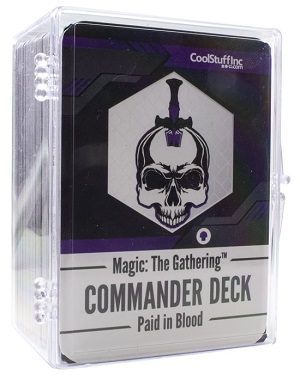 Let's review and unpack the decklist for you.

And there we are! Sacrificing folks for the cause!

Here are a few cards in here that resonate with me.

We have a few cards that have triggers when something dies, like Warteye Witch and Gate to the Afterlife. The Witch will let you scry once for each time one of your dorks dies, so you can get two scrys for each activation of Whisper. Similarly, the Gate will give you life, which is a great way to counter the life loss this deck has. You can also draw/discard, which you are likely to always want to do as you can discard a key creature to reanimate later.

Speaking of discarding a card to reanimate later, Twisted Abomination is ideal in that role. You can swampcycle it early, and then it'll linger in your graveyard, ready to come back up for the cause. Meanwhile, we have stuff like Scrapheap Scrounger that can be returned by exiling a 1/1 that you don't need anymore.

From card drawing to damage dealing to reanimation, there are a lot of things in here to love!

Now what would I recommend next? If I had a budget of, say, $100, where would I look at to spend it to upgrade the deck?

Let's begin with two sweet Lilianas. This is a deck handmade for pretty much every iteration of Liliana. Sacrificing and graveyard good times. The Dreadhorde General is going to be the 2nd most expensive card I am going to recommend to you today. But here? She's nasty good. Note the trigger for her works even for token dorks you have that may die, which is cool. Did you tap Whisper? Draw two. The fact that she's a planeswalker will also help to keep foes from interacting with her as easily as a dork. Making dorks, forcing double sacrifices, there's nothing not to love here! Meanwhile the Majesty of Death also has a strong level of power to offer with her token making and milling and reanimating a dead target. The tokens can easily be sent to Whisper's altar to bring back something better.

The next place I want to turn to are these classics for multiplayer and Commander. Buried Alive is a triple Tutor for three amazing dorks that you can set up for later Whispering. It remains the best tutor effect for these style of decks. Avatar of Woe is easy to cast in them too, and has a powerful presence at the table. Someone will kill it later, and when they do? You can bring it back with a Whisper to your team.

In addition to having valuable enters-the-battlefield abilities on dorks, these both have dying abilities too. The Cavalier of Night is very useful as it's a great body here with its lifelink giving you back life you may have lost elsewhere and acting as a backup sacrifice engine too. You can kill it to recur another dork - a plan that also works with Corpse Augur who will die for the cause, but not before providing you with a big ol' handgrip of card drawing joy.

I wanted to suggest adding a few more triggers to the deck, such as these two. Drawing cards from your engine is always key. You'll never regret drawing cards! Each of these will get you those sweet, sweet card drawing juices going. Note that they won't draw cards for your dying tokens, but that's okay, as each activation of Whisper nets two cards with one of these on the battlefield if they aren't tokens. The Harvester will also net cards from opposing dying things, so your cards like Slum Reaper and such will have an improved value here!

Much like the cycling fun times of Twisted Abomination above, Scion of Darkness plays very well in this build. Cycle it for a card early. Then you can target it with Whisper on the first sacrifice and bring it back. Note that as you smash with your early big trampler you can bring back their dead stuff under your control to keep the darkness flowing. Enjoy it!

How about some creatures with fun enters-the-battlefield abilities! The first two give the deck more game as they can disrupt others. And again, once they've done their thing, they are great to send into the graveyard for something better, or you can recur them again with Whisper to kill something else. That added flexibility is ideal here. Sengir Autocrat is great as he brings four bodies to the able - which are two full activations of Whisper.

I also really enjoy Puppeteer Clique here as well, as you can sacrifice it twice with persist, and it'll bring back something you can use to smash face with. Note that you can also sacrifice it after you swing.

After combat, sacrifice Cloudblazer and the Clique to Whisper. Recur a big fat dork from your 'yard, like Avatar of Woe or even something smaller such as Twisted Abomination.

Puppeteer Clique returns with its persist. Because the Cloudblazerwasn't exiled since you sacrificed it, it's still in the foe's 'yard. Recur it again. Gain 2 life, draw two more cards. Pass, end the turn. Cloudblazer is exiled.

Result - You have a tapped Whisper, a free creature from your graveyard, four life and four more cards, and a 2/1 Clique. You've exiled the Cloudblazer.

And that's assuming you chose a utility dork over a bigger one. Even just two Solemn Simulacrums are two lands, one card, and such. Whisper really loves the Clique!

I also wanted to add in a few more self-recursive dorks, since you can tap Whisper to sacrifice these, and then bring them back. Reassembling Skeleton is great as it just costs mana to recur, and as long as you have that, you'll be good to go. The next two are cheap rares that never caught on, and have really cheap costs. Both are strong because you can bring that back with various triggers.

Finally, Bloodghast. It's very useful in a lot of environments. It's a strong card. However, please note that it's much more expensive than any other self-recursive dork due to just how good it is. It's haste is easy to get in 20 life formats, and the landfall recursion is incredibly easy to do. It's the only one here that doesn't take mana to bring back. I am able to slide it into the budget as most of my other recommendations are very cheap, but I just wanted to let you know upfront. It's a good investment though as it's used in many different formats and places - it'll likely retain its value for trading and such moving forward, if you waver wanted to move from this deck.

Normally here I'd give you a few lands for opening up your land base, but here I am keeping your Swamps. We have effects like Corrupt in the build that care about Swamps and adding in this will work. Because Cabal Coffers is way too expensive, I'll toss in Magus of the Coffers as well. While having the expensive land conversation, Volrath's Stronghold would be perfect for this build. Each of those two lands would basically be the entire budget build on their own!

Oh, and Liliana of the Veil is the same way. Her +1 to have everyone discard hurts your foes but helps you set up Whisper. Her Edict to kill everyone plays into your various strategies while hurting others. That's the best Liliana for this build, but again, she's not here as she's way too pricey.

All right, there are my suggestions. Here we go!

Total Cost of all recommendations is $72.58

Please note that all of the cards suggested above are in stock at CoolStuffInc. The prices I quoted are the cheapest near-mint version I could find. Note that the price of these cards may shift from when I write the article to when you read it, but the point stands.

As you can see, we came in under the budget for y'all as a starting place I'd look at for updates. This theme is deep in Black and there are tons of cards you could select for this project. I can't wait for you to get a chance to try out the Whisper build! Tomorrow we'll look at a certain Red Pirate.... I hope you'll check it out!