Hello! Happy Friday to you. I hope your week has been well!

This week, CoolStuffInc announced a new series of New Player Commander decks that are geared to be a useful introduction to the format for those who may want to try it out. It's also good for someone who may new newer to the game as well.

The goal of these decks is to have something that you try out, enjoy, and then add to later if you like it. They should have enough synergy to work well and give you you a feel.

This is Marwyn, the Nurturer, and she'll be our leader for this build. Elves have always been one of the most popular tribes at the kitchen table, and as soon as I saw this Elf Leader as a possible Commander for this series, I knew that I wanted to make her happen. This is the only Tribal deck in the New Player Commander Mono-Colored decks we built for y'all.

Elves are perfect. They are stronger together than apart. It's easy to upgrade a tribal deck, as it's a load of fun and there are many Elves and Elf-themed cards out there. I could have 50 vanilla Elves with no abilities and they'll have synergy with Marwyn. 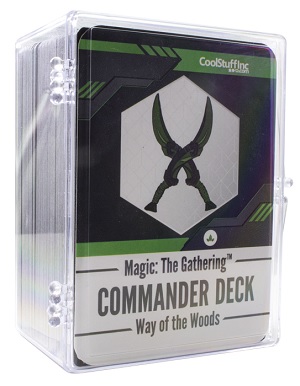 Mono-Green Way of the Woods Deck

Ready to look at our deck? Great!

And there's the deck! Let's look at some of the choices I tossed in.

While my deck does not have a +1/+1 counter theme, Rishkar, Peema Renegade is fun here. Your leader gets counters, and Rishkar can counter up two dorks, including itself if you want. Of course, that means your leader can tap for mana already and two others can now tap for a Green mana. If Rishkar is killed you still get your counters, so the effect lasts. You could easily cast this after Marwyn, and then add a counter to Marwyn with her ability and one from Rishkar's, and then a counter to itself, and you now have a Commander that was just boosted by +2/+2 permanently. She'll now tap for three mana instead of one. That's a lot of mana.

Note that we do have some non-Elves who play big roles in here like removal and card drawing and such. Acidic Slime is an Ooze, but it's destruction here is valuable. Vivien's Grizzly will let you potentially draw cards if the top card is a creature or planeswalker.

Let's begin with some Planeswalkers

Vivien Reid is a powerful Planeswalker that gives you a nice and strong board presence. Her ability to +1 into a card of the land or dork variety is strong in a deck that has a big number of both. Her ability to -3 with a Return to the Earth is also very good. There are decks out there with a ton of flying - like Zur the Enchanter, Kaalia of the Vast, and many others. From Consecrated Sphinx to Cloudblazer or Mulldrifter and many more, loads of dorks are commonly played with their flying. Vivien is strong at slaying them all.

Her Champion of the Wilds version will flash out all of your cool creatures. Getting a flash boost on a harder-to-interact with planeswalker is also pretty nifty, keen and cool. Vigilance and reach means you can swing and keep your dork up to block folks later, and giving it to your leader who may be a 7/7 or something later in the game is awesome. Her -2 also adds to the same card flow that the Reid version does too.

Neither of these cards are pricey either.

Nissa Revane must be here. Her middle +1 for Elf based life-gain is awesome, and her ability to fetch out all of the Elves is amazing. Should I run the substandard 2/3 Nissa's Chosen so I could fetch then with her first +1? I don't think so, her latter two abilities are enough to grow and unleash her. There are other Nissa's you could dip into later that love Green and Forests.

Freyalise, Llanowar's Fury was too expensive on the open market, so I went with Garruk, Caller of Beasts, instead. He loves creatures, especially Green ones. Much like Vivien Reid, his +1 is strong card flow, and can give you more than one card if you reveal creatures. His -3 to drop a Green dork for nothing is strong as well! And his emblem? It's very game-endy!

Let's push into some utility Elves. Wood Elves are fun as a way to grab a cool Forest from your deck and toss it right out onto the battlefield all ramp-ish. I don't have a lot of ramping effects in the build, although I do have many cheaper Elves to be dropping on the early turns instead. The Wood Elves fit here. Speaking of ramp, you can tap Llanowar Tribe for three mana. The turn after you drop this 3/3 powerhouse on the third turn you can conceivably have seven mana available. If you drop it on the 2nd turn with the help of a one-drop like Llanowar Elves or Arbor Elf? That is, as the people from my home state of WV would say, "Gonna bea lotta mana." (We don't put space between our "be"s and "a"s.)

Reclamation Sage is another way to destroy something on arrival and gives you more Elvish ways to break things.

There are also two Elves that we want to add to this deck to give us more options and power. These will both allow a creature to punch more powerful that normally. You can threaten some serious damage. They both exemplify the Elvish way of Stronger Together.

They are also amazing with Marwyn. Remember that she taps for mana equal to her power. If you toss a bunch of counters with the Magistrate, you could easily tap her for 8 or 9 mana moving forward. The same is true of Timberwatch Elf, although that's a temporary bump.

There are some Elf Helpers that I also enjoy here. Yeva is fun! Not only does she have flash herself, but she'll give it to the whole Green team, which is, of course, all your team. Speaking of the team, Beast Whisperer is a fun method to grab more cards as you cast more dorks. Note that it's a cast trigger, not an enters-the-battlefield trigger. That means if tokens enter the battlefield, the Whisperer of Beasts won't care, and thus you won't draw cards. However, should your foe villainously counter one of your cool creature spells, its fine. You'll still get the card.

Now how about some Elf leaders?

Ezuri is where I want to start. He's great in Commander and this deck for a few reasons. Your leader is a mid-wife and a "Nurturer". She doesn't want any of the Elves to die. And any deck like this that goes deeply in early drops doesn't want to set up for a nasty late of removal spells. So Ezuri can regenerate your dorks to keep them on the battlefield. You can also invest extra mana you have into Overrun your Elvish team, which is a great way to punch harder. Your leader alone may be able to tap for 5 mana to activate it once.

For this reason, I am also adding in Heroic Intervention to my suggested budget. It's been a big Commander hit, so it's actually the most expensive card I am suggesting at more than ten dollars, but it's worth it. If you play this deck and like it, adding this in will really prove to be a fun answer. For that reason, although it's not as strong, Wrap in Vigor is making my suggested additions list too.

There are many Elvish leaders out there, so I only added in the ones I felt were best in this deck:

Imperious Perfect (which I've always thought was misnamed, as she looks like she's Imperious PREFECT, which is something that would make sense) fits. Not only will she pump most of your team but she'll tap for a single mana to make more dorks that she can pump. That's a strong force of strength for you all. Meanwhile, the Archdruid pumps the team and also plays into the same space as Marwyn, tapping for mana and making a lot.

Take a look at Leyline of Abundance for a moment. It's perfect for this shell. You have many dorks tapping for mana, and this will add a mana to them. It can also be used as a mana sink to pump the team by tossing on counters over and over again. Imagine you went this:

Common opening right? Now you have four mana from your Elves, and so forth. As any player of Sol Ring will know, four mana on turn two opens you up to a dense amount of your deck. You are going to enjoy the crap out of this card.

There's actually a Core Set 2020 Green rare I like I little more though. This bad boy. Fetch out two dorks from your library at instant speed. Sure, they can't share a name; when has that even been an issue in Commander? It's a great way to sculpt your hand. You can grab removal or pumping, mana and many more cards.

All right, that finishes everything but lands, so let's turn to them...

How about these two? Memorial to Unity adds to the card flow we've been looking at all along. Once your mana is set with your cheaper dorks, you can sacrifice this land for card power. Mosswort Bridge also gives you card advantage as well. It's a fun effect that can let you cast something for free when you have 10 power of dorks. In this deck? I think that's likely.

Since your leader can tap for a lot of mana, you can tap her for mana, untap her, and then swing with her 6/6 or bigger self. You can also tap her twice for mana if you want. And you can untap Elves you swing with to block or use other abilities as well. It's great here! And again, this is not a +1/+1 counter deck, but Oran-Rief will help pump up your stuff as they arrive to the battlefield. You should easily have enough Green dorks to make this pertinent.

All right folks, and there are! Here's the suggested additions.

Note that all of the cards used are priced here at CoolStuffInc. They are in-stock and I am showing the cheapest near-mint price. Please note that the price of these cards can fluctuate from when I wrote this article to when you read it.

And there we are! I can't wait until you get a chance to try out Marwyn's Elves. I hope that you enjoy playing with her, and the others in the deck. Thanks for everything and have a great day!