âThereâs so many human interest stories.â 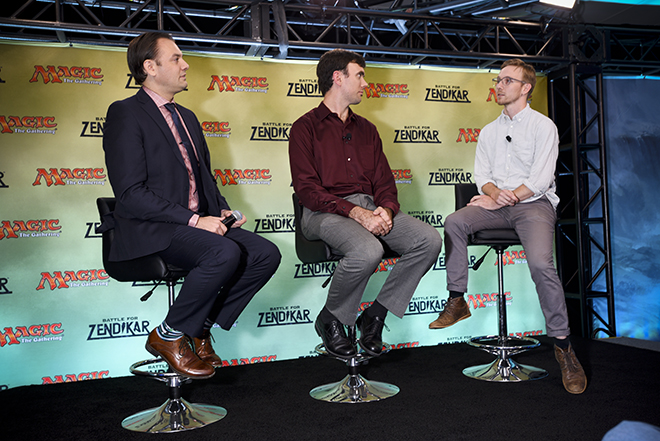 Marshall Sutcliffe, Nate Holt, and Shawn Kornhauser answered questions about Enter the Battlefield: Life on the Magic: The Gathering Pro Tour. (Photo courtesy of Wizards of the Coast/Craig Gibson)

It was an honest moment from Nate Holt, the âWizardâ of Walking the Planes, as he sat next to Shawn Kornhauser, the videographer half of Walking the Planes, on the 2015 World Championship broadcast stage. The question and answer session hosted by Marshall Sutcliffe followed the preview of Enter the Battlefield: Life on the Magic: The Gathering Pro Tour help last Friday at PAX Prime.

In case you missed the announcement: we've been working on a feature-length documentary for 2 years. It's called Enter the Battlefield. ð

Flying home now after an amazing week that included spellslinging at #PAXPrime, crowning a #MTGChamp, and announcing our doc, #EtBMovie!!

You might notice that last bit isnât linked to a sweet hub of information. Itâs because more information doesnât exist, not yet at least.

Edit (Friday, September 4): The brief 30 second spot featured during live coverage of the 2015 World Championship was embedded on the Magic: The Gathering Facebook Page:

From the talented minds behind Walking the Planes comes a insightful, personal look at the stories that drive Magicâs top players to be the best at the game they love. Hereâs a brief look at their feature-length documentary: Enter the Battlefield, Life on the Magic: The Gathering Pro Tour. We hope to have more information about a release date later this year!

Posted by Magic: The Gathering on Friday, September 4, 2015

A Magic documentary has been on the tip of the communityâs tongue since the Scrabble documentary Word Wars made its rounds around Twitter a couple years ago. In that feature, four of Scrabbleâs equivalent to Magicâs professional players were followed through their experiences as players in the lead up to a national championship. Their lives, from making ends meet to individualsâ eccentricities and the difficulties of playing Scrabble at the professional level, was the focal point. While every nearly everyone is familiar with the popular word-playing game, itâs only been in the past year or so that Magic has hit a similar cultural zeitgeist.

With recent looks from A.V. Club and Vice as well as the click-bait âculturalâ eye grab by Gawker, itâs clear Magic has finally hit notes higher than its day in the sun on ESPN 2 in 1999. A movie that digs into what compels everyone from brilliant, successful professionals to teenagers to chase the dream of Magic greatness is overdue. When Holt and Kornhauser exploded onto the scene with their breakout Magic video that staged them into their Walking the Planes series today, they soon began a quest to make a Magic documentary a reality.

While it wasnât the first time filmmakers tried their hands at capturing the world of professional Magic, itâs first to flirt with a true release. Enter the Battlefield is âcurrently in post-production, hoping to announce a release date by the end of the year,â Executive Producer and Creative Production Manager Greg Collins said. Based on what I saw, the film seems complete. 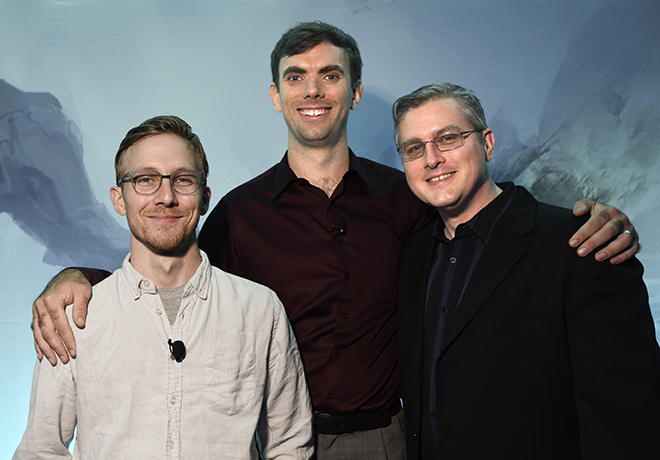 More info on Enter the Battlefield: we're in post-production. Don't have a release date yet. We should know that date by the end of the year

The preview screened for a small group of Magic personalities, World Championship competitors, Wizards of the Coast employees, and a few lucky fans at PAX. It opened with a sequence introducing the game of Magic and some of the personalities the film would focus on, including the âPeach Garden Oath brothersâ Owen Turtenwald, Reid Duke, and Pro Tour Hall of Fame member William âHueyâ Jensen, Melissa DeTora, Chris Pikula, Pro Tour Hall of Fame member Patrick Chapin, back-to-back World Champion Shahar Shenhar and, perhaps most interestingly, Travis Woo.

Throughout the first fifteen minutes or so, it was abundantly clear that the target audience was the same for that of Word Wars and other niche cultural documentaries: the wider audience unfamiliar with the topic. As the film moved to cover some of the storylines that would unfold, the draws became clear. Hearing Shenhar call Duke âintimidatingâ because âheâs a big guyâ and âhe used to wrestleâ as audio over b-roll of Duke pumping weights made sense: Duke is physically fit and cuts an impressive presence. When it cut to Shenharâs father and brother talking about how they felt crushed about Duke losingâtaking the finals loss in his âReidemptionâ trip to the World Championshipâyou could understand their empathy at knowing how hard Duke had worked, just like Shenhar, to get that chance. 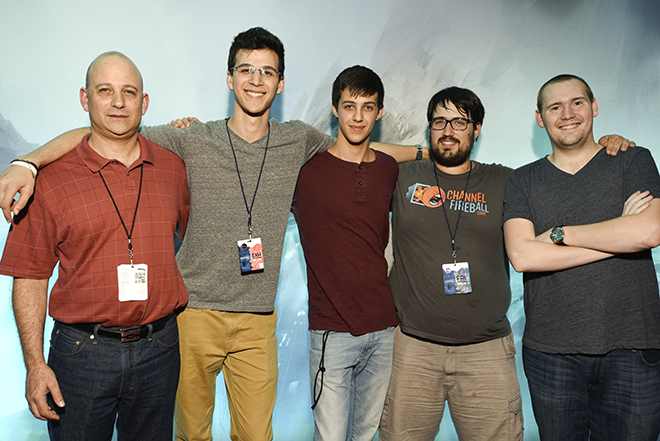 For the preview, Shahar Shenharâs father and brother joined him and select others in attendance at PAX, including Sam Pardee and Owen Turtenwald. (Photo courtesy of Wizards of the Coast/Craig Gibson)

Mutual respect between competitors is at the core for contemporary sports figures today, and it holds true in Magic.

Capturing that essence was challenging. The intensity and care put into the film was abundant. Produced in tight collaboration with Wizards of the Coast, you could see the brand checklist of numbersâplayers, countries, dollars, years, cardsâin the gameâs introduction sequence. But after the requisite catchup was delivered for the audience, the story of the greatest players-as-humans pulled you in.

That human element was exactly where the preview shined brightest. From DeToraâs rise as a female competitor that turned her into an unexpected source of admiration and acceptance for other female players to Chapinâs lifelong pursuit ofâand twin finals losses forâthe title of Magic World Champion, the stories were both driven by the game and entirely relatable.

The process to bring Magicâs documentary to life was a challenging one for Holt and Kornhauser. When asked how much footage was used, Kornhauser didnât have a good answer, but âall of the interviews had to be transcribed by hands. Itâs a Google doc 112 pages long.â

Crafting the narratives is different than it is for a sketch show like Walking the Planes. Both Holt and Kornhauser shared the director title. âItâs not often thereâs two directors,â Holt said about documentaries and film in general. Bringing the narratives to life was complicated. âEvery little bit mattered.â

âGenerally, the documentaries Iâve done have been about a person or single story,â Kornhauser explained. âThis is about a scene or culture of the best players and a lot of different aspects to the Pro Tour.â

One of the most important questions asked during the question session came from Pro Tour Hall of Fame player Paul Rietzl: âWhy the Pro Tour? Why make a documentary about it?â For those who love the game and follow its sets and stories, the answer seems obvious, but that obvious answer isnât enough for the rest of the world.

Thereâs where the opening quote came from. âThereâs so many human interest stories,â Holt answered. âThe Pro Tour is a special part of Magic: The Gathering to be a part of. I want to erect a statue. Itâs like when youâre a kid and you played whiffle ball in the backyard and werenât driven to make the majors, but you knew who Ken Griffey Jr. was. Pros are role models in timeless sports dramas.â

That mentality of the positioning professional Magic players as professional athletes echoed his dialogue from his first appearance, whispering, âWe just saw Jon Finkel. And Jon is like the Michael Jordan of Magic, so I really want to get an interview with him.â Holt and Kornhauser were aware how important making Magic both relatable and majestic is to the wider world. Tying these goals together comes from many angles, including tapping Wil Wheaton as narrator.

As you might know, heâs pretty passionate about Magic and the experiences it brought him, too.

Putting all of this togetherâreverence, passion, personalities, human storiesâfeels right. âIt was the movie I have always wanted to exist about Magic and the Pro community,â Pro Tour Historian Brian David-Marshall said. âI think every Magic player will find something they can identify with even if they have never played on the Pro Tour. Magic is a great game that can morph to take on the shape of any dream you can have for your experience with it. Filling that vessel can be a tremendously rewarding or heartbreaking experience, and this movie does an amazing job of illustrating that.â 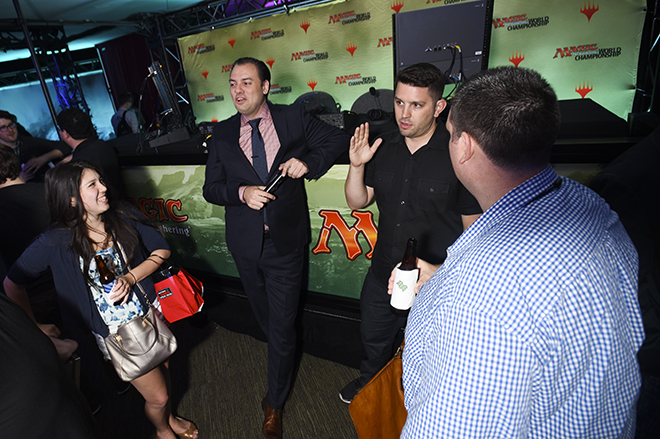 The excitement and response for the preview carried throughout the night. (Photo courtesy of Wizards of the Coast/Craig Gibson)

âIt struck me as something deeply personal for the people being interviewed, and appropriately broad with regards to Magic for the uninitiated viewer. Keeping the film accessible to a wide audience is critical, and itâs obvious that great care was taken to make this a reality,â is how Sutcliffe put his first impressions. That accessibility was his concern. âI have two main concerns. The first is that not enough people will see it. Itâs difficult to get a film like this properly marketed and in front of the right audience. If it does find that place, it will be very successful. The second is that people will assume itâs just for Magic players when they hear about it. The film is about people first, Magic second.â

Good content has a way of getting out into the wider world. David-Marshall was convinced Enter the Battlefield was a home run. âI am always impressed by what talented filmmakers both Nate and Shawn are when they knock Walking the Planes after Walking the Planes out of the park,â he said. âWhile that work is comedic, they have always captured the excitement of the players at the top tables. Seeing them take a serious approach to telling the multifaceted story of playing on the Pro Tour and managing to pull it off just made my respect for their abilities even more profound.â

Itâs with high hopes that Enter the Battlefield moves into its final touches and becomes prepared for a wide release. Will you watch Magicâs first documentary?