Editor's Note: There was a small mix-up with Adrian's article from last Friday in which an older article was republished rather than the proper one. This is the article that was supposed to be released on Friday. Please enjoy!

I can't help it. If there is a tournament format, I will play it. One of my favorite things from the only-slightly-distant past was Block Constructed, as it gave you an entirely new format to play around with, outside of the history of something like Modern or Legacy, and current, like Standard, but small.

I hadn't really dipped my toes into Modern since before Modern Horizons, in large part because I had so much going on in my personal life. I was curious how the format was going to shape up without me. I was pretty sure that Hogaak, Arisen Necropolis was going to make a big splash, but I didn't have a clue as to how much.

One greatly positive thing about Hogaak: at least it got Bridge from Below banned - that card has always deeply offended me, especially the laughable casting cost that was printed on the card for some reason.

As the Mythic Championship in Spain started getting closer and closer, I had friends asking me what they should play, but I didn't have enough experience with current Modern to say anything with certainty. Usually, my answer would be the same: everything is good enough that it is better to play what you know. This wasn't the case for a hot minute when Altar of Dementia made things unfair, and, frankly, it still might not be the case, but I have a feeling that the powerhouse decks of Modern are going to be able to compete in this new world now that Hogaak has been at least slightly hobbled.

It is in the aftermath of the banning of Bridge from Below that I re-entered the world of Modern, playing a few new decks and a few old decks, and tweaking them based on my own intuitions and what I'd see percolating up in the internet lists, giving new twists a try. Like most degenerates in Modern, I have about ten decks I like, and about two or three decks I'm in love with.

One day I noticed that I had a card common in several of the decks I was digging:

I took a minute to think about what was happening to make me like this card, and I came to the conclusion that I was enjoying it because of how it was messing with the plans of my opponents. I've always loved cards that mess with what the other person is doing, and I was really pleased with how the card could be so cruel to Serum Visions and Faithless Looting decks. In addition, some of the interactions it had with your own cards could be absolutely malevolent.

Some of these decks could be expanded to being more colors, but all of them are Izzet, mostly just because the payoff of a third color feels not worth the pain of the cost of that mana.

This first deck has Narset, Parter of Veils in it, but it doesn't do anything to explicitly break the synergies of card draw spells, not even something as simple as Vendilion Clique.

Ah, Hybrid Control - that least understood macro archetype in Magic... In short, Hybrid Control decks take a controlling stance that aims for a late game, but at a certain moment in the game, things snap into a different mode, and the game will end very, very quickly, and the Hybrid Control deck can use a few well-timed tempo-related tempo control cards to keep the opponent from stopping their own demise.

While this deck can get in some chip damage and finish with a Snapcaster Mage or three, it can also create a moment where suddenly Thing in the Ice has become Awoken Horror, and the opponent will have to make it through a single turn or two through copious countermagic.

One of the biggest gifts to this deck in Modern Horizons has to be Force of Negation, which can not only protect Narset, Parter of Veils, but can also create devastating turns with Thing in the Ice. Perhaps the best part about Force of Negation is how it makes some of your Blue card choices much more palatable. Cryptic Command is a hard card to justify three copies of, in large part because despite its incredible power level, the mana cost is significant, but as potential fuel for Force of Negation, it is almost easy to include that third copy, and a fourth is only barely not in the deck currently. (I might cut my one-of Peek for it.) The same is true for the conditional counterspells like Spell Pierce and Spell Snare, as well as my pet sideboard card, Aetherspouts, which I love against both graveyard-based decks that attack, and I find surprisingly powerful against decks like Humans when paired with an otherwise robust creature-kill suite.

Also new in the board are Standard all-stars Fry and Chandra, Awakened Inferno. Fry has made short work of a huge number of Teferi of all flavors (yes, even Teferi, Mage of Zhalfir once upon a time), and is even reasonable against Humans. Chandra, Awakened Inferno has slowly become a card I've gone to in Modern after trying it in a few other decks. Usually, Chandra can take out nearly any creature or planeswalker when it hits play, and the +2 ability is quite significant in drawn-out control matches.

Narset plays a simple role here: push the deck more and more into the driver's seat. Force of Negation and other cheap control spells can often mean you are able to hold the edge for a while, with Thing in the Ice making it all the more difficult to tear a Narset down. Narset isn't doing anything fancy other than stymieing an opponent's plans to draw cards, and that's all you really need here.

Of course, by adding a little bit of symmetrical card draw to the mix, you can make a Narset in play quite mean.

Our symmetrical cards that poke the opponent in the eye are Mikokoro, Center of the Sea and Day's Undoing. The first time you cast Day's Undoing with a Narset in play feels like eating the best ice cream cone you've ever had. This deck doesn't go all-in on these effects by including Geier Reach Sanitarium, though I am thinking about adding it back in... perhaps over a spell.

The rest of the deck is a fairly straightforward Taking Turns deck. The Ancestral Vision-based builds of this deck are certainly safer in some ways than the Dictate of Kruphix decks, but they also tend to be an important amount slower, as well. In order to accommodate that, you need to be slowing the opponent down just for enough time for the deck to take over. I used to run four Exhaustion as a means to accomplish this, but I cut two for two Force of Negation, a card I might very well be in love with.

I wouldn't say there is anything particularly mind-blowing in this list at all, though you can see, again, the return of Chandra, Awakened Inferno, which attempts to be a decent response to the more controlling decks out there, paired again by Fry.

I am only running three anti-graveyard cards, which may be too few, in which case I expect I'll have to cut Fry for another Ravenous Trap or maybe even a Surgical Extraction.

One of the more shocking things that can happen with Narset in this deck is in the process of going off, you can completely stitch together a win on her ability. A turn five Temporal Mastery plus Narset, Parter of Veils can snowball very, very quickly into one of two situations: a full-on win, or a Day's Undoing completely wrecking the opponent. With only two copies of each of Narset and Day's Undoing, you wouldn't expect it to happen as often as it does, but it is a common event for the deck, and especially devastating after sideboarding if a Thing in the Ice or a Pyroclasm/Anger of the Gods has cleared the table.

Day's Undoing and Narset feels mean. Locking an opponent out is a different story indeed. 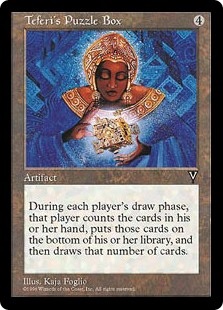 If you're uncertain what happens when Teferi's Puzzle Box and Narset, Parter of Veils are in play at the same time, your opponent will draw a card for their turn, then the triggered ability of Teferi's Puzzle Box will wipe away the entirety of their hand, leaving them with no cards in hand. Only any instants they have will get them out of this.

I was planning on playing this combo this weekend at the StarCityGames event in Columbus, but some important obligations came up to keep me from the event. Here is what I would have played:

A lot of builds of this deck have moved away from Pyrite Spellbomb, and perhaps I don't need the card at all, but whether it is training wheels or not, I've been happier with the card in my deck, both as a potential partial-land, and as another card to kill a small creature. Most of the rest of the dcek is pretty Standard, albeit with the double-graveyard attack maindeck in Grafdigger's Cage and Tormod's Crypt, which I think is fairly necessary even with Bridge from Below banned.

Most of the rest of my deck is very similar to Piotr Glogowski's build, with two significant departures. I run a Phyrexian Metamorph as my "fourth" Sorcerous Spyglass; typically in those matchups, I already have drawn or Whirred to my first Spyglass, and a Phyrexian Metamorph can act as an extra copy if needed, but it can also do significant work in copying a scary creature. Ghirapur Aether Grid is another card I've felt necessary, in large part because I feel like Karn, the Great Creator is commonplace enough that I need an answer to it, and there are enough small creature decks that Ghirapur Aether Grid can create a nearly locked out opponent quite easily.

Narset is fairly powerful when it can hide behind an Ensnaring Bridge, though you need to be careful to manage your card draw so that you don't allow your opponent to attack. The passive removal of extra card draw from your opponent can be huge in making it more difficult for your opponent to escape the lock, especially when cards like Teferi, Hero of Dominaria and Jace, the Mind Sculptor can make drawn out games devastating for such a slow deck like Whir Prison. Just the existence of that single Teferi's Puzzle Box in the deck can turn these matchups around completely, often only Cryptic Command being able to help them escape.

This is going to mostly be a Magic-free weekend for me, but whether you're playing in or watching Modern this weekend, I'm sure you'll see more than a few Narset, Parter of Veils out there. Cheer her on with me, won't you?