This is one of the more contentious times of the year for a lot of people in the Magic community: Magic Hall of Fame voting season.

I view being on the Hall of Fame Selection Committee as a great honor, and it is one that I've taken very seriously. I did not have the privilege of voting on that first ballot for our inaugural class back in 2005, but I am proud to have voted for the Hall of Fame in every year since. Even at the beginning I took that vote seriously, but how I might have chosen to vote in those early ballots has certainly changed - there are absolutely some people I voted for in the past who I wouldn't consider today, and vice versa.

The Hall has grown considerably over the years. Forty-eight people have been inducted into the Magic Hall of Fame. The people in the Hall got in because a sufficient number of people on the Selection Committee thought they were worthy, and even if any individual member might have their detractors, however you cut it, everyone in the Hall is a part of the pinnacle of the game.

To even be worthy of being in the conversation is an incredible achievement. Whomever will enter into the 2019 Class of the Magic Hall of Fame will do so not because they are necessarily the best of the candidates according to any individual voter, but because the amalgamation of all of the voters' visions for what it means to be in the Hall come together to pick the candidates that most reflect what we all think the Hall is now.

With that background, for me, the Hall of Fame should always be about a story. I feel pretty strongly that I would want to tell you something substantive about any member of the Hall and have it feel impressive. Choosing a member of the Hall of Fame at random, I might say, "Steve O'Mhoney-Schwartz (2011) was widely regarded as one of the best players in Magic in the late '90s and a master of the Rochester draft, winning one Pro Tour Championship in Urza's Saga Rochester Draft and making the finals of another Pro Tour in Tempest Rochester Draft. He was also one of the members of Team Antarctica, the dominating Limited team including his brother Dan and his friend, Hall of Fame member Jon Finkel, finishing in the Top Four of the first Team Limited Pro Tour."

I think being able to find that qualitatively powerful description of a player is an important feature for a member of the Hall of Fame.

However, I'm also wildly interested in the quantitative measuring of these players. 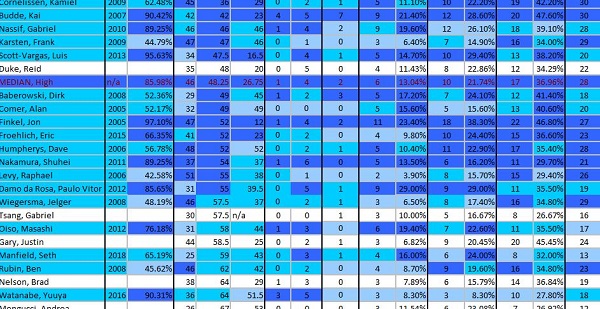 This year, members of the selection committee had some positives and negatives to reckon with in the statistics: the top finishes in a number of events would be tabulated, adding into the mix things like the Magic Online Championship. However, these would be placed in the same category as Pro Tour Top 8 finishes, muddying the waters for those of us who view a Pro Tour Top 8 as different from a Mythic Invitational Top 4 (let alone as different from a MOCs Top 4).

I just can't help myself; I separated the data back out. Furthermore, I didn't feel like the "Top Finishes" that were being listed as important counted enough things, and I added in top finishes in the Worlds Team events, being on the National Team of a country, and being a top finisher at The Masters, as well as being a Champion of any of these events.

This data is available, if you look for it, and I also included the statistics for members of the Hall of Fame at the time they were inaugurated, so that they could be compared to the current class of candidates in more of an apples-to-apples comparison.

So if you are like me and you like data, there is a bit to look at in my 2019 Magic Hall of Fame Statistics file, but I've tried to make it easy to understand and navigate, as well as visually evocative. Everyone has different ideas of what matters, so you can focus in on what you think matters as you evaluate a candidate.

If the Player of the Year race matters to you, you might notice that Reid Duke was a top competitor in the Player of the Year race five times, more than any other current candidate, and putting him in some pretty austere company that most of us can identify by first name (Shuhei, Kai, Yuuya, Paulo, and Juza - the lone last name player in the bunch).

None of the nominees have two Pro Tour wins, but perhaps you want to focus on Pro Tour success, and you think it is about consistency, so you look to Pro Tour Top 64 finishes.

Altogether, I have the statistics separated out for the following:

As I said before, everyone has a specific way they want to figure out their vote. Paul Rietzl recently shared his criteria: 200+ Pro Points ("reflecting the fact that the Pro Tour is just getting older"), Median finish in the Top 100 ("a modicum of success"), and at least one Player of the Year Top 10 ("to make sure at their peak this player was great"). With this, he found a small list of candidates who, after he removed players he felt he had ethical concerns with, came to his list of players to consider more qualitatively.

I am looking for:

After filtering that out, my list is reduced to the following group of players, presented alphabetically by first name.

This is clearly too many people to vote for - I only have five votes! Even then, I'm not obligated to use every vote, and many years I haven't.

To limit these down further, I headed back to the statistics I compiled for ways to discriminate between them. Here is a summary of ways in which each candidate stood out, compared with the current Hall of Fame, with "Excellent" and "Good" meaning in comparison to already inducted Hall members:

(Player of the Year)

I feel very certain about two candidates, Reid Duke and Justin Gary. Of the remaining nine players I'm considering, I'll definitely be pouring over their stats to determine if I add any more lists to my ballot.

It's an honor to be a part of choosing the Hall, and I take it very seriously. If you have an argument for any of my final candidates, I'm listening. Please let me know what you think!