Let's not apologize for who we are. If you need Professor Onyx to be your commander, there's a format for you. In Oathbreaker, everyone starts with a Planeswalker in their command zone along with a signature spell, which you can play as long as your commander is on the battlefield, everything taxed two more each time.

Part 3) Discuss why the changes to Liliana's character introduced in Forsaken are unnecessary, a violation of the color pie, and not original but a sexist trope

Fear not! In this lesson we will not argue against Professor Onyx herself. To do so would be both perilous and foolish. The card may well mean different things to you, but it makes me think of my favorite teacher: a cantankerous old chemist who had no patience for my errors or those of my fellow high-school students. Now that I think of it, he was very similar to Professor Snape. My teacher admonished us while we huddled over open flames, trying not to explode our experiments. He would out-prank pranksters and embarrass know-it-alls. Comics of The Far Side covered his walls, and he stamped mistakes in our lab books with a big red WRONG. My nerdy friends and I idolized him. I can only imagine how I would've felt if he looked like Professor Onyx. 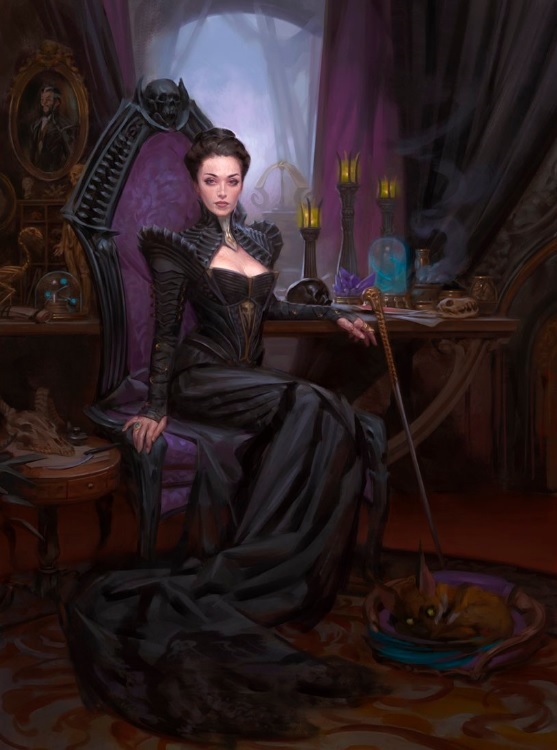 With Professor Onyx on the battlefield, all you have to do is resolve your signature spell to win the game. Target yourself with Chain of Smog and copy it infinite times to activate a flogging of magecraft triggers. Rather than hoping your mentor survives a turn cycle full of haters, try to cast both spells from your command zone in one turn. That's eight mana. To get so much you'll need nefariously fast mana acceleration.

Though this list includes thirteen artifacts, you may wonder why it doesn't feature more. Arcane Signet is a staple, but it only produces one mana. We need much more than that. Cards like Mind Stone and Chrome Mox are more to power out the bigger mana sources like Thran Dynamo.

We aren't playing some of the more traditional Black mana producers because we are interested in one reckless blast of mana rather than consistent big mana over multiple turns. (The fastest mana is banned in Oathbreaker, such as Mana Crypt and Dark Ritual.) We want Lake of the Dead over Cabal Coffers, Lotus Bloom over Extraplanar Lens, and Overeager Apprentice over Caged Sun.

Our sacrificial pupils may surprise you. You could make a case that more artifacts would be better. Be aware, however, that everyone at the more cutthroat Oathbreaker tables expects combos enabled by mana rocks. They play Collector Oophe, Stony Silence, and Kataki, War's Wage. Not only does Basal Thrull sidestep that hate, but you can also pressure opposing 'Walkers before you want to combo.

Be bold to impress Professor Onyx. You're likely to only get one shot to pass her class. If someone disrupts your combo with Chain of Smog, you'll have sacrificed your hand. You do have discard spells and Defense Grid to fight through counters. The only way you'll be able to try again is with infinite mana through Basalt Monolith and Rings of Brighthearth.

We're not playing Rings of Brighthearth. Don't take the cowardly path of planning for failure. Focus on getting it right the first try. That's the way to ace Professor Onyx's final exam.

Of note, we're playing The Immortal Sun because we rely on Planeswalker passives. Most decks in the format cannot use this powerful artifact.

That's not to say our deck needs to be glutted with powerful cards to have fun. Oathbreaker is a better format when you're playing a more casual deck, like this next one.

In this deck we're leaning into the wizard-school theme, with flavorful cards like Painful Lesson and Ransack the Lab. This deck lacks an infinite combo, and that's a feature, not a bug. Tell your playgroup straight out there's no Chain of Smog here. Do so and you're likely to win more games than the previous list.

Though tutors are on-theme for this academic deck, Cruel Tutor was pricier than I wanted. In general, I made this deck budget. If you don't own any of the more expensive cards you can replace them with Cauldron's Gift for an additional Harry Potter callback.

I must cite my sources. Both the Oathbreaker Reddit community and Discord contributed card ideas to these decks. Do join for our online study groups.

I did list Introduction to Annihilation, but I expect you to later replace that and other cards once we see more apt ones from Strixhaven. Technically, we may not have a sideboard, but I would always reach for this lesson, asking my playgroup for permission first. And if my opponent did this, I would absolutely say yes.

What I would never do is search for Confront the Past, despite its utility in the format. This last part of today's lesson plan covers why.

Though there's nothing wrong with Professor Onyx, Confront the Past references character change for Liliana introduced in the aptly named book Forsaken. Yes, that piece of Magic Story infamous for queer baiting and denial of Chandra's bisexuality. The rot of bigotry extended further into Liliana. I go deeper into those cursed pages and the responsibility of Head of Story Nic Kelman in this article.

I and many others hoped Wizards of the Coast would quietly retcon Forsaken, but now I must Confront the Past, with a creeping sense the book will remain canon. At the least, Wizards of the Coast appears not to have learned its lesson, and they failed the test of Liliana's character. Whether or not it was deliberate, the narrative choices amounted to sexist sabotage.

You can and should still enjoy Liliana as a character. Feel free to comment about what you liked about her. I loved her screaming triumph, prying her soul from with bloody hands from dead demons. She sold her soul to the devil and made him pay. That sort of badass deserves respect. In terms of anti-heroes like her, we're excited to follow their stories not because they're good people but because they're amazing and capable.

It may surprise you then to learn that Liliana spends the book of Forsaken moping and pining after two men, Jace and Gideon. Now, to show strong good dynamics you can depict characters changing each other. It does make sense for Liliana to see some of her lost brother in Gideon and grieve for his loss. She may have even come to rely on and value him, if only for his demon-slaying skills. Her identity of Black means she can fight fiercely for her people and mourn their demise, as she once did for her brother.

What she did not need to do was indulge in this degree of self-loathing. This also was unnecessary. Though other characters and players often called her "evil", that is a White-Green-aligned value judgment. Rather than concerning herself with invented systems of morality, Liliana would act in the ways needed to achieve her goals. As her goal was survival, the answer was yes, she did what needed to be done. From her perspective, she need not be ashamed of her actions. Yes, she fought on Bolas's side for a time in the War of the Spark. She also sabotaged his army and did the most of all the Gatewatch to hurt him. By rights, Liliana could have joined the victory feast in the Planewide Celebration. I tend to think she would have been allowed to in the narrative, if she had been a man.

As a society, we are far more forgiving toward powerful men than powerful women. For any number of examples, look to real life. Within the Multiverse, take Jace. Like Liliana he did terrible things before joining the Gatewatch, in non-consensual mind invasions. Though he didn't deliberately try to make lives worse, he wrecked plenty of them with his awful choices and general incompetence. In contrast, Liliana achieves what she sets out to do, to preserve her life at whatever the cost so she doesn't follow her brother into damnation. She was the most effective member of the Gatewatch, and by ultimately defeating Bolas, she did the most good.

Her treatment after the War of the Spark was vastly different than Jace's. We tend to overlook his shortcomings and focus on hers. Our discomfort with strong women extends to wishing them to feel ashamed of their power. We often see women in stories give up power or sacrifice themselves (like Serra and Jeska), and the story Forsaken mires Liliana in shame.

Not only is this a break in the color pie for a Black character, but also it was unnecessary. Liliana didn't need to develop White morality to intervene against Bolas. She could've seen the parallels between the dragon manipulating her and how the Raven Man tricked her as a girl into poisoning her brother. She didn't need any other motivation apart from a desire for self-determination, even if it meant death.

Overcoming her fear of death to break free from Bolas's Clutches is a great completion of her character arc. In Forsaken, she becomes enamored with the idea of dying (for her sins?). Perhaps the writers thought this was an interesting reversal of her prior character, but not only did it undermine what made her great but also it was far from the only option. Rather than her past goal of fleeing her mortality, she could've changed as a character by pursuing the new goal of embracing what she loves in life: demon slaying (to name one possibility).

In an alternate world, Liliana could've returned to Strixhaven to study more demons, where to find them and how to defeat them. She has come to see defeating the powerful as its own reward, come to cherish the thrill of toppling those who would enslave her. She could've maintained her crown as a master of her fate, jeweled with bloodshed and resplendent with triumph.

Instead, we have a character burdened with self-pity. Before moving on, we should acknowledge that self-defeating women make people more comfortable. How much more "likeable" do we consider Liliana now that she's ashamed? We could've interpreted the War of the Spark trailer as depicting Liliana repenting. Again, I don't think that's the most correct motivation for her character, and let's not forget Liliana was coerced.

She either had to serve Bolas or immediately die. You could still blame her for the action she took in signing the contract. But if we're looking pre-Gatewatch, all the heroes look pretty bad. Nissa and Chandra both helped free the Eldrazi. (Neither of those characters give off the same lady-boss vibes that make people so unsettled.) Gideon melted his friends with his hubris. Jace, well, he Jace'd all over the place. As a society let's not be so quick to judge women for the actions forced upon them.

It's been happening for far too long. In Homer's The Iliad, the gods forced Helen of Troy to fall in love with Paris. This started a war, for which everyone blamed Helen, even herself - though she had no volition. Twenty-nine centuries later, this sexist trope is now in our card game. It's not original. It's not fair, and we should expect better.

Sure, let Liliana morn. Let her change, but don't take away what made her an interesting character and turn her into a sexist stereotype.

We can and should keep rooting for Liliana as Professor Onyx, not because of her character change but in spite of it. She overcame four demon lords and a dragon god; believe she can fight off mind control by a few ill-advised writers. She will defeat the curse of bigotry and center herself, re-attune with her glowing purple heart, and gain back her unapologetic power. 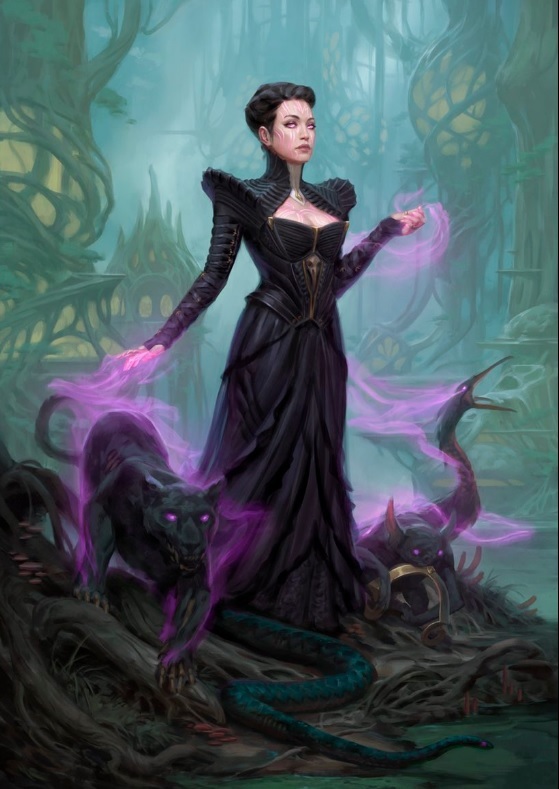