For maximum fun, I go where Magic whimsy takes me. Rather than feeling trapped in any specific format, I like following my Adventurous Impulse, searching for new horizons as old play patterns get stale. Right now nothing is more alluring than the Mystical Archive. 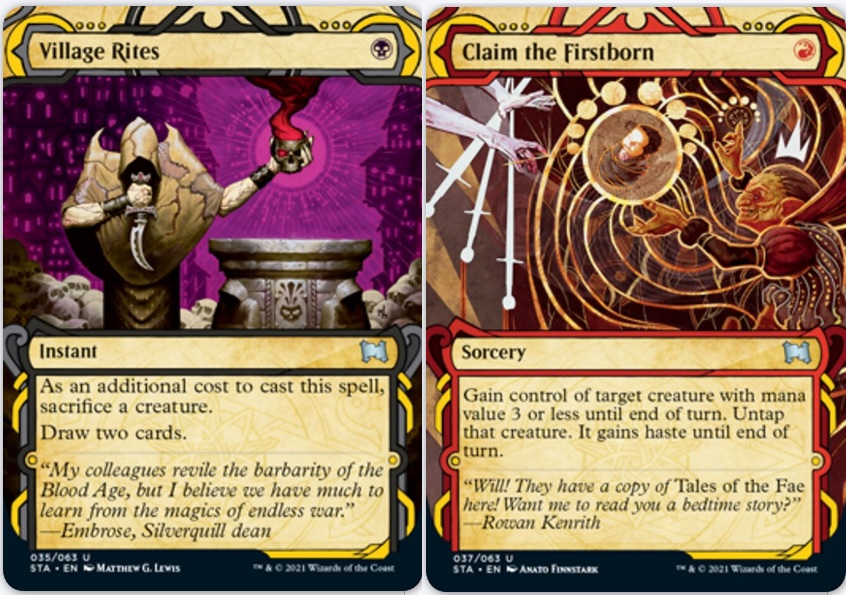 Not only are these card designs exquisite, but most are inexpensive. As of writing this article, I could buy four Village Rites for $1, and I will, along with playsets of most every uncommon from the Archive. I also want to secure a fistful of Abundant Harvest, a wonderful cantrip that will go up in price once it's released in Modern Horizons II. Until that set reignites interest in Modern, I will be more than happy to continue to play Oathbreaker. It allows me to highlight any spell from the Mystical Archive. In this variant casual format, you start with a Planeswalker and a signature spell in your command zone. As long as your 'Walker is on the battlefield you can cast their instant or sorcery, taxed two more each time. In this article I'm delighted to display two decks built around Village Rites.

Claim the Firstborn goes with Village Rites like peanut butter and blackberry jam. I'm playing Threaten effects hidden within the decklist, where they're more a surprise. Having Village Rites face up on the table not only will allow me to stare at it with a wicked smile, but also opponents will be less likely to target my creatures with removal, as I'll have the option of sacrificing them. This instant does work even when it's not cast. And when I Claim the Firstborn, I will cackle as I use their blocker to attack their precious Planeswalker, then drag their dear child to the bloodstained altar at the center of the village.

Oh, and you should know that small and efficient creatures are great in Oathbreaker. Unlike in Commander, here you start at twenty life and need the combat phase to pressure opposing Planeswalkers. Claim the Firstborn is not only a good card, it will break your opponent's heart when they have to give up their baby creature. But don't feel bad for them. They're the one who made a deal with the fey folk. You're just teaching them a lesson.

Aficionados of the sacrifice archetype might raise a brow at some notable exclusions from this list. The truth of it is that there are so many support cards for this theme in Rakdos that I filled two fifty-eight-card decklists with them, plus some overflow. You have a wealth to choose from, and since this is casual, all that's important is for you to select the cards and playstyle that will make you the happiest. This first list is the more aggressive, with all the cheapest Threaten effects, including the most iconic. Tentative Connection is less well known but the perfect choice with our commander.

The uncommon Angrath has led many of my Oathbreaker decks, this one with Allure of the Unknown, again with Goblins, and, naturally, with Minotaurs. Angrath, Captain of Chaos plays well in the format. People don't fear the wayward minotaur, as he has no ultimate to build to, surviving longer as a result, and is perfect for pressuring opponents and a good token generator. Certainly, you could play Angrath, the Flame-Chained with Village Rites, but I don't think that's better. I dislike having my entire gameplan face-up on the table (unless it's a win-the-game combo, which is more cutthroat than I'm aiming for with these lists). People will see Angrath, Captain of Chaos into Village Rites, think I'm playing a value deck, maybe with more tokens. I can shock them with a well-timed Goatnap.

From Carrion Feeder to Mortician Beetle, the synergies in this deck are as obvious as they are delicious. Rather than belabor them, let's talk a little more about card price. I included the expensive Bloodghast because it's a great creature to sacrifice. If you don't own it, you could easily substitute in another card from the second deck, or even Reassembling Skeleton, which somehow didn't make either list - that's how many good cards there are in these colors. That said, Bloodghast is cheaper than it has been in a while thanks to The List (added to my wishlist). I included Bloodstained Mire and other fetches because of minor synergy with Mayhem Devil, but just play with the multilands you own. Also, thank goodness for foils! I used to hate them, but I love how other players chase them, making non-foil cards in Time Spiraled Remastered and the Mystic Archive cheap.

We may have built our list with Claim the Firstborn in mind, but that doesn't mean we have to include every busted card from Eldraine. I excluded Witch's Oven, Cauldron Familiar, and Woe Strider, figuring people would be tired of them. However, if you love the smell of cooking cat... no, just stop. Another card I left out is Rankle, Master of Pranks. Triggers that require hitting enemy players lead to feel-bads in Oathbreaker, where you have to attack Planeswalkers about half the time. Dreadhorde Butcher doesn't have this problem.

The second list is commanded by Daretti, Ingenious Iconoclast. Similar to Angrath, he doesn't appear too threatening, but that's only because I cut Threaten from this list to feature new and more sinister options like Grab the Reins. You can steal a creature at instant speed to block, then invoke Village Rites.

Shuffle this deck together, and I'm confident you'll figure out what to do. Most of the cards either say "sacrifice" or "steal your opponent's beautiful creature that is the summation of their hopes and dreams." I'll just mention a few cards. Think of Chained Brute as a 4/3 wall that can attack with vigilance if you also want to sacrifice something. Bazaar Trader lets you gift a creature you rightfully stole to yourself, permanently. And lastly, Yawgmoth, Thran Physician is great in a format that revolves around Planeswalkers. Remember you can give counters to an ally.