The new casual format of Oathbreaker allows you to brew around card types other than legendary creatures. Today we're designing a deck to cast a signature spell. This instant or sorcery starts in your command zone alongside a Planeswalker. If your 'Walker is in play you can cast their signature spell, taxed two more each time. This week we've chosen a spicy tamale from Core Set 2021.

How would you like dealing six damage to two permanents for as little as two red mana? Planeswalkers are the key of the Oathbreaker format, and being able to toast two at once is earth-shaking. Or you can roll this big lava-ball over two of your opponent's creatures and attack for the win. Best part? If you have over 10 power of creatures in play, you can also reduce the commander tax of Volcanic Salvo.

All that is exciting as a rumbling volcano, but you may ask yourself, "Is this a strong strategy?" In a word, no. If you have over 10 power of creatures in play, you probably already are winning. And if your board has recently been swept, your signature spell is uncastable. Competitive players are leery of win-more cards like Volcanic Salvo.

Luckily, we're playing casual. Here, the power level of the card is less important than its hilarity. Your first question should never be, "How many games can this win?" You don't get any points for winning casual games. Also, the strongest strategies aren't always the best in multiplayer. I wrote an article about winning by chain-casting Teferi's Protection. The deck is obviously powerful, and because of that it loses. In my testing, other decks respect the strategy enough to always attack it first.

Instead of fixating on power, let Marie Kondo guide your casual deck-building. "Does it spark joy?" Why, yes, and Volcanic Salvo does more than spark joy. It sets my whole world on fire.

Not only does Volcanic Salvo give you a mini-game of building a board full of high-powered creatures, but also the powerful creatures it rewards you for playing are ridiculous. Take a look.

Sure, you could build this deck full of conventionally strong Red creatures, but why would you when you can laugh as you play such unplayables as Okk and Veteran Brawlers. The high power of these creatures not only accelerates you to Volcanic Salvo, but it also enables you to easily crew vehicles.

I've included rare and mythic vehicles in past decks because of their strength and their ability to stabilize your board; they dodge most sweepers. But in this silly deck, even common vehicles have their place. Imagine Okk stumbling into the engine room of Aradara Express, flailing amongst the levers, accidentally get it rolling to full steam ahead. Now you have 12 power in play, with only two cards and one of them wrath proof. You can cast Volcanic Salvo for two Red mana and recast it for the same amount.

And if you have 12 power in play, I can think of something else you could cast.

Make sure you give your dreadnought haste with Hanweir Battlements or Flamekin Village. Is this a strong strategy? Still no. But it is glorious.

Vehicles build us the deck-building foundation to elevate our power to obscene heights without losing to one Wrath of God. Our artifact cars tend to have high power for their mana cost. Crewing them requires we tap our other creatures, but tapped creatures still count as far as Volcanic Salvo.

For most decks, it might take three creatures to crew Consulate Dreadnought, but we can do it in two: Goblin Guide and Wall of Razors. If we don't attack with Goblin Guide, we don't have to give an opponent a look at a land. (If you don't own a Goblin Guide, feel free to replace it with a Cinder Wall.) Even if we're not using Wall of Razors to crew, defenders do have additional upside in Oathbreaker. Where a removal spell can only stop one attacker, one wall might dissuade multiple foes from attacking. Better yet, our opponents may well attack each other.

Another way to add to your power without adding to sweeper vulnerability is equipment. You could go harder in this direction, but at least I've included a few of the best. Equip your creature with Bonesplitter; use it to crew a vehicle. Then reequip it onto the front of the train like a brutal cow catcher in Mad Max: Fury Road.

Since we're playing Mono-Red we should probably discuss the Blood Moon in the room. You certainly could play it and Magus of the Moon, but I wouldn't. This deck isn't trying to be cutthroat. It's aiming for fun, and there's nothing entertaining for your opponents when you stop them from playing. Blood Moon would not be a welcome surprise.

That said, I did include Price of Progress. I believe it's more merciful to kill foes outright. This way they can pack up their cards and simply head to the next casual game. But if you want something with more whimsy, play Fling.

We're nearing the end of the article, and I haven't yet talked about the deck's Planeswalker. That's intentional, to show that an Oathbreaker deck can focus more on its signature spell. In this case, our fiery sorcery is enabled by Koth of the Hammer.

We will probably never use the -2, but the +1 discounts our signature spell by 5 mana (one Red plus 4 power). One turn five we could easily play Koth, untap and cast Volcanic Salvo for two Red. Beyond that, the card pair is flavorful. Koth's specialty is geomancy. He's just the type of Planeswalker who could unplug a volcano and send the lava bursting forth in great balls of fire. 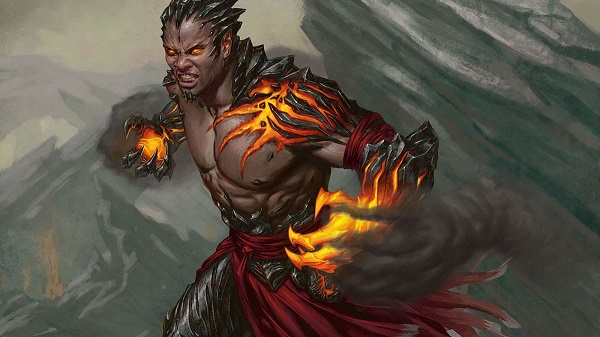 When not powering up zany sorceries, Koth of the Hammer is still a great Planeswalker. In this format he can attack other 'Walkers with his hasty lands, awakening cliffs into 4/4's with his geomancy, and his ultimate comes all too soon. And let's not forget the Mountain he turns into a 4/4 can also crew vehicles.

Imagine, if you will, Koth driving Fleetwheel Cruiser over the streets of Kaladesh. It would be Tokyo Drift, except Koth is outmaneuvering Phyrexians. Should any Phyrexian oil infiltrate the plane of invention, I've no doubt Koth would be the first to offer his aid. He would zoom along the boulevards, spinning the wheel, and skating slantways around turns to reach his destination in time to save the day. And, yes, he would leave burning skidmarks.

Truth be told, Koth is one of my favorite characters in Magic. It's surprising that I've only built him one previous deck, where he helped ramp out Deathbellow War Cry in Mono-Minotaur tribal. I'm not sure which deck is more absurd. Absurdly fun, that is.

Koth has long battled the Phyrexians on his home plane of Mirrodin. Even after the metal world became New Phyhrexian, he fought on. We see his Red identity in the joy he finds in fighting oppression. I love his quote on Darksteel Plate: "If there can be no victory, then I will fight forever."

He has allied with another beloved character, Elspeth. He saw her at her worst, in the Cabal Pits. They shared a past wracked by Phyrexia. Together, along with Venser, they tried to save Karn from the oily corruption on Mirrodin. Though they succeeded in liberating the silver golem, they couldn't save Koth's homeland. He chose fight on as a rebel, but he forced Elspeth to leave for safety. In grief she Planeswalked to Theros, and there began her arc as the Champion of the Sun.

I take heart in Koth's joyous resistance in New Phyrexia. True, that is just a fantasy world, a polluted dystopia governed by inhuman praetors like Elesh Norn, Grand Cenobite. Even worse than the Phyrexian armies is its oil, which infects the populace in a near incurable disease. Should you ever find yourself in a similar place, as unlikely as it may seem, then I can only wish you Koth's indestructible courage.