Not only beginners make mistakes. At Pro Tour Magic Origins, Kyle Boggemes was in the tank. He had to figure out how his grove of enchantments could withstand the mechanical juggernaut of Mike Sigrist. Kyle saw his line. He played a Forest, cast some enchantments, drew cards from Eidolon of Blossoms, played Temple of Plenty, and scryed.

Two lands were laid in one turn. The judgeâs finger of doom pointed out the game-rule violation. 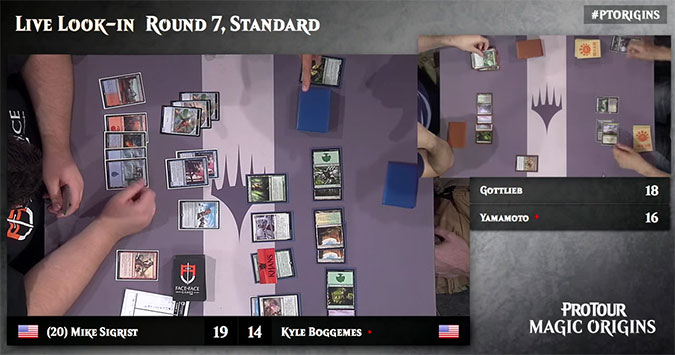 Kyle Boggemes had focused on the higher-level decisions that make Magic fun and stumbled over the fundamentals. And heâs far from the only one. Twice more, the question of playing extra lands came up on the Pro Tour broadcast alone, to say nothing of similar missteps in local game shops. The Magic community needs a better way of tracking land drops.

Problem: Did I Play a Land?

In Foolproof Magic, we explore techniques to avoid the simple mistake that sabotage our game play. For the first installment of the series, I presented the Upside-Down-Land Technique. Unfortunately, itâs now technically illegal to invert cards in coverage matches. Two methods for multiple situations wonât do because weâll be retraining our muscle memory for how we handle cards. We need a consistent way to be certain if weâve played a land. 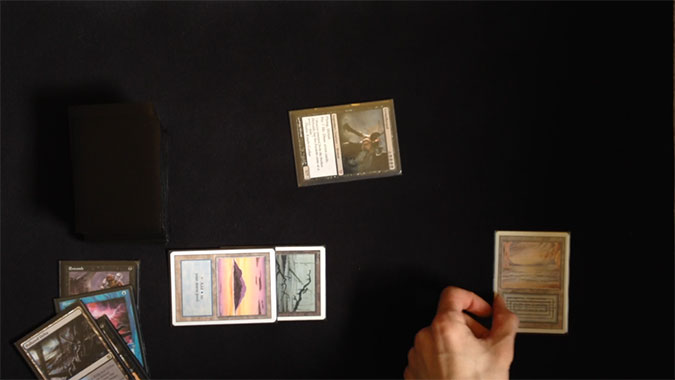 Each turn in Magic, we may explore a new land, playing it and expanding our dominion and power. This is our horizon. We can indicate the new terrain by isolating it from our others. During our next untap step, weâll slide our lands together (and group by type). Weâll clear the space for our next horizon.

Using the Horizon Technique, we will be able to tell at a glance if weâve played a land. We wonât flub our game plan. We wonât stumble into judge warnings. Weâll never attempt to attack with a man land thatâs summoning sick. Itâs clear we just discovered it. The land is on the horizon.

Not all mistakes result in judge warnings. Thanks to improved game rules, players are free to miss triggers (if theyâre beneficial). During the Top 8 of Pro Tour Magic Origins, both red mages pictured forgot to burn their opponents with Eidolon of the Great Revel. 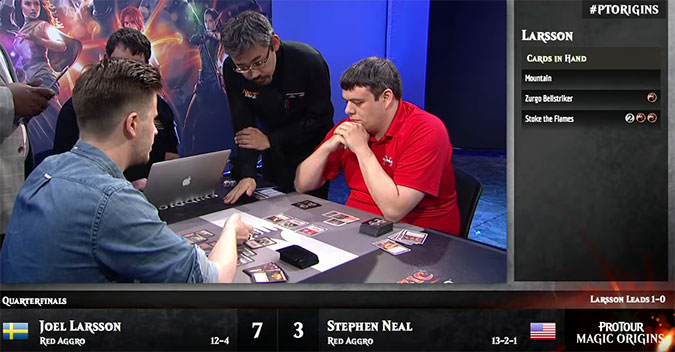 If anyone on team Ultra Pro missed an Eidolon trigger, he had to do pushups (or so the rumor went). While Iâm all for improving cognitive ability play through fitness, letâs look for a way to prevent the mistake in the first place.

Red mages should retrain how they think about the game. Whenever a spell is cast by either player, check for Eidolons on your side. If any have arrived at the party, dispense the Shock. The more we practice, the fewer Eidolon triggers weâll miss.

We may only have a few days to train ourselves with a new deck for a big tournament. Also, we may draft a rare like Managorger Hydra, with which we wonât have much practice. Gabriel Nassif did just that in the Pro Tour. In his feature match in Round 1, he pointed to the hungry beast in acknowledgement that it shouldâve had two more counters. The Hall of Famer had missed more than one trigger. Letâs not assume weâre better players than he is. We need some Foolproof Magic.

By resting a hand on the card, we will divert more of our attention to it. Playing a spell will require we lift our hand from the creature. Then, our fingers will return to the Hydra or Eidolon. Every time we glance down, weâll be reminded of the triggerâannoying, but necessary when a missed trigger could cost us the game. The nature of the Eidolon-style triggers make them harder to remember. For alternate methods of shepherding less difficult triggered abilities, read the first Foolproof Magic.

We can use the touch method to help us remember other aspects of the game. Forgetting to scry after a mulligan is all too easy. I assume the Vancouver mulligan will be widely implemented. After drawing our six cards (or fewer), we should first arrange them to ensure weâll draw the correct number. Then, weâll slide the next card of the library to the side. This will be our scry.

Weâll keep our fingers on the face-down card while evaluating our hand. If we decide to keep, weâll wait for our opponent as needed and then say weâre scrying. Be certain to communicate. Players often flip over the top card in idle curiosity after deciding to mulligan, and our opponent should understand what weâre doing. Make a habit of only looking if youâre scrying after a keep.

Through Foolproof Magic techniques, we can make our play more transparent to our opponents and ourselves. This will result in fewer delays from communication problems and less need for judge calls. At Pro Tour Magic Origins, we saw many top pros championing Hareruya sleeves, and we can learn from watching the stream of this Japanese store. Look how the Legacy player on the left (Sato Kenji) has arranged the top of his library after a Brainstorm. 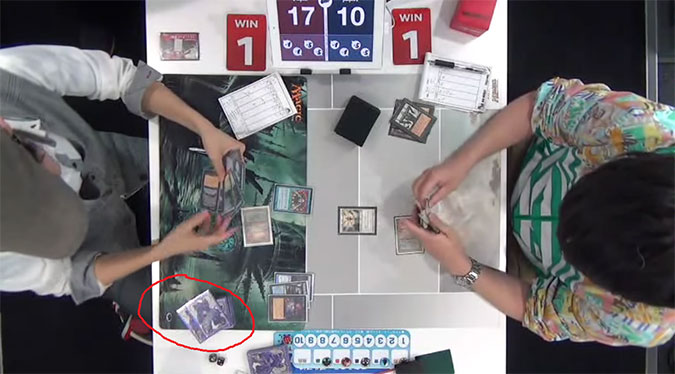 Heâs skewed the top two cards. This technique does more than make obvious weâve put the correct number back on top. By setting known cards at a different angle from the rest of the library, weâre less likely to blunder by drawing a dead card when we meant to crack a fetch first, or by shuffling away a card we scryed to the top.

Problem: Shuffling Away a Topped Card

The same Hareruya channel offers another method thatâs more than good courtesy. The players count their sideboards for each other in three rows of five. This will ensure that both players are presenting sixty-card decks, and the match will be determined by skill, not a judge ruling. 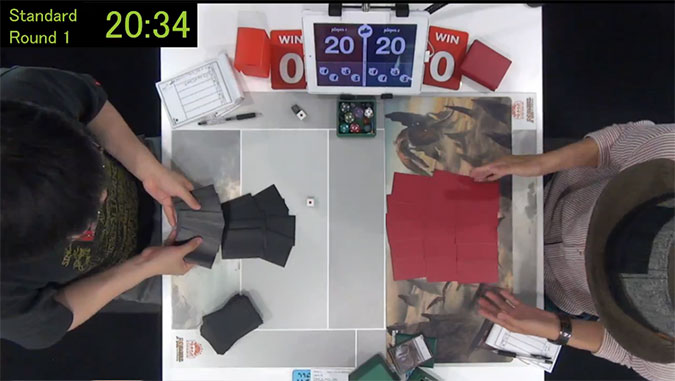 The method of counting sleeved sideboards combines well with another habit Iâm developing, which conceals how many cards are sideboarded. We shouldnât allow our opponents to know how much hate weâre bringing to bear.

Problem: Revealing How Much Weâre Sideboarding

Here, Iâm flipping all twelve cards I want to sideboard in to the front (image #2). I then sandwich my sideboard against the top of my deck (#3 and #4). We now have a column of seventy-five cards. I move twelve bad cards forward in my deck (#5 and #6). Theyâre coming out.

From the top, I remove the cards I donât need (#7). I then press them against the bottom of the column (#8). We can then count out the bottom fifteen (#9 and #10), which should be all the ones we wished to remain in our sideboard for that game.

Weâre going to close out this article of Foolproof Magic with the flavor winner of Magic Origins, Demonic Pact. No one has asked me how to keep track of what modes have already been selected on this tempting cardâyet. How could we resist playing Demonic Pact, even if itâs only on the kitchen table? Over a long, convoluted game, we may well forget how many more turns we have left to live, and thatâs just the slipup our demon masters have been waiting for. 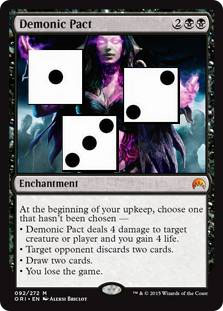 Here, we can see that weâve already picked options one, two, and three. That means we only have one turn left before we must give up our soul. And if we learn nothing else from playing black spells, it should be never to honor our agreements.

What other techniques have you seen or developed that bypass the common pitfalls in Magic? Write about them in a comment. Or let me know what mistake youâd like addressed in the next article of Foolproof Magic.