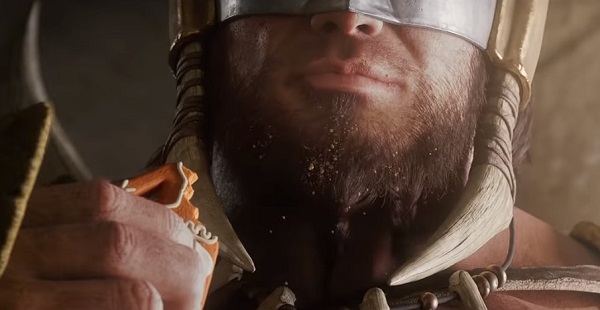 Garruk is here to nom on gingerbread men and overrun opposing Planeswalkers, and he's all out of cookies. 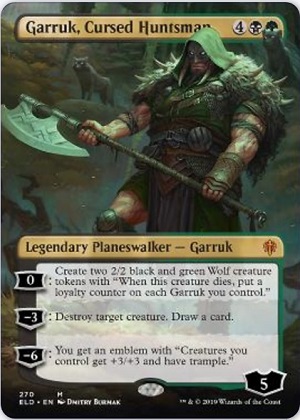 If new Planeswalkers get you howling, dedicate a whole deck to them with Oathbreaker. In this new multiplayer format, your Planeswalker is your Commander (finally!), and as long as they alive in play you can cast their signature spell. Say, in a format that revolves around Planeswalkers and attacking them with creatures, I can think of a good sorcery.

But it wouldn't do to let your opponents see it coming. Hunters stalk their prey, staying hidden even as saliva drips from their fangs. Flaunting such a potent and costly signature spell in your command zone may lose you more games than it wins. The opposing herd of foes may unite to trample you. Instead use animal cunning to conceal In Garruk's Wake, search it up when you can cast it with Diabolic Intent. Then when your prey is in the perfect position, go for everyone's throat.

This deck features every card in Magic with Garruk in the card name. If you wanted more cards with him in the art, such as in Harmonize, you could go in that direction. However, he synergizes with creatures, so I included as many as possible, some from Throne of Eldraine. Creatures like Foulmire Knight punch above their weight class when they can discourage multiple players from attacking you. The other notable new Eldraine inclusion, Lovestruck Beast, draws a card off Garruk's Packleader and - sorry, who am I kidding? I just love the card. Beauty and the Beast was my favorite Disney movie, and I included as many 1/1 mana creatures as I could so they could live happily every after. 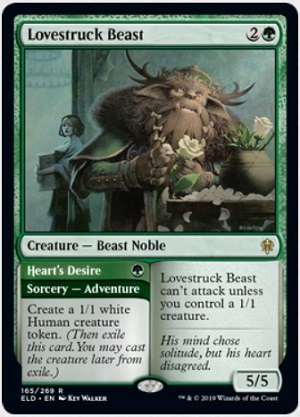 Diabolic Intent finds you your key spells but also gives you an excuse to slaughter your wolves, for the good of all your Garruk cards. Remember, having multiple Planeswalkers with the same name in play is not a flavor fail. It only means they are bringing more of their skill sets to bear. You can read more about that here.

Garruk hunts down his own happiness. He relishes what he has become. The curse of the Chain Veil has collapsed his consciousness down to pure predatory instincts, and Planeswalkers are his prey. Perhaps he should thank Liliana, who cursed him, and Jace, who embedded a suppression hedron into his side and stopped his transformation into a demon. Thank them both, that is, before killing them.

Even before the curse, Garruk distrusted civilization. It jailed his father and then him on his home plane, again on Innistrad, and now it seems on Eldraine. Oko also trapped him in a glamour in the first chapter of the Wildered Quest by Kate Elliott, but we'll see how long that will last. No bonds have held Garruk for long. His heart beats with as much ferocity as a wolf pack. Say, that gives me an idea.

Pine needles shiver in the forest as your pack howls. Orange eyes glint in the darkness as wolves stalk closer, and when they rush into the open to close in on their prey, their fur ripples with silver under the full moon.

This deck leans into token generation from Planeswalkers and enchantments, rather than trying to maximize creature count. Not playing as many mana elves means you'll be more resilient to board wipes. Most of your ramp isn't creature based but still takes advantage of having creatures. One with Nature will feel awkward at times since it will not trigger if you must attack a Planeswalker, but it can also provide multiple lands, giving you enough mana to resolve In Garruk's Wake. The signature spell, Spark Harvest will stop opposing Planeswalkers from going ultimate and kill the wolves you want to die. Garruk will growl with anger, and you can gain the emblem for a permanent Overrun.

You could play typical tribal artifacts, such as Coat of Arms and the newer Icon of Ancestry. I chose more unique tribal buffs such as Alpha Status and Raised by Wolves. Along with my personal favorite, Beastmaster Ascension, Garruk himself should provide all the power boosts your wolves need to devour.

This second deck will play better against more casual opponents. It should still satisfy your inner wolf hunger for juicy victory. You could increase its power level by adding such cards as The Elderspell and Diabolic Intent. And please, if you cast Alpha Status on your Ferocious Pup for the win, tag me in your pics.

No go out there and play Oathbreaker with as much relish as Garruk munching a gingerbread man.