I kept feeling something was missing from the new format of Oathbreaker. Here your command zone features a Planeswalker and their signature spell, an instant or sorcery you can cast as long as your 'Walker is in play, taxed two colorless more each time. That's all fine, but an ache in my heart told me I needed more. But what exactly?

While I pondered that question I put on my cheggings (leggings designed for changelings), bid my Hibernation Sliver roomie a good day, and dashed out of the Sliver Hive with my slithery friends. We did the usual romp, a visit to a scenic cemetery to say hello to Crypt Sliver, sand racing with Sidewinder Sliver, and catching breakfast with Hunter Sliver. I even flew with Cloudshredder Sliver through a storm cloud, between strokes of thunder. I closed out the day in the warmth of the hive, scritching the tummy of Lavabelly Sliver with a fire poker. That's when I realized what I needed to build in Oathbreaker.

Get Ahead with Slivers | Oathbreaker | AE Marling

Sliver players can swarm to the new format of Oathbreaker. Here, no one plays Plague Engineer. Here, there are fewer board sweepers than in Commander. Slightly fewer anyway, since players more often rely on their own creatures to pressure opposing Planeswalkers. Your early slivers are more relevant, surrounding enemy Oathbreakers before they go ultimate. And the damage they deal to opposing players is more impactful, since everyone starts out at twenty life. Because of the importance of early turns in Oathbreaker, I prioritized cheaper spells in the decklist. I also selected only a single sliver to represent every ability, for the sake of diversity, and, well, you have to make cuts somehow in this smorgasbord of slivers.

Artifacts are the easiest way to accelerate and fix your mana in a five-color deck. Also, one of Urza's +1 abilities searches the top five cards in your library for artifacts, and this deck plays enough to make that ability relevant. Yes, it's likely time to address the disembodied head in the room. You may well wonder just what you can expect from Urza, Academy Headmaster. When playing him take out your phone and load his page on Scryfall or AskUrza.com. I'll list a few of the many random results below.

Three damage too all my slivers! Curses, Urza! You traitor! He was responsible for Urza's Ruinous Blast, which started the Ice Age on Dominaria. The Phyrexian oil he brought to Serra's Realm ruined the plane. Clearly, his -1 is a risk, unless you already have Sliver Hivelord in play or Spiteful Sliver. The latter can target opposing Planeswalkers, as can our other forked-tail friend from Modern Horizons, Lavabelly Sliver.

Yes, all of Urza's ultimates are epic. At the least they will dismantle one opponent, such as by destroying all their lands. Classic Urza! Having some uncertainty in the Planewalker ultimate is an advantage. Because your opponents don't know exactly what it is, they'll feel less urgency to prevent it from happening and may, foolishly, allow Urza to live. That is, as much as a decapitated head can live.

Urza lost his head many times. It happened physically in the Phyrexian Arena, when Yawgmoth induced his two main adversaries to duel to the death. Gerrard, with much help from Yawgmoth, executed Urza. This was the darkest hour in the Weatherlight Saga. Yawgmoth swept into Dominaria as a death cloud. The plane of Zendikar may have bad weather, but Dominaria is always cloudy with a chance of apocalypse.

Anyway, Gerrard overcame his despair and realized Urza's head was still yammering at him. Not even death could stop Urza from lecturing. He was a pre-Mending Planeswalker and by definition overpowered. Anyway, Gerrard took his head back to Dominaria. Along with the rest of the Legacy Weapon, he channeled the power of the plane's artificial moon and exiled Yawgmoth. You can see their redemption on the card Vindicate.

Being silver-bordered, Urza, Academy Headmaster isn't technically legal in Oathbreaker. But this being a casual format where the only point is to have fun, he shouldn't be a problem. Simply ask your playgroup first. You'll likely experience more prejudice against slivers, sadly. But at least games with this deck will play out with more randomness and more laughs than in Commander with Sliver Overlord.

The signature spell Return from Extinction can help you recover from a board wipe. It is more flavorful than powerful, which is an advantage. A weaker signature spell will disincentivize your opponents from kicking Urza's head around like a soccer ball. That said, if you find yourself in a more cutthroat playgroup, feel free to increase the deck's power by elevating one of the maindeck sorceries into the signature spell slot. And if you choose Patriarch's Bidding, also play Basal Sliver.

The card Return from Extinction references the many times slivers have returned to Dominaria. The Riptide Project brought them back Jurassic-Park style to the continent of Otaria. Time rifts brought them back to the future in Time Spiral. Their first appearance on the plane came during the Phyrexian Invasion, when the plane of Rath was overlaid on Dominaria in a planar-scale siege.

May your Oathbreaker games be just as epic as the Weatherlight Saga. And may they slither with so many sibilant symbiotes. 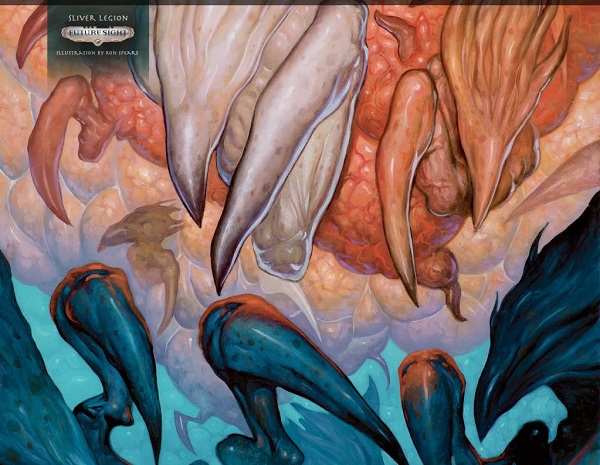