Look, I'm not going to name names, but I have it on good authority that some people love cats. These otherwise mild-mannered individuals are obsessed with anything fuzzy-pawed, whiskered, and retractable-clawed. They are addicted to cats nipping. They wake up to cat whiskers, valiantly empty litter boxes, and go to sleep by counting kittens on Instagram.

Lucky for you, Wizards of the Coast loves cats too. At least, they love that you love them. Not only have they printed enough to build singleton casual decks featuring only cats but also this week you can order Secret Lair: OMG KITTIES! 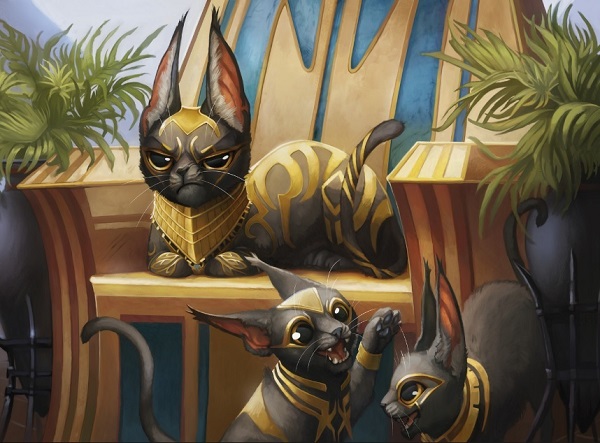 The above Regal Caracal can be found hissing alongside four other elite cats with new art designed to give you the warm fuzzies. If you feel a compulsion to play all of them together, I am here for you with an all-cat Oathbreaker deck. In this new multiplayer format, everyone starts at twenty life, making attacking with cats a more reasonable strategy. In addition, kittens are great at distracting enemy Planeswalkers. Each player starts with a Planeswalker and signature spell in their command zone, instead of a legend. You can play the signature spell (instant or sorcery) as long as your Planeswalker is on the battlefield, and everything is taxed two more each time. 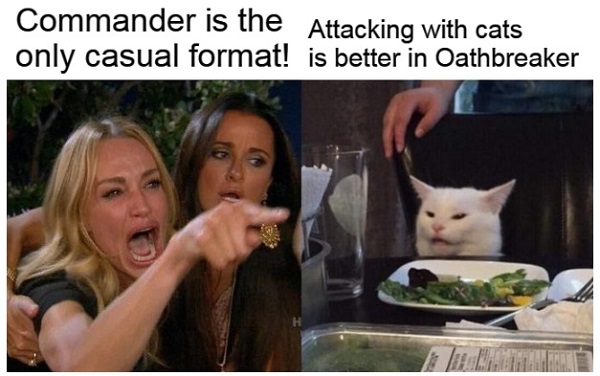 As all cat owners know, they can derail your whole day with cuteness. By pouncing on enemy Planeswalkers, not only can you stop them from achieving their ultimate, but you can also keep them off their signature spell and often disrupt your opponent's entire strategy. Cats in Oathbreaker can both be viable and resilient, with a little help from cat dad Ajani.

This deck's strategy is simple and effective. Aim your red laser pointer at the strongest enemy player. Paw them and their Planeswalker until they explode with cuteness. Cats can be cuddly, but enough have been printed that you can build a sleek and aggressive deck. Thanks to Ajani your cats should have the run of the battlefield. Knock off the table all the opposing Planeswalkers.

You'll find fewer Wrath of God cards played in Oathbreaker, as Planeswalkers are often the bigger threats, yet you should still expect each deck to have a few. If your hair stands on end and you begin fearing a wrath, leave mana open for Inspiring Call. Likely your opponents will opt not to wipe the board, but your mana won't be wasted. Instead you can cast it, singing the Meow Mix song as you do, and draw cards during the last end step before your turn.

Having two cards in your command zone, the Oathbreaker locket, allows for focused strategies. Inspiring Call shores up weaknesses of aggressive decks in multiplayer, with wrath protection and card draw. What it won't do is help you if you tap out playing your last kitten into a wrath, so hold the last few in the litter back. Instead, play Ajani, the Greathearted. He will strengthen your early creatures and benefit your other Planeswalkers. 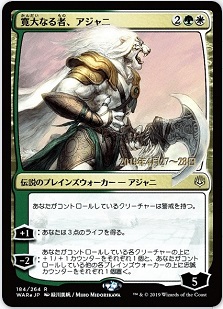 Ajani's other abilities are relevant in Oathbreaker. The format is volatile, and the lifegain may save you. The deck does play Ajani's Pridemate, but there aren't enough other cat payoffs to lean too hard into life-gain. Ajani, the Greathearted also grants vigilance, which is a great ability in multiplayer, where everyone wants to attack defenseless Planeswalkers.

Speaking of, Ajani plays well with other 'Walkers. I decided against non-cats, so the three others in list are also Ajani's. They fit the deck's strategy, and don't worry: together they aren't flavor fails. Having multiple Ajani's in play doesn't mean he's been cloned, only that he's willing to bring more of his skill sets to the battlefield for you. Think of it as him purring and pouncing at the same time, or being cute and fierce. I explain more in this article.

Now let's talk cats. This deck plays as many as possible, thirty total, and gives preference to fast cats. You want more, smaller cats in play to get max power out of your Oathbreaker. Ones with doublestrike are even better, such as Adorned Pouncer and Skyhunter Skirmisher. You can even funnel +1/+1 counters onto them with Scrounging Bandar, though I mainly included the cat monkey for the lols.

If there's a particular cat that brings you joy, you can and should include it. Oathbreaker is a casual format, and the surest way to win is to have fun. To that end, I added Lynx, as I feel the art is beautiful. If you think Trained Cheetah is the best cat, never mind the stats; add it. Or how about the art on Graceful Cat? Or Noble Panther? Or Mist Leopard? Or Phantom Tiger? All adorable.

You can never have too many cats, except when you're trying to get your Oathbreaker deck down to fifty-eight cards. I had to make some tough choices. First to go were the expensive and slow cats like Highcliff Felidar. As powerful as some of these cats are, they would be more suited to a ramp deck in Commander. In Oathbreaker, I wanted leaner and meaner cats, like this savage. 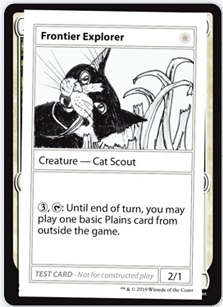 Terrifying! I'm a little surprised that one isn't typed as a cat beast. Anyway, the last cat I took out of the deck was Felidar Guardian. I thought we had seen enough of that kitty blinking Planeswalkers, but feel free to include it if you disagree. I also excluded the cards Leonin Arbiter and Veil of Summer because I thought they might be a little too serious for casual games, but include them if you want to go in with claws out.

Some cats don't play well with Planeswalkers. These are Longtusk Cub, Hunting Cheetah, Initiate's Companion, Qasali Ambusher, and Stalking Leonin. They're all strong cards, but they will lead to feel-bad game choices where their abilities won't work if a Planeswalker is being attacked. In Oathbreaker, that happens more often than not. Feel free to play any of them if you want, as long as you know about the nombo.

What does play well in Oathbreaker is Hungry Lynx. Remember, you can give those rats to an ally. They're gifts, sweetly delivered at the end of your turn to their doorstep. Aren't cats generous?

Well, not all cats. Scythe Tiger makes you sacrifice a land. How exciting! Talk about a pouncing tiger! Fits right in to a Calvin and Hobbes comic strip. Adding +1/+1 counters to a creature with shroud will make it all the more terrifying. I didn't include it in the list above, but you can add it, as long as you understand not to play it turn one but turn five. Cast your Planeswalker or signature spell and tap your last mana to deploy Scythe Tiger.

A few alternatives to the signature spell bear mentioning. Courage in Crisis is strong in a deck full of Planeswalkers and creatures with counters. If you don't fear wraths in your Playgroup, you can start with it in your command zone. Perhaps it should be somewhere in the list anyway. The other card that tempted me is Collected Company, but it is best when your deck centers around three-drop creatures. That isn't the case here.

I would be remiss if I didn't talk briefly about the lore of Ajani. An albino nacatl from Naya, he was discriminated against by his tribe. The only cat to have his back was his brother, Jazal Goldmane. Ajani sparked when he died. He took his brother's axe as a memento mori, a habit he continued with Elspeth's cloak after her murder on Theros. Ajani fought Bolas on Alara, the Consulate on Kaladesh, and joined the Gatewatch in the War of the Spark. He likes hugs but not tummy rubs. 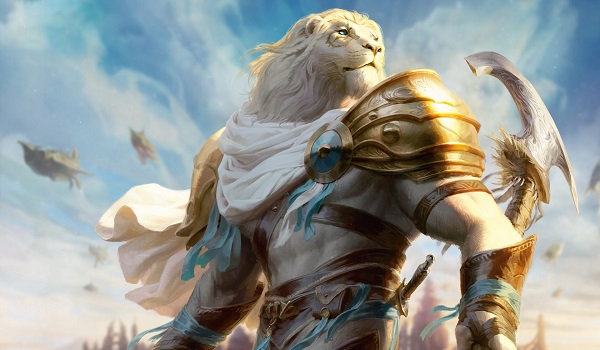 Wishing you all a yarn-chasing good time with kitties in Oathbreaker. 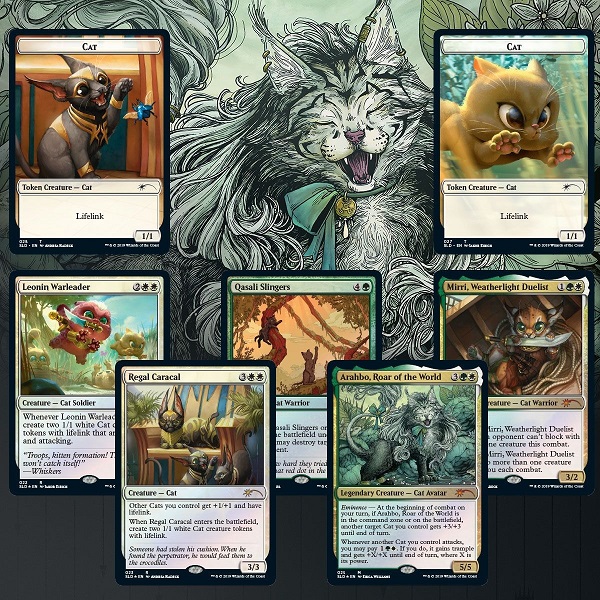