The best part of returning to Theros may be Ashiok. On that plane devotion shapes the Starfield of Nyx, and Ashiok, Nightmare Muse harvests fear to raise godlike nightmares. This week we're giving our multiplayer opponents a scare with a hidden Polymorph strategy.

Most Oathbreaker decks have their game plan face-up; you can see both Planeswalker and signature spell in the command zone. As long as you have the former in play, you can cast the latter. Each card in this locket has an individual commander text. Unlike in Commander, you can and must use Planeswalkers, and everyone starts out at twenty life.

Our previous Ashiok deck deceived our foes with Glimpse the Unthinkable as its face-up signature spell and its Reanimate cards lurking in the library face-down. This week we'll be doing something similar with Polymorph. Thanks to our signature spell of Vampiric Tutor, we'll have more control over finding the best of our dangerous threats.

We will explore more budget options later. First, I would like to acknowledge that this isn't the fastest route to Blightsteel Colossus. For that you should chose Kasmina, Enigmatic Mentor as your Oathbreaker. You could even conceal your strategy with Mystical Tutor as your signature spell. The advantage offered by Ashiok, Nightmare Muse is some selection in your creature transmogrification. You can even call forth multiple nightmares at once with Mass Polymorph.

If your opponents all have their Planeswalkers in play, you can place Thief of Blood on top of your deck with Vampiric Tutor, Polymorph, drain all Oathbreakers of counters (including your own), and potentially attack for lethal with Swiftfoot Boots. Or, you can draw a new hand with Jin-Gitaxias, Core Augur. Or you can summon from the abyss of consciousness Blightsteel Colossus then sweep the board with Damnation, leaving only that one dark silhouette towering on the horizon.

Doom! Doom! The ground will convulse with the artifact creature's nearing footsteps. Like in a dream, your opponents will scramble in the gloom, unable to see what you're doing, unable to stop what's coming. Doom! Doom! They'll try to escape. Every path will end in more darkness, every trick of theirs you'll thwart. Your deck has many perfect answers and the tutors to find them.

Any problematic permanent you can bounce with Ashiok, Nightmare Muse or Cyclonic Rift then force your opponent to discard it with Thoughtseize, or counter it on the way down. Ritual of Soot can blot out anything small in your way. Tale's End can foil an opposing Oathbreaker being cast or undermine an ultimate. The spell can also stop a Maze of Ith from delaying the inevitable. You can accelerate your game plan by searching for Dark Ritual or Mana Drain.

Tutor tip: Don't make people wait for you to tutor in a multiplayer game. Do it while others are taking their action, so when the turn is passed back to you, you're ready to play.

You shouldn't need to cast Polymorph too many times to win, but you can rebuy it with Mission Briefing or Mystic Sanctuary. The deck plays Bad River as another way to fetch the sanctuary into play, along with more dual lands with the island type to enable it. You also have backups in Mass Polymorph and Proteus Staff.

Before you can cast Polymorph you'll need a creature in play. The most common one will be a token dreamed up by Ashiok, Nightmare Muse. However, you can also get a target from one of your creature lands, including the adorable Zoetic Cavern. And by adorable I of course mean horrifying. Since Polymorph isn't in the signature spell slot you can potentially cast it faster, with a quick morphed Zoetic Cavern enabled by tutors. Remember, Scheming Symmetry can help an ally. Or you can negate its downside by attacking with one of Ashiok's tokens. In desperate times, the army from Enter the God-Eternals can transform into something even more nefarious.

The other Planeswalkers in the deck can also make multiple tokens, enabling even Mass Polymorph. Keep in mind you can unlock the cards Ugin manifests with a Ritual of Soot. As another path to victory, kick Rite of Replication. It can clone your Blightsteel Colossus or re-buy the ETB effect of Thief of Blood.

If the threat you want is in your hand, you can even play it directly with Show and Tell. Or put it on top of your library with Brainstorm. You may even be able to cast it directly if it's in the late game. You can always seek out an Everflowing Chalice and cast it for X equals three or four.

The deck's main strength lies in its secrecy. Once your opponents are wise to your strategy, they may well commit the resources to counter you. Duel with this deck at Commandfests against players who haven't seen it before. Still admit its power level when asked, which I would estimate to be eight out of ten, but you don't have to tell the particulars. They may well guess. The tutors may make them fear, but it's hard to see Ashiok, Nightmare Muse as the greatest threat while other more dangerous strategies are face-up around the table.

In the past, I and others have referred to Ashiok with the singular pronoun "they." That's wrong. Ashiok does not identify as nonbinary but instead prefers to keep gender a mystery. Refer to Ashiok only as Ashiok. Yes, not having an available pronoun is uncomfortable. That's how Ashiok wants you to feel. 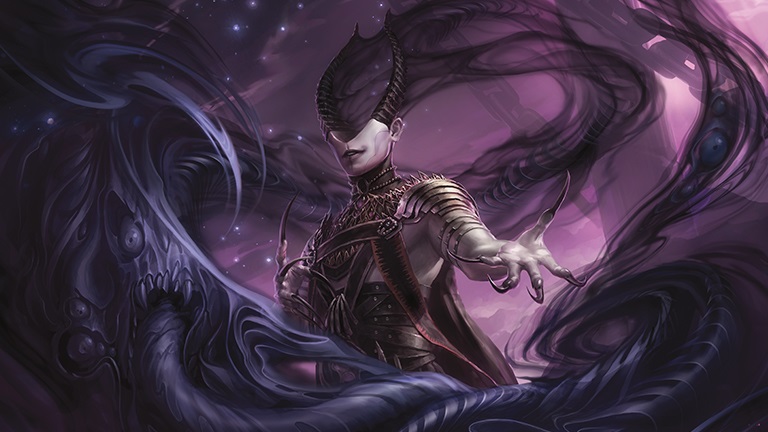 Let's close with the promised budget options. I'll look into substituting any card that costs over ten dollars.

Ancient Tomb can be Dimir Aqueduct.

Morphic Pool can be Underground River or Jwar Isle Refuge.

Watery Grave is pretty important, as it's an island, so I would try to get one.

Damnation can be Consume the Meek.

Demonic Tutor can be a See Beyond, another way to make use of an uncastable creature.

Show and Tell is well worth buying.

Thoughtseize could be a Duress or Cabal Therapy.

Arcane Signet can be a Talisman of Dominance.

Cyclonic Rift can be Aether Gale.

Force of Will can be Swan Song.

Mana Drain can be Negate.

Blightsteel Colossus can be Ulamog, the Infinite Gyre, if you own it, or Platinum Angel.

Vampiric Tutor could be Scheming Symmetry, in which you would replace that maindeck card with Preordain. You also have the option to playing Polymorph in this signature spell slot, though again I believe you would be better off playing Kasmina, Enigmatic Mentor as your Oathbreaker. Unless of course you simply love Ashiok, in all Ashiok's smoldering deviousness. That too I can understand. 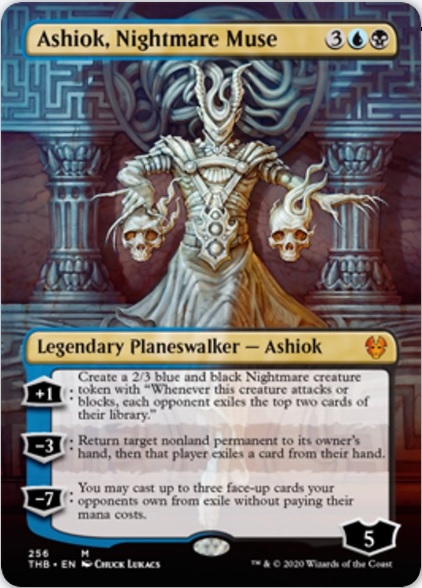