Rivals of Ixalan is the final Standard small set for the foreseeable future. The change in release structure means that there will be one large bundle of cards printed every quarter as opposed to alternating up and down the size spectrum. I am looking forward to this change and many of the reasons are evident in Rivals. Simply put Pauper benefits from the cleanest distillation of mechanics and having to stretch them over a block means that each new batch of cards will have fewer potential. Conversely, concentrating these mechanics to one set increases the likelihood of seeing powerful iterations of effects. The Rivals of Ixalan spoiler came out last week, and despite there being a few clearly powerful cards, the set feels empty.

There are 67 commons in Rivals of Ixalan and 21 of those are either reprints or functional reprints, including four cards straight from Ixalan. Pauper has to come second to Limited as these cards are around to help improve draft. These cards are also around for Standard -- I see you Shatter -- and with the return of the Core Set cards like this will not be long for expansions. But it still means that we are looking at 46 potential new cards added to the format and with around 10 cards that could see fringe play, we are looking at a conversion rate of better than 20% which is the level of recent reprint heavy sets. This is going to be great, right?

Let's start with the new mechanic in Ascend. A threshold mechanic in that it checks for a certain criteria to be met, Ascend wants 10 permanents under your control and then you get the City's Blessing. Once you get the Blessing, you cannot lose it, even if you go under 10 permanents There are only three commons featuring the ability. Dusk Charger is a 3/3 for

that Ascends and becomes a 5/5. Even if Gurmag Angler was not in the format, Blastoderm and Imperiosaur rarely see play and the Charger is hardly better than those.

Snubhorn Sentry is in the color most likely to trigger Ascend easily thanks to token producers. Raise the Alarm, Battle Screech, and Triplicate Spirits would mean that getting the Blessing, and thus a cheap 3/3, would be fairly easy. Such a deck would also run some number of Rally the Peasants like effects meaning the little dino that could would probably deal damage regardless. Even so, it is a lot of work for a relatively small payoff.

No if we are going to Ascend we are going to be playing Secrets of the Golden City. At its base, it is a harder to cast Divination which is just below the power curve of Pauper. Three cards for three mana, however, is a spell worth investigating. There are a few other draw threes in the format, including Mysteries of the Deep and Lead the Stampede (in Elves at least). Compulsive Research sees some play for its ability to see three new cards at the cost of a discard (or two) but Secrets of the Golden City is three cards, provided you have ten permanents.

So, clearly this deck is playing Blue and wants the game to go long. Thankfully, Pauper has access to Counterspell and Mana Leak to get to the latter stages of a battle and Signets to add permanents and mana. Forbidden Alchemy is the lynchpin card of a

control deck at the current moment but that does not mean Mystical Teachings can't make a comeback. While it may be odd to run a Sorcery in a deck based around a tutor for Instants, Secrets of the Golden City could allow the deck to pull ahead in the late game rather than relying on trading one-for-one. While not guaranteed to see play, Secrets of the Golden City is a rarity in Pauper -- a new effect -- and it is absolutely one worth exploring.

Rivals of Ixalan also continues giving us creatures for the same tribes as Ixalan: Dinosaurs, Merfolk, Pirates, and Vampires. While none of these creature types have made waves in Pauper at a competitive level, there are at least enough Merfolk and Vampires to warrant looking at these tribes. Pirates and Dinosaurs are not new additions to Mistform Ultimus trivia game but do not have nearly as much support as the other denizens of Ixalan.

Vampires are concentrated in Black with a few cards in White and Red. Dusk Legion Zealot is a good card, even without the creature type, and will see play due to its ability to help a deck see more cards. As I discussed last week, Zealot also fits nicely into a potential Soldiers deck. The only other creature that hits both types that could see play in Pauper is Martyr of Dusk.

Where would Martyr see more play? If you want Vampires. Right now there are numerous Vampires that reward you for playing with the power of death. Falkenrath Noble makes every creature that dies into an extra bit of damage, while Bloodthrone Vampire and Vampire Aristocrat let you sacrifice at will. Queen's Commission will make two tokens a full turn slower than Raise the Alarm, but at least they are on type. Even so, there is no payoff in these colors for going wide with the fanged folk. Martyr of Dusk remains a reasonable creature and be hitting the battlefield and trading with Nettle Sentinels for years to come.

Merfolk get some sweet cards in Rivals of Ixalan. While the tribe has a long history in the game of Magic it has been largely absent from Pauper. Unlike Modern and Legacy, Pauper Merfolk has to play without Aether Vial, Cursecatcher, and various lords -- creatures that improve the power and toughness of a specific type -- and has lacked a cohesive theme. Ixalan and Rivals have given our fishy friends a real identity in the format in the shape of +1/+1 counters. River Herald's Boon is a blowout in Ixalan draft and the ability to give two permanent points of power at instant speed is worth looking at. Merfolk now have a critical mass of reasonable 1-drops including Jungle Delver, Mist-Cloaked Herald (and its brethren from Journey into Nyx Triton Shorestalker), and now Jade Bearer. Jade Bearer may not be the best card to play on the first turn, but it is a fine drop later in the game and works well with both Ninja of the Deep Hours and Arctic Merfolk (from Planeshift).

All of this is cute, but it is Jungleborn Pioneer that might make it viable. Any creature that comes with another creature as a token is close to good enough on its own, but here the token is the real spice. A 1/1 Hexproof creature is not impressive on its own, but when playing along the lines of the Tribe it can get out of hand rather quickly. Pair these Merfolk with Mana Leak, Ninja of the Deep Hours, and maybe some Auras and you have the core of a tempo deck that could get out of hand quickly.

Outside of these specific creatures, Rivals of Ixalan has a few cards that could be included in various decks to fill specific roles. 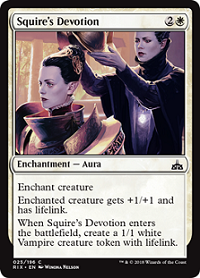 Squire's Devotion is expensive for its effect but it does come with an extra token. Hexproof decks will sometimes have copies of Lifelink in the sideboard and often have Cartouche of Solidarity in the maindeck as a way to combat Chainer's Edict. Squire's Devotion could take one of these slots in order to offer some maindeck protection.

Grasping Scoundrel is a nice little aggressive creature for the Mono-Black beatdown deck that never quite materializes. Moment of Craving mashes Disfigure and Pharika's Cure together. While it is a turn slower than Disfigure, the ability to eat a River Boa while also giving a small life boost means it might see play as a one or two of.

Fanatical Firebrand is another take on Mogg Fanatic. While it is less flexible than the original Mr. Fantastic, the mix of abilities here might matter in a deck that cares about Raid. Gleaming Barrier is on the other end of the spectrum as it is a purely defensive card. At two mana, it is the right size to come down and absorb some blows, leaving behind a Treasure on its way to the graveyard. Free mana is good which means that the Barrier might have uses but where exactly, I can't say.

Rivals of Ixalan is not the highest power set. Like many Standard releases as of late, it has a suite of cards that could see play and fill niche roles. The big winner here is Merfolk, as the tribe gets a number of tools needed to at least make a deck worth of consideration. And since it's a popular creature type we can be assured there will be more in the future.