The last time I visited my Teysa, Orzhov Scion deck, I came to the realization that I was no longer having fun piloting one of my oldest Commander stacks. The more decks I built, the more I began to recognize my recurring themes. I loved making tokens and sacrificing them for value. I loved casting huge monsters and sacrificing them for value and then bringing them back from the graveyard. Teysa tried to do all of these things while simultaneously leveraging her abilities and ended up doing nothing well. As my arsenal grew, I realized that everything I wanted to do with Teysa I was able to accomplish with other decks. And so I decided to tear apart Teysa and rebuild the deck as Athreos, God of Passage.

As Athreos, the deck would move away from a heavy reliance on tokens and would instead try to leverage Athreosâs passive ability to keep creatures I own coming back as a benefit. It was the phrase âyou ownâ that made me smile the first time I read the psychopomp. The card that sprang to mind was Endless Whispers. In this combination, any time a creature I own (and control) dies, it ends up someplace else. When it dies the next time, Athreos is triggered, as I am the owner of the creature on its way to the graveyard. For some reason, this interaction fills me with unbridled joy, and I set to build a deck around this little quirk.

I decided to approach the building process a bit differently than how I usually start a new deck. Instead of simply poring through my collection, picking out every potential inclusion, and then whittling back, I first went to a pen and paper.

When I write, I normally will make notes in one of my various notebooks. I find that my best pieces correspond to the ideas that have the most associated chicken scratch. I have drifted away from my Luddite mode from time to time, as my sinister left-handed scrawl is quite illegibleâsometimes even to me.

An aside: My handwriting is so bad that, at my wedding, I was reading my vows. I came to a point when I couldnât decipher what I had written. I announced this to the guests, all of whom laughed, especially those who knew me well. I recovered to the point that, after the ceremony, my aunt asked if I had planned the joke.

So why did I go back to pulp and ink? Athreos, God of Passage represented something entirely new to me. The entire conceit of the deck was going to revolve around interacting with my adversaries and playing politics. Other commanders I pilot can play the Game of Thrones, but they donât understand all the rules. The last deck I built to try to play the game off the table was my take on Vorel of the Hull Clade and wanted to use Vorelâs ability to make friends. Then, I started playing the deck and came to see it was better suited to play a more direct game. I did not want Athreos to meet the same fate.

On paper, I was able to make connections. I drew lines from one card to another and was able to note synergies and learn the inner workings of the deck before sleeving it up. Working everything out beforehand, before I start rifling through cards, allowed me to make use of one of my many useless skills: a partially encyclopedic knowledge of obscure Magic cards.

Yesâfor some reason, I can remember the impressions of the vast majority of cards that have come out during my history with the game. When a quick trip to a card database confirms my initial idea, I rue the fact I canât remember day-to-day tasks, and then I go back to building a deck.

So I began with Athreos, God of Passage and Endless Whispers on lined paper. These items helped to guide the rest of my process: I knew I wanted creatures with a natural road to the graveyard, and I knew I wanted to use them to win friends and influence people.

The first place I looked was to my outgoing Teysa list. The retired commander did field an army the members of which knew how to sacrifice themselves for a cause. I already have a love affair with both Shriekmaw and Bone Shredder. With Endless Whispers in play, they become bartering chips in an alliance. I decided to look for more creatures with either evoke or echo, and I came across some all-stars. Karmic Guide was a no-brainer, and Wispmare is exciting as an option to help handle the single most annoying card type in Commander. Wispmare, in a humorous turn, could be the card that comes back to bite me the most, as we will see later.

I also went back to the standards of Burnished Hart and Necrotic Sliver. Again, with an Endless Whispers, their deaths add another layer to gameplay. Without the enchantment (or Athreos), they remain strong inclusions. I also added some goodies from Dragons of Tarkir, as gifting Sidisi, Undead Vizier and Vulturous Aven strikes me as a fun thing to do. There is an arrow drawn on a scrap of paper connecting echo and exploit, indicating that the two mechanics are linked in my mind.

Almost directly underneath this line is a cluster of cards that enable sacrifices. Exploit was one such outlet, but a string of some of my favorite cardsâPhyrexian Plaguelord, Helm of Possession, Stronghold Assassin, and Mortarpodâappeared on the page. Even without the key supplemental enchantment, this package can do work against the threats of multiple opponents.

I then settled on cards that I would actively want to give away as elements of a deal. Flickerwisp, Entomber Exarch, Razor Hippogriff, and Custodi Squire can be used on my own investments or they can be made use of to make some friends. Following the advice of my friend Andrew, I opted to include Arbiter of Knollridge as a way to keep the game going as long as there is life to be had.

Coming back to my Wispmare comment, I realized early on that this deck would have a strong enchantment subtheme. With two key cardsâAthreos and Endless Whispersâbeing the same card type, I wanted to make sure that what may be my favorite card type for Commander received the support it needed in this build. Custodi Squire was already jotted down, and soon thereafter, Treasury Thrull joined the squad. As commanders themselves were now immune to tuck, I moved toward Aura-based removal as an attempt to contain unruly commanders. In quick succession, I added Arrest, Faith's Fetters, and One Thousand Lashes, as I could regrow these bits of removal. Global enchantments that found a home included Debtors' Knell, Grave Betrayal, Palace Siege, and Purgatory. Purgatory also has the neat ability of letting me prune my graveyard.

This led me down the path of cards that could then manipulate the graveyards of my allies and adversaries. Cemetery Reaperâone of my favorite cards everâmade it into my list, followed by Mimic Vat and Corpseweft. Together, these cards can make sure that pesky creatures that die stay dead and donât come back for more.

The last card I knew I wanted to include was Homeward Pathâbecause I will sometimes want to reset my shenanigans.

From pen and paper to card and sleeve, here is my Intentional Athreos deck: 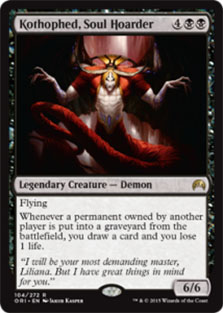 This guyâhe also talks about creatures I donât own.

In the same article in which I decided to retire Teysa, I discussed my desire to build an Anafenza, Kin-Tree Spirit deck. Well, thanks to this spoiler, that idea has been rekindled. 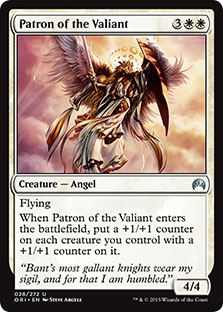 Suddenly, I am excited to pair this card with the Spirit Anafenza and Mikaeus, the Lunarch. The outlast âlordsâ from Khans of Tarkir and High Sentinels of Arashin also play very well in this deck. Toss in an Echoes of the Kin Tree and maybe a Nykthos, Shrine to Nyx to power everything out, and I may have just found my next project.