The dust on Eternal Masters is still swirling, mostly thanks to the wingbeats of Peregrine Drake, but we are mere weeks from Emrakulâs impending descent and Eldritch Moon. While we are a few days short of a full spoiler a few commons have piqued my interest.

It is important to understand the somewhat dramatic shift Pauper has undergone since the release of Eternal Masters. The metagame is in such a state of flux that Delver, a deck at or near the apex of standings for years, is currently struggling to hold on to a Top 5 spot. The best decks have access to the Peregrine Drake combo and the ability to keep a game going until it can assemble the cards to just win. As discussed last week the best versions of these decks have control elements and rising up to combat them are a plethora of hyper-aggressive decks that are attempting to go under.

The end result of this is a dearth of midrange strategies. Pauper midrange has been about figuring out the best way to control the battlefield through removal. While poles have always existed, the current extremes are so far from each other that a deck capable of handling either end is tough to come by. Mono-Black Control and Izzet Control both attempt this and have put up respectable numbers but have yet to find firm footing.

Drake decks represent the late game end of the spectrum. The opposite side of things has some familiar faces like Stompy, Goblins, and Affinity. Joining these are two former fringe decks and one relative newcomer. Elves is perhaps the non-Drake deck that has gained the most from Eternal Masters. Shifting Elvish Vanguard from rare to common has given the deck and explosive offensive option to pair with Timberwatch Elf. It also provides a threat that is resilient to Crypt Rats and other sweepers giving the forest dwellers some much needed punch against board control.

Hexproof had a down season in Shadows over Innistrad. It saw its position in the metagame supplanted by a five-color version that eschewed raw power for perceived utility and cards like Dead Weight. Those days are gone as Hexproof has returned to its roots of putting Ethereal Armor and Ancestral Mask on hard to remove creatures and going to town on a life total. No doubt this deck has surged in popularity due to the new supply of Masks thanks to Eternal Masters.

The last deck that has seen a sudden surge in popularity is a new take on Red. Previously, Lightning Bolt had three aggresive homes. In Burn, Lightning Bolt was the best card in a greater puzzle. When paired with Kiln Fiend and Nivix Cyclops, the three damage instant added to the overall game plan while potentially clearing a path. Finally Goblins used Lightning Bolt as a truly flexible utility card. Well, a new deck has rushed into the metagame trading the tribal synergy of Goblins for Haste.

The Pauper version of Red Deck Wins loves attacking for two. It has traded in Mogg War Marshal and the Goblin Sledder/Mogg Raider tandem for Valley Dasher and Mudbrawler Cohort. The card that makes this deck work is Goblin Heelcutter. In RDW, the Fate Reforged standout not only turns on Mogg Conscripts, Goblin Cohort, and Jackal Familiar, it also comes down early enough to turn off the enemyâs early defenses. The ability can force bad blocks while piling on the damage. A perfect draw from RDW could end the game as early as turn four, which is exactly where you want to be when beating down is the plan.

Red Deck Win and the other decks discussed are all about winning the game early. Their popularity has led to various decks returning to Prismatic Strands and Moment's Peace. Thanks to Vintage Masters the metagame also has access to the two turn stopgap of Tangle (which may have something to do with the rise of the hasty Red deck). But what happens if you want to go to the other end of the spectrum? Given the current landscape, the late game decks are heavily reliant on maintaining a solid mana base. Attacking them on that axis, provided you can survive, is a potential path to victory. If you want to go over the metagame, sometimes the best way accelerate to the final stages. To that end I returned to my old friend, Eldrazi Green.

Eldrazi Green is a true ramp deck. When working on it I tried as much as possible to adhere to Zvi Mowshowitzâs concept of Hypermana. The basic gist (seriously read the article, itâs great) is that everything in the deck is either mana or a threat. I decided to give the deck a run in the league and it did not go as well as I had hoped.

Thermokarst, Mwonvuli Acid-Moss, and Reclaiming Vines were all solid inclusions. The Arbor Elf/Voyaging Satyr combination with Utopia Sprawl and Wild Growth could do obscene things with mana early. Aurochs Herd could end games, and Fierce Empath is a strong tutor (provided the mana exists). Pulse of Murasa seems to be exactly what this deck wants as it provides a life buffer while also keeping the threats coming.

The switch from Llanowar Sentinel to Scion Summoner was a mistake. Summoner is a fine card but would have been better served as Nest Invader. The other problem with this deck is it fails an important aspect of the Hypermana test; it cannot turn its mana development into threats. Considering how the league played out I was ready to completely discard the deck.

But then two different Eldritch Moon spoilers hit the scene and I decided to not right-click delete. 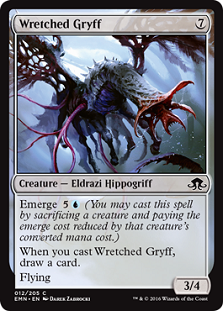 Wretched Gryff is a heck of a Magic card. In Pauper the gold standard for this effect is Mulldrifter, but that 2/2 body dies to so much removal. The Eldrazi Hippogriff has 4 toughness so it survives Lightning Bolt and Disfigure. A hand with Arbor Elf and two Utopia Sprawl can have this down as early as turn three which is a Tarmogoyf level threat. Utopia Sprawl can also be set to Blue so the Gryff can be Emerged for a different turn three cast. While this avenue stunts potential development down the road, a 3-power flying creature on turn three can end the game rather quickly.

There are plenty of other applications for Wretched Gryff, it can be cast with the UrzaTron and gives every non-Blue deck access to a seriously card neutral threat, but that is better left for the set review.

The other card that could slot into a Hypermana strategy is Ulvenwald Captive.

I know, this card looks a bit junky. A 2-mana elf is nothing special in a format with access to Elvish Mystic and its antecedents. Ulvenwald Abomination is a threat in its own right, and the fact the Captive is not a dead top deck late is extremely attractive. What is also enticing is Pauper has access to Overgrown Battlement. Now defender is not a liability but a boon. It is possible to build an Eldrazi green deck that has a top end of Gryff with early mana development turning monstrous and going on the attack.

I do like having access to some turn one acceleration so perhaps a hybrid version of the deck would be more successful. Here we have Arbor Elf and Utopia Sprawl supplemented by Ulvenwald Captive and Overgrown Battlement. The threats have been diversified and Reclaiming Vines gets another slot due to flexibility.

There are plenty of other cards coming in Eldritch Moon and I for one cannot wait to see what the tentacled monsters are supplying for Pauper.