Didnât we just do this? With Conspiracy: Take the Crown still close enough to be an object in the mirror we already are on our way from Fiora to Kaladesh. After a visit to war-torn Zendikar and the rent reality of Innistrad, a sojourn to the wonderfully bright world of Chandra Naalar, Saheeli Rai, and Dovin Baan sounds lovely.

As a long time player I have to say it is nice to visit a plane that is not obviously on the brink of something obviously catastrophic. Now I am not so naive as to think nothing will happen during the events of Kaladesh and Aether Revolt, but I am going to soak up all of the optimism dripping from every card in this set.

Now we are only one weekend into previews but already we know the three major mechanics. Energy, Fabricate, and Vehicles all add an interesting element to Magic, and if current design trends hold true all three will have some impact on high level Standard play. Pauper, well thatâs another thing entirely.

Pauper is a format with a lot of internal momentum. Given(almost) the entire history of commons it can be a challenge for new cards to make their presence known. There are exceptions. If a card latches onto an existing strategy and synergy it can easily find a home. The other way a card can make an impact is when it is so clearly powerful that it demands attention. Vehicles and Fabricate lend themselves to the former avenue toward being played while Energy is something new and exciting. 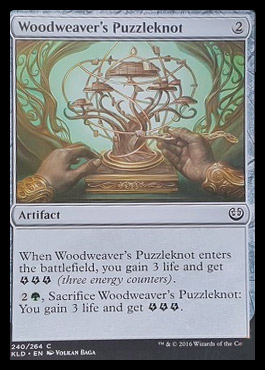 Energy represents a new resource in Magic. Cards that generate Energy counters do so in different ways â so far weâve seen permanents hitting the graveyard and lands entering the battlefield â and the counters go to the player. Unlike stored mana Energy does not dissipate upon a change in phases. Instead they are stored until spent a la Pentad Prism. While we have not seen any common executions of the mechanic the Mechanics Panel at PAX West provides some insight.

At common we can expect spells that generate a small amount of Energy and can then consume the same amount for a reasonable effect. Given that Mark Rosewater has freely admitted that recent sets have been on the more complex side of the scale we can infer that most commons that bring along Energy will do so via enter the battlefield triggers. My best guess is that these cards will be Kaladesh flavored takes on cards like Icatian Javelineers. It is possible that some commons will be Energy sinks, meaning that if a deck can generate a ton of Energy it can put it to good use.

Can Pauper take advantage of this mechanic? I am cautiously optimistic. Being a counter, Energy does interact quite favorably with Proliferate. While Spread the Sickness and Fuel for the Cause may be too expensive to find a home, Volt Charge and Grim Affliction have effects that are desirable if they can do more than their mana cost. The Energy is absolutely palpable with both Thrummingbird and Steady Progress. If we see Energy as mana then suddenly Steady Progress becomes an instant speed cantrip ritual and Thrummingbird is a Elvish Mystic that can save up fuel for later turns.

So why caution? Because Energy has the chance to be absolutely gross. If left unchecked an Energy deck could achieve Tron levels of a mana analogue. Live Fast, Die Young, and Woodweaversâs Puzzleknot show some of the possible implementations of the mechanic. The Puzzleknot plays in a familiar space with cards like Glint Hawk and Kor Skyfisher. Energy may be a key to making decks featuring these cards be able to advance their game state without sacrificing tempo. Often Glint Hawk would return an Ancient Den or a Prophetic Prism for minimal gain. Reusing a Puzzleknot could mean a bust of Energy for any late game outlet.

The Black duo work very well together. Die Young means that any deck that is hoarding counters can turn the spell into a slower Tragic Slip. Stapling a bonus onto a slightly more expensive Night's Whisper that can then convert said gravy into something else later (on top of the cards drawn) opens up tons of possibilities. I cannot wait to see what other ways we can use Energy and am excited at the opportunities the mechanic presents. 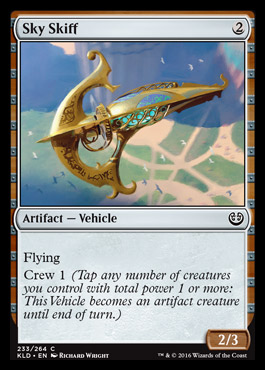 Vehicles present an interesting puzzle. The only one spoiled so far â Sky Skiff â represents a simple way to upgrade a 1/1 creature into something larger. Having to have a creature every turn leaves these cards doubly vulnerable to removal. The upside is that it protects the Crew from combat. I am hesitant to make a judgement on these cards, but unless the payoff is rather high I have a hard time imagining Vehicles seeing play. The best case scenario is with your typical overcosted high power common. If something like this exists I could absolutely see a deck like Elves run one out there since that deck has access to Quirion Ranger and Nettle Sentinel to untap the Crew and Priest of Titanina to generate the mana necessary. Lys Alana Huntmaster could likely Crew any Vehicle on its own with the help of its tokens.

Finally we come to Fabricate, the mechanic that is easiest to evaluate. Why? Pauper already has access to a familiar card in Sandsteppe Outcast. The ability to either generate a token or extra power is nothing new and Sandsteppe Outcast hovers on the fringe of playable. Fabricate makes a much better case for being played thanks to the fact it creates Artifact tokens.

Ghirapur Gearcrafter is a Red version of the Outcast that lacks the ability to increase its power. While also on the outside looking in it comes in the right color for activating the Metalcraft on Galvanic Blast. It is this element that pushes Fabricate cards firmly toward finding a home.

Outside of Affinity, there are a few archetypes that rely on Metalcraft to push their agenda. Kor Skyfisher based midrange, either Boros or Jeskai flavored, rely heavily on Artifacts to clear a path to victory. Galvanic Blast is a great finisher when paired. with flying creatures. Boros and Jeskai Midrange serve to benefit from Fabricate by either generating more Artifacts or through making better attackers. Glint-Sleeve Artisan could become a reasonable attacker in these decks, something sorely lacking from the army of 2-power creatures. Similarly Kor Skyfisher plays nicely with Fabricate, allowing creatures to either generate multiple tokens or finally level up if needed. If there is a one or two casting cost creature with Fabricate it could see heavy play. Ideally I would love to see a 1-drop 0/1 with the ability as it would play nicely with Thraben Inspector.

Still in the midrange camp are Bleak Coven Vampires decks. These decks usually also feature Thoughtcast as a way to reload on cards. If there are Fabricate cards in any of these colors, the Vampire Metalcraft decks could find a way to clog the ground while setting up for their game ending play.

Finally there are aggressive Metalcraft strategies. Boros Metalcraft tries to leverage Galvanic Blast as a sledgehammer and not a utility knife. There is also a Mono-White version that cheats on land and instead relies heavily on Ardent Recruit, Court Homunculus, and Auriok Sunchaser to assail a life total. The ability to have either an on curve creature or spreading the power and adding a Servo fits right into these strategies. 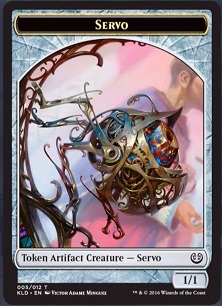 Speaking of Servos, these tokens play incredibly well in decks featuring Rally the Peasants. Going wide is a tried and true method in Pauper and Fabricate gives these decks the flexibility to either commit a singular or multiple threats to the board. Simply put, Fabricate is made for Pauper.

We are still early on in spoiler season and there are sure to be many more wonders from Kaladesh left to be explored. Be sure to check back later this week for my exclusive Pauper spoiler.