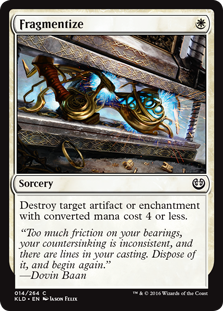 Kaladesh keeps producing marvels. So far weâve seen powerful bullets like Fragmentize, important pieces like the Puzzleknots, and an entirely new resource in Energy. Combine this with the setâs focus on Artifacts and we have a release that has the potential for serious Pauper impact.

No matter what Kaladesh will be important for Pauper. On September 26th, the Monday after the Prerelease, the community will know if it will live under the shadow of Peregrine Drake until January 27th, 201, the day Aether Revolt comes to Magic Online. If I had to guess I would say that Drake is going to be banned.

Why? Well shortly after Drake was spoiled Adam Prosak said that if they knew that Cloud of Faeries was going to banned in Pauper they would have reconsidered putting the same mechanic at common in Eternal Masters. Once Eldritch Moon hit the scene and Drake remained legal the Daily Magic Update has made a few references to how powerful the deck is and likened it to Modern Splinter Twin. We know how that story ends.

If you follow me on Facebook and Twitter you may have seen some charts discussing Peregrine Drake. If not, I encourage you to do so, but hereâs the information. First up is a running tally of Peregrine Drake decks, that is decks that use the Peregrine Drake/Ghostly Flicker/Mnemonic Wall cycle to establish a winning position, against Affinity, Mono-Blue Delver, and Stompy. The graph measures the cumulative volume of these decks in the metagame. So what does this tell us? 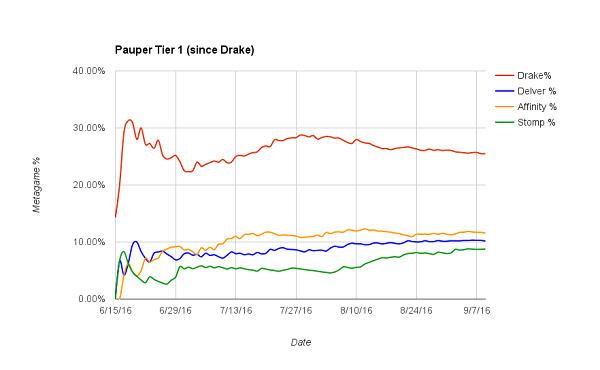 Since itâs release into the Pauper metagame Peregrine Drake decks have accounted for over 25% of all undefeated decks (at the time of writing). For almost two months there has been a one in four chance a deck that has gone 5-0 includes the Peregrine Drake kill. In the same time span if you added any two of the next three decks together they still would come up short of Drake. Affinity has settled in around 11%, Delver at 10%, and Stompy at 9%.

A common argument I hear against this grouping is that it is unfair to have every version of a Drake deck grouped but not to do the same to the various decks featuring Delver of Secrets. I disagree. Every Peregrine Drake deck features the same mechanism used to facilitate a win. Whether that win is flooding the board or a Rolling Thunder, it still relies on the three-card-monte described previously. The various Delver decks all go about their business differently. Traditional Delver is a skies deck while Izzet Blitz is a combo deck that only uses Insectile Aberration to make it easier to kill with Nivix Cyclops of Kiln Fiend. Dimir Delver looks like an aggro-control deck but instead of taking to the air it clears the ground. Sure, various builds of Drake might get to the engine in different ways but the result is always the same â unbound resources. Delver decks might all look to cheat on mana but their spells donât actively generate the resource.

Moving on the second chart looks at every league result and plots Drakeâs percentage of a daily metagame. 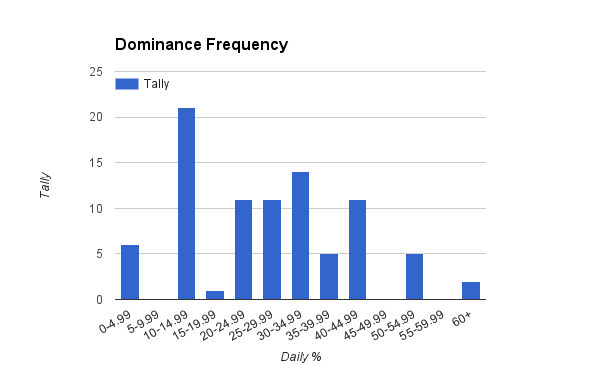 Most often Drake appears as 10%-14.99% of the undefeated metagame. In 87 events it has reached this plateau 24.14% of the time. Thatâs not too bad. However once we look at the middle of the chart we see that it is far more likely for Peregrine Drake decks to make up more than 20% of the metagame than less. In fact Peregrine Drake decks most frequently make up between 20% and 45% of a daily metagame. This is in line with that 25% number from the previous chart. These numbers demonstrate a dominance and it would not surprise me to see the flyer placed on the ban list.

The ban taking effect is still three weeks away. What should you do if you want to play Pauper in the interim? Iâve been enjoying two different decks and would recommend either one. If you really do not want to lose to Peregrine Drake I would look to a few weeks ago where I first discussed Rakdos Reanimator.

I started playing this list and I have to say â it was a blast. The deck is a challenge but once you learn how to sequence the plays properly it becomes something special.

The goal is to get an Ulamog's Crusher into the graveyard alongside a Dragon's Breath and then cast Exhume to build your own eldritch horror. I had done work on Blue versions of this deck before, using Careful Study, Thought Scour, and Owl Familiar to facilitate the combo. I found it was never consistent enough and eventually shelved the deck. The Red version, without Ponder and Preordain, looks like it would be also be prone to awkward draws but there are some innovations in the deck that help in that vein.

The printing of Insolent Neonate gave the deck a turn one play that it needed. Hapless Researcher was good but Neonate is miles better. Menace means it can get in for damage and the ability to discard first helps to turn the Stinkweed Imp engine on. Being able to immediately get five new cards into the graveyard is strong enough for Modern and makes waves in Pauper as well. Tormenting Voice and Faithless Looting let the deck throw key cards into the graveyard while also drawing into more gas.

What I found to be the most inspired part of the deck was the inclusion of Sandstone Needle. When paired with Manamorphose this land can cast almost every card in the deck. Alone it casts all the cards that help dig to combo pieces. Finally it enables the deck to hard cast an Ulamog's Crusher if needed.

The Needle also helps to enable a turn two Crusher. Yes, it does need some set up but as hard as one would think. A turn one Sandstone Needle can provide access to 3 mana on turn two â enough to cast Neonate or Faithless Looting and get a Crusher into the bin for Exhume. Manamorphose helps the likelihood of this event and it has happened more times than I thought it would going into testing.

Reanimatorâs weakness in Pauper has always been graveyard removal. Bojuka Bog and Relic of Progenitus are commonplace and cards like Faerie Macabre are seeing more play as a way to fight Peregrine Drake. They just so happen to totally ruin the Exhume plan as well. This is another reason why I prefer the Red version of this deck as both Insolent Neonate and Lightning Axe allow you to pitch another threat after the resolution of exile. The ability to have an inherent counter to the best plan against you is a reason to consider the deck.

Rakdos Reanimator is a glass cannon. It can work wonders against Peregrine Drake decks because of how much time those decks take to set up. I found that both Stompy and Delver are tossups and with the sideboard as presented above Affinity was a problem. Really, any deck that can flood the board early and override the Annihilator trigger can be troublesome. Mono-Black Control and Jeskai Midrange are both miserable matchups due to the abundance of removal. Thankfully those decks are not very popular at the moment.

After multiple league runs this is where my list has settled:

Last Rites is a hell of a card. When it resolves it can absolutely decimate a plan while perfectly setting up your own. The Gurmag Angler main gives another threat but itâs the sideboard where I made the most changes. Having Ingot Chewer against Affinity goes a long way to keeping that deck in check early. Something as simple as Evoking it on turn one and bringing it back on turn two does wonders for the win percentage. Swirling Sandstorm has replaced Martyr of Ashes mostly because I never found I had spare Red cards in hand when I needed to pop the Martyr while Sandstorm does great work in clearing out anything on the ground.

What about if youâre less concerned with beating up on Peregrine Drake and want better game against the field? A new implementation of an olde experiment has hit the scene as so far has put up a few undefeated finishes.

Grixis Delver is quite the deck. It builds on the pedigree of Dimir Delver but ignores Black removal spells for Lightning Bolt. It also adds another threat in Thermo-Alchemist, the reason to go Red.

I have not played much Modern or Legacy but running Thermo-Alchemist feels akin to watching Young Pyromancer spit out tokens. The truth is Pauper is never going to get a card on the level of Young Pyromancer but the Alchemist comes close. In Grixis Delver the card not only blocks early but it can set up scenarios where the deck can win from nowhere. The abundance of cheap card filtering spells means that it is common to get four damage out of the card in a given turn. And if you have two on the board, things get out of hand very quickly. While I am not always a fan of Manamorphose the card does good work in these builds. The Modern Storm staple not only triggers both Delver of Secrets and Thermo-Alchemist, it also allows the deck to shave Black sources for Gurmag Angler and Sultai Scavenger.

Grixis Delver operates on an axis of efficiency. Every card works cohesively in the deck creating a network of interlocking pieces. The spells all work to turn on the cheap offensive threats while also filling the graveyard for the late game.

And these decks only scratch the surface of what Thermo-Alchemist can do. The same shell can be applied to a Temur flavor of the deck which can then run Hooting Mandrills and Nimble Mongoose. As other colors get access to cheap filtering spells I can imagine multiple versions of Thermo-Alchemist decks.

So this is where Pauper is as a format. Peregrine Drake is here for at least the next few weeks and entering the fray means being prepared. Either you can target Drake or the rest of the format. No matter which path you choose there are opportunities to innovate and enjoy Pauper before Kaladesh arrives. Hopefully the new set will bring a new energy to the format.