When the major and minor themes for Khans of Tarkir were revealed, I was giddy. As a curator of a Cube comprised solely of commons, I had high hopes that the fall 2014 set would make an impact. When I first put my Cube together, it leaned heavily on the morph mechanic from Onslaught block to make for interesting combat scenarios, and I am always on the lookout for powerful multicolored cards. With both morph and wedge as central pieces of the block, I felt what seemed, at the time, to be a reasonable amount of excitement.

My expectations, while based in reality, did not take modern design sensibility into account. The hope for combat-altering creatures with morph and a plethora of high-powered common gold creatures fell apart as the set was revealed. Rather, these mechanics worked in concert to help create a balanced Limited environment. Morph was given some hard and fast rules (no Morph cost under 5 would blow out another face-down creature in combat), and in line with New World Order, it would be far less complex than it was in Legions, where morphs had to double as spells. Khans of Tarkir only has one cycle of common gold cardsâall based around the clans and their respective wedges. None of these cardsânone of the new morphs and no new gold cardsâhas made the cut for my Cube.

Earlier iterations of my Cube featured far more morph. Battering Craghorns slammed into Daru Lancers while Zombie Cutthroats ruined well-planned blocks. This was partially due to the cards I had on hand and also because I enjoyed the way morph played in combat. As the availability issue dwindled and the power level grew and themes became better defined, creatures with face-down modes found themselves on the outside of the box. Currently, my Cube features seven morphsâone in each color except for blue. They are:

These all come from Legions, where the creatures-only theme necessitated morph triggers to replicate instants and sorceries, or Time Spiral Block, which was just crazy. As other creatures with morph were eventually cut, these remain largely because the spells they cast are so effective. Out of all the new creatures at common, perhaps the best one that mimics a spell is Ponyback Brigade, but being a wedge card means that it would go unsupported in my stack. For the time being, in order for one who practices the obfuscating ways of dragon magic to make the cut, one would have to be at least as good as those listed above. In other words: an easy two for one.

But what if I did not have this rule? Instead, letâs postulate that I were building a Cube in which bluffing in combat mattered more; what would make the list? In this scenario, I would want cards that could break stalemates. Battering Craghorn and Daru Lancer both fit the bill, as they can dominate any combat. From Khans of Tarkir, I would keep an eye on Woolly Loxodon, as that card can just dominate any combat. Above this, though, I would want morph to exist in volume. Giving each color access to four creatures with the option to be cast face down in a three-hundred-sixty-card Cube would provide a morph asfan (the number, on average, appearing in a pack as itâs fanned out) for a fifteen-card pack of just under 1. This makes it common enough to matter while also leaving some amount of guesswork. Pushing hard toward morph can change the nature of a Draft environment, making 3 toughness matter more and making sometimes-castoffs like Swat and Prohibit into true all-stars.

The wedge commons are all incredibly sweet cards. Individually, they are powerful and should provide a ton of play to the Khans of Tarkir Limited environment. However, I cannot justify adding them to my Cube at this point. There is barely enough support for a healthy section of cards supporting each two-color pair. The shard combinations have fallen by the wayside, and for the time being, so shall the wedges.

Only two years after being gifted the Gates of Return to Ravnica, here come ten more common dual lands. The life-gain rider is just upside hereâwhat matters is how this changes multicolored support in my Cube. Because letâs be realisticâtheyâre finding their way in.

Before this upcoming change, my Cube tallied four hundred thirty-three cards and included twenty-seven colorless mana fixers between lands and artifacts. This gave nongreen fixing an asfan of approximately 0.76. Each pack of fifteen cards had just over a 75% chance of helping to smooth out mana in two- (or more) color decks. By comparison, Khans of Tarkir has a lands-only fixing (not counting the Banners) asfan of 1.24 per pack of fourteen cards. Add in that cycle of artifacts, and that asfan rises to 1.68 per pack of fourteen. Now, this is not the only smoothing available in Khans Limited (morph helps there as well), but it gives an idea of how much fixing needs to exist. In order to approach this, I had to make some changes to my Cube.

After adding the ten Akoum Refugeâstyle lands, I cut one slot from each color. This gives each point on the color pie sixty-five cards and ups the colorless fixing to thirty-nine cards. The current asfan sits at 1.34, which is more than enough for a Draft set with a minor multicolored aspect. 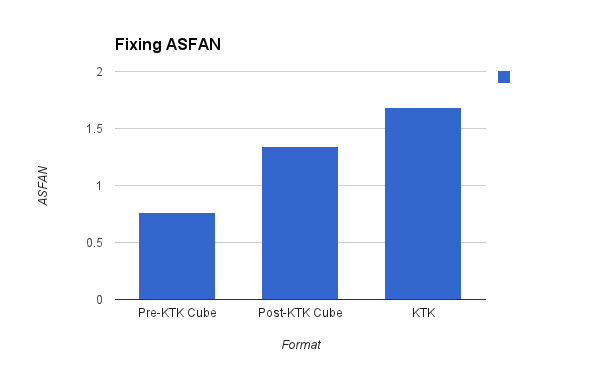 Cutting to the chase, here are the changes I will be making to the Cube once I have acquired the cards (shortly after this goes live):

The ten refuges do not need much explanation. The cuts, however, deserve attention.

The trio of Nyxborn Shieldmate, Nyxborn Eidolon, and Nyxborn Rollicker did not have a high enough impact to warrant maintaining slots in the Cube. They were nice to have during Therosâs reign, but the times, they are a-changinâ. Similarly, Griffin Sentinel, Skyhunter Prowler, Centaur Courser, and Nessian Courser find that the problems they came in to solve no longer really exist. The white cards were there to stall aggressive strategies, but the color now has better options. Similarly, the green 3/3s for 3 were inserted to provide some extra power at that spot on the curve for an underserved color. Green has increased its power quite a bit since those days and has recently added Invasive Species and now receives Alpine Grizzly. While the Centaur twins may be back soon, it is time for them to have a break. Aethersnipe, Festering Newt, Mortis Dogs, and Aura Gnarlid rarely saw play. Deranged Assistant was removed to take acceleration out of blue, and Crocanura got the axe to make way for another creature with reach.

As for the additions, Ainok Bond-Kin and Longshot Squad get the call up to help Selesnya. This color combination already has quite a few +1/+1-counter-granting cards, and these two lords are fine on their own while also being reasonable build-arounds. Level up creatures over-performed for a long while, and I am excited to see if outlast can match the muster.

Mardu Hordechief and Mardu Skullhunter are similar to Ravenous Rats and Attended Knight except they push the issue a little more on the aggressive end. While I like raid, there just isnât enough at common to make my Cube all about attacking. However, encouraging it with these cards can only help their respective aggressive strategies. The Hordechief, especially, matches up nicely with its 3 toughness.

Force Away takes Aethersnipeâs slot as a Simic bounce card. While this card may not come with a 4/4 body, it does come with a potential loot, which is quite nice. I expect this card to find a home with some baloths very soon.

The final three additions just come at a very good rate. Alpine Grizzly, Hooting Mandrills, and Sultai Scavenger all have a high power for their relative mana costs. Knowing how my Cube plays, delving will not be a problem, and the Sultai beaters will often cost 4 or less. I am going to be keeping a close on the Grizzly to make sure the 2 toughness is not a liability. Until then, itâll keep Nessian Courserâs seat warm.

There you have it: the Khans of Tarkir update to my Pauper Cube. If you want to draft it for yourself, the full list is available right here. As for me, Iâm off to do more research on making my personal Limited environment the best it can be.

And by that, I mean Iâm going to find five friends and draft.