UPDATED March 28, 2017: Today the Kickstarter for the Magic Art Show at Grand Prix Las Vegas went live. The art show, taking place June 14-18, 2017 plans to "feature over 100 Magic paintings, sketches, concept art and sculptures in a curated gallery to be enjoyed by the largest audience of Magic players ever gathered."

The Art Show will be divided into four sections based on Planes - Amonkhet, Innistrad, Mirrodin and Ravnica. The organizers are asking for $15,000 and as of this writing are over 20% towards their goal. The funds raised will help cover the cost of displaying and insuring the artwork, as well as making sure it arrives at the venue. Backers are eligible for swag including tokens from Cardamajigs and an exclusive playmat from Zack Stella. 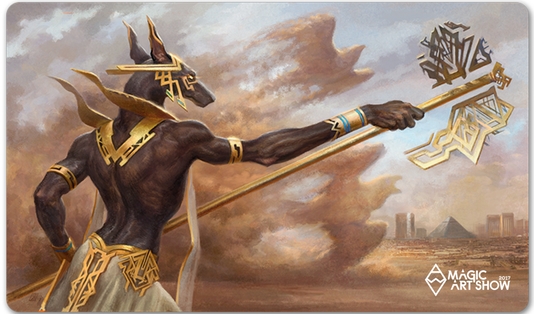 Mike Linnemann, one of the organizers, had this to say about the Kickstarter campaign:

This is the start. Instead of renting walls, lighting and furnishing, that would make any future art show in the same spot, incurring the same large costs. The reason we're going all in to fund it via the community first, is that we then own it, making future art shows considerably easier to do.

Linnemann also had this to say about the project and its potential impact:

Why the art show matters is why the Mona Lisa matters. Everyone knows what the painting looks like, yet people still visit it. Images have power in person, when you get to see the brushstrokes, be part of an experience. That cannot be substituted in any other way and since I am into art, I can add a brand new offering to the Magic community.

Grand Prix Las Vegas is still six month away but it is already shaping up to the the âcanât missâ event of the year. There are going to be three Grand Prix going on in mid-June for the competitive folks and there are sure to be side events galore. This time around, though, if youâre a fan of Magic art then you wonât want to miss Grand Prix Las Vegas.

Mike Linnemann, in conjunction with Cardamajigs, is launching the Magic Art Show. The goal, as described by Linnemann, is âto host a Magic art exhibition that mimics planeswalking itself and sets groundwork for future art shows during Magic's 25th anniversary in 2018." Linnemann will be curating the event and Cardamajigs will act as host.

The show is looking for art to showcase in the project. In order to be considered the piece must have been commissioned by Wizards of the Coast for the Magic brand. All submissions must be sent as a high res .jpeg file along with a brief description (title, media, size, and how it is related to Magic) to info@magicartshow.com, addressed to Mike Linnemann. The submission deadline is March 1, 2017, at 11:59pm CST.

The show will be divided into rooms by Plane and will be open to the public, for free, during Grand Prix Las Vegas. So, if you need something to do before your specific Grand Prix kicks off you can browse the amazing art of the game we love.

Questions about the event can be sent to Mike Linnemann at info@magicartshow.com with âInquiry GP Las Vegas Art Exhibitionâ in the subject line.

Check out the press release for more info!